Tyler Malone’s not letting a wheelchair keep him down 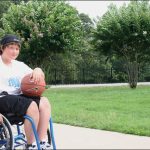 Tyler Malone wants to do something no one else has ever done, something that could affect thousands, if not millions of people. He talks about discovering an answer for paralysis, and his reasons are personal.

“He told me he wanted to become a doctor and create a surgery to fix spinal cord injuries, then he would teach other doctors to fix him,” said his mother, Leslie Grigar.

Three months ago, Tyler was a typical 9-year-old boy, a baseball, basketball and football player, a go-getter and an above-average student. The only thing that is different today is the baseball and football are out; Tyler will never walk again, unless he — or someone else — finds a way to repair severed spines.

The wit, the charm and wisdom remain. Despite missing some school he made all A’s at Mildred, except for an 87 in “stupid Social Studies,” and he still looks at life with wild-eyed excitement. And he still plays basketball.

“I didn’t know about wheelchair basketball and everything, but now it’s fine,” Tyler said.

“He’s accepted it,” said Leslie, as the family often finishes one another’s sentences.

The days after his Feb. 7 four-wheeler accident were touch and go emotionally. There are still rainy days, and more will follow.

But as much as possible, especially for Tyler, life goes on again like it was normal.

Webster’s definitions for the word “accident” vary, but all come back to the first one given: an unforeseen and unplanned event or circumstance.

Tyler was having an afternoon of fun when his life changed.

“I was just riding, and there was a turn coming up and my handle bars jammed,” Tyler said. “I panicked and hit the gas instead of the brakes. I flew up, hit the handle bars and then hit my chin on a pipe fence.”

Tyler blames the paralysis on the strike to the chin. Leslie and her husband, James, are not so sure.

The blow that severed Tyler’s spine at the T-6 Vertebrae — about the chest area — was an impact injury, James said.

“We don’t know if (Tyler’s explanation is) memory or just what he’s decided has happened,” Leslie said. “I was only two minutes away. He was alert; he never lost consciousness.”

After being taken to Navarro Regional, it was evident he had some sort of spinal cord injury, Leslie said. Doctors there were more concerned with a collapsed lung, and he also had several broken ribs. Once stabilized, he was air lifted to Children’s Medical Center in Dallas.

It ended up being a two-month hospital stay, mainly at Baylor for recovery and therapy.

“It took a while to realize I was paralyzed,” Tyler said. “I was on lots of medicine and I’d wake up and couldn’t move my legs, and I’d be in this crazy bed.”

“Before this, he’d never had stitches,” Leslie said.

Kids like Tyler Malone have friends, lots of them. They are outgoing, intelligent and likable. It’s easy to see where he gets it from if you know James and Leslie.

“We thought of (Tyler’s accident) as exactly what it was, a tragic accident,” Cloud said. “We felt for them. With (wife) Kassondra having a brother in a wheelchair we have an idea the adjustments James, Leslie and Tyler have to make. We know it will continue to be a difficult adjustment.

And a number of friends, like the Clouds and their two children, one Tyler’s age, were there. Trips to the hospital were made, the Grigars set up a Web site page so Tyler could communicate with friends, and the community — county-wide — chipped in through fund-raisers. One in Mildred raised more than $10,000, money the Grigars used to outfit Leslie’s SUV with a handicap lift seat Tyler operates himself.

At Baylor, Tyler had classes with an on-site teacher. For a while, he was enrolled in the Dallas ISD. Back at Mildred, it didn’t matter.

“You hate to see that happen to someone who has his whole life ahead of him, but I tried to keep him involved in the classroom,” said his teacher, Julie Waller. “We corresponded with him, sent him a video, and we kept his desk where it was. We always had his name with ours, even when he unenrolled.”

The kids were most curious about Tyler’s return. When he finally did in April, it was as if he never left, Waller said, except for the occasional need to push him through grass on the playground.

He had plenty of takers for that job.

Back at home, the Grigars began to prepare for his return. The home was fitted for a handicap, including a sit-down shower Tyler’s rather proud of. His room was revamped, ramps were installed and in the future the carpet — hard on a wheelchair, and eventually worn down by a wheelchair — will gave way to tile or hardwood. All the lumber was donated and work done by volunteers. The Grigars have about $2,500 invested into work that could have cost a lot more.

“We had a good support group through the hospital and friends,” James said. “We’ve met a lot of people, and it’s been good.”

The wheelchair basketball in Dallas excites Tyler. He finally played some 3-on-3 last week, and he’s part of a team.

It’s just one thing that keeps him busy. He and Leslie swim at the YMCA a lot, too. Recently, he had a friend visit and end up staying the entire weekend, like old times. He’ll spend some time next week with his grandparents, and may visit San Diego, and in July it’s off to Mansfield for a month with his father, Marty Malone.

“Once we got back, and he got back to school, it was like our old routine,” Leslie said. “Things took longer, but it was our same life.”

This is their life now. Tyler knows it, his family knows it.

They still travel to Dallas for Occupational Therapy twice and week, and like Cloud said, there will be rough days.

There are so many moments of triumph now, like Tyler lifting himself straight up in the air out of his wheelchair.

“He thought he’d never be able to lift himself like that,” James pointed out.

“He thought a lot of things,” Leslie said.

“‘I can’t.’ We’re trying to get those words out of his vocabulary,” James said.

Yes, in one regard, Tyler’s still as normal as kids come; he leans on mom and dad when he doesn’t have too.

“If we weren’t around, he’d probably do more,” Leslie said. “Even before the accident, Tyler was dependent on us.”

On a recent trip to the Clouds’ home, Tyler played basketball in the drive with a number of friends. He got no special treatment, Stuart said.

“Adults put more limitations on kids than Tyler and his peers do on him,” Cloud said. “They’re kind of like, ‘Who cares?’ …

“His ability to interact with his friends hasn’t changed, expect that he is rolling.”

Rolling. You have to know Tyler Malone. It’s as if the boundaries a bad day in February created don’t exist.

You talk to his parents and they still get a little choked up. If you talk to Tyler, except for the wheelchair, you’d never know he was anything but a normal 9-year-old.

“He’s already asked to get back out there; he wants a special four-wheeler,” Leslie said. “… It’s hard to convince a 9-year-old to be more cautious.”

“My motto is I’m not handicapped, I just can’t walk,” Tyler said.