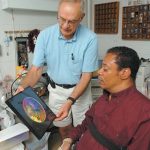 The last thing Kevin White remembers from the evening of his accident is the brilliant June sky and thinking “what a beautiful sunset it would be.”

That was back in 1984, when Kevin, just nine credit hours short of his commercial art degree from Cuyahoga Community College, suffered a spinal cord injury that left him a quadriplegic confined to a wheelchair.

“A friend was driving the car,” he says. “We were just going home, and I just happened to be a passenger. I only go by what they tell me, that we were blindsided by a drunk driver. No one else got hurt out of that … And that was that. We were almost there, just three blocks from home.”

The first few years following the accident, Kevin focused on surviving. “I always had art in the back of my mind, but I knew I had to rehabilitate first. My main concern was to get up and get walking again.”

His family tried to care for him, but Kevin says the demands were too great. “They had their own lives to live,” says Kevin without a trace of bitterness in his voice. “I think that’s probably the thing to do. I can see it.”

His social worker told him about Broadfield Manor in Madison Township, and Kevin became a resident in 1992. He says the long days with nothing to occupy his mind were grueling; the accident had taken away the use of his hands, arms and legs, but not his creative spirit.

“I had to do something,” he says. “I could not sit with an idle mind. I kept asking the counselor if he could get me a computer.”

Kevin got his wish in 1995. The Ohio Bureau of Vocational Rehabilitation provided a used computer and software.

“It just happened to have an art program on it,” he says. “I said ‘Let me mess around with it and see what becomes of it.”

The package included an interface that allowed him to manipulate the computer’s cursor using a small sensor that attaches to the user’s forehead. Kevin, however, mounted his on the bridge of his eyeglasses.

“It’s like a little microchip,” he says. “I used to have it on my forehead, but I came up with this idea. It wouldn’t stick to my forehead.”

It took several months for Kevin to master the interface and basic art program that came with the computer. He had no books, no tutorials, no online resources or training.

“Just by sitting at this computer every day and practicing and practicing,” he says, explaining how he mastered the software. “Whatever art program I could get, I practiced with it.”

The acquisition of a more powerful computer and a copy of Photoshop allowed him to experiment with layers, gradients and other elements of computer art. In time, he was creating complex designs and planetary landscapes that recall the lovely colors of the sky on that fateful June evening.

Kevin calls it “Acid Art” because it is colorful and suggestive of the hallucinogenic art of the 1960s.

Despite the complexity and quality of the work he was producing, it never ventured beyond his west wing room. Sometimes, due to the second-hand nature and unreliability of the equipment the state provided, his art vanished, the victim of a hard drive crash. Kevin persisted, an artist without an audience. The lone exception was five years ago, when he teamed up with another artist for a two-man show in Cleveland.

Don and Karen Densmore of Perry changed that. Karen met Kevin through a friend at Cornerstone Friends Church in Madison. Don took a personal interest in Kevin’s art and got involved in printing, preserving and promoting it.

“It’s been pretty expensive to meet Kevin,” says Don with a laugh. “We’ve done what we can to help him.”

His assistance includes building a device that allows Kevin to use his right elbow to activate switches that mimic the action of the left and right buttons on a computer mouse. The large pressure points on the device have greatly increased Kevin’s productivity.

Don also cataloged and archived Kevin’s work on an off-site hard drive, made photo prints from the files, placed the work in retail establishments and entered it in area art shows.

Don Densmore says he has cataloged at least 240 images created by Kevin. The images can be printed on demand, with orders placed through a Web site, www.donsphotos.com/kevinwhite/.

“I wouldn’t be out there doing what I’m doing now if it were not for them,” Kevin says. “They have been friends, a help to me.”

Don has also been involved in helping Kevin accomplish his goal of holding a one-man show. At the invitation of Meeghan Humphrey, visual arts coordinator for the Ashtabula Arts Center, Kevin will hold his first exhibit at the center this month. The exhibit opens with an artist reception from 6:30 to 8 p.m. Friday.

Kevin hopes this is the break he’s been waiting for.

“I’m jumping for joy,” he says. “This gives me the opportunity to show people there is an artist in here. Even though I’m not up and about and walking around, I’m still doing what I’m doing, just in a different way.”

Humphrey says she’s “astounded” by the fact Kevin can create such colorful, detailed art with his limited movements.

“I admire him,” she says. “I’m amazed at what he can do. He figures out some way to keep going. … People find his work very appealing. The whole digital art thing is becoming very big.”

Humphrey advanced the $300 to purchase frames for the exhibit. Kevin hopes to recoup that investment plus raise money for a new computer system by selling prints through the exhibit. They range in price from $40 to $70.

Kevin works on a Pentium III computer running an outdated version of Photoshop. He’d like to explore other graphics software, such as Illustrator. His dream is to own a fast Macintosh computer, professional printer and software. Donations toward that cause will be taken at the opening Friday evening, which is open to the public and free of charge.

“They don’t give you a brand new computer,” says Kevin. “They bring you bits and pieces of a computer. … I know I need a new computer and I need it badly. I just got to save up for it.”

Creating his art gives Kevin hope and purpose. He spends six to eight hours a day in front of the monitor, patiently creating his images with the subtle movements of his head and elbow.

“I sit here and I look at the blank piece of paper and I just start putting colors down,” he says, explaining how his art begins. “And the colors start making shapes. If I like it, I go with it, and if I don’t, I don’t. I have no specific plan.”

Kevin says that in addition to making enough money to purchase better hardware and software, he would like to get museum recognition for his work. He’s also interested in commercial design assignments, such as creating logos for businesses.

Ironically, Kevin draws a portion of his determination from a symbol of the very thing that robbed him of his mobility. Displayed on a wall above his computer is a collection of more than 100 shot glasses friends have purchased for him on their travels.

“It’s like a reminder every day that I would not be doing what I’m doing if this accident had not happened,” says Kevin of the shot glasses. “It has to be for a reason. The shot glasses remind me to keep pushing. One day, I really want my art to end up in a magazine and be hung in a digital art museum.”