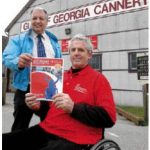 The day was supposed to be like any other. At age 51 Darryl Neighbour, the boss of a construction company he co-owned, was finishing the roof of a house as he had done countless times before.

He was raised by a carpenter of a father; working with wood and nails was in his blood.

He had left his safety harness in his truck as the thought of taking a serious fall hadn’t crossed his mind. This roof was flat and was only 10 feet off the ground.

He stumbled. Fell. An awkward landing broke his back.

“It was as major of a change in your life as you could get, from running a construction company to being confined to a wheelchair for the rest of my life,” he says.

“You have to learn how to start over again.”

Now 58, Neighbour is paralyzed from the chest down and is an ambassador to the Rick Hansen Foundation, promoting a fundraising event aimed at making a difference in the lives of people with spinal cord injury.

Once Neighbour was over the shock of his injury, he was forced to accept the hand given to him. No longer could he build houses, his dreams of playing senior amateur golf were shattered and his marriage broke down.

But golf was his passion and he wasn’t ready to let all his dreams die. His wife was also an avid golfer, and the pair planned vacations around fairways.

He tried the sport in a wheelchair, but it wasn’t worth the frustration.

“I went from playing scratch golf to shooting 90 on the front nine trying to play with one hand. That just didn’t work out.”

He moved to Richmond from the hilly terrain of the North Shore and eventually got involved in wheelchair sports.

“That’s what probably saved my life,” he says.

Wheelchair tennis gave him hope, but curling gave him satisfaction.

He’s now in his fourth year of throwing rink rocks six days a week at the height of the season—and he’s found success.

In April he travelled to Ottawa as skip of the B.C. team, winning the 2007 Canadian Wheelchair Curling Championship. Now he’s eyeing a spot on the national team and dreaming about competing in the 2010 Paralympic Games. He travels to Edmonton in July for his first try at making the national team.

Neighbour says he enjoys the camaraderie and companionship, along with a chance to compete with able-bodied curlers.

He says their first reaction to competing against a team in wheelchairs is surprise.

“I remember our first game in the masters’ league at Marpole. They basically said, after we beat the other team 12 to 1, ‘Who invited you guys?’”

Events like Wheels in Motion and the work of the Rick Hansen Foundation are important to Neighbour because of their support of B.C. wheelchair sports, which can make such a huge positive difference in the lives of those with spinal cord injury.

Thanks to the fundraising event, a wheelchair is being installed in the Marpole Curling Club, which will make it completely accessible to wheelchair athletes.

Continuing to raise money for spinal cord research is equally important, says Neighbour. Like Hansen, he acknowledges that a cure might not be possible for all people with spinal cord injury—considering the time passed and severity of his own injury—but he’s not giving up hope.

“We all dream that someday we’re going to get out of that chair, say goodbye, and carry on with our life,” he says. “I feel like it’s something that I continue to dream. That’s what keeps me going, day to day.”

Rutgers’ LeGrand has no movement below neck after spinal cord injury

A journey to walk again One step at a time