A quarter-century after being paralyzed, soul man Teddy Pendergrass is celebrating quality of life for all.

Teddy Pendergrass is sitting in the Sound of Philadelphia souvenir shop, surrounded by his illustrious past.

Over his left shoulder, that’s the young Pendergrass in white tie and tails, a gruff-voiced powerhouse as part of Harold Melvin & the Blue Notes, for whom he belted out such classics as “The Love I Lost,” “Wake Up Everybody,” and “If You Don’t Know Me by Now.”

Over his right, it’s the fully grown and sexy Teddy Bear, who stepped into the limelight in the mid-1970s. The slow-jam pioneer and bedroom singer chalked up five consecutive million-selling solo albums, and scored smooth-as-silk hits such as “Close the Door” and “Love T.K.O.,” which resulted in his being showered with female undergarments at his famously risque “Ladies Only” concerts.

But that was then. For Pendergrass, now began on March 18, 1982. That’s when he crashed his Rolls-Royce on Lincoln Drive, suffering a spinal-cord injury that left him paralyzed from the waist down.

Such a catastrophic event might not seem like the cause for a commemorative celebration. And Pendergrass, 57, who’s dressed in black with a diamond-encrusted cross around his neck, speaks freely about the ways his accident transformed his life in an instant.

“I don’t want to bore people, or get sappy about it,” he says. “But when you’re giving a sold-out concert in Europe one week and then another one at the Shubert Theater [now the Merriam], and then the next thing you’re lying in a hospital bed not knowing what you’re going to do next, it’s quite devastating.”

But one day last year, Pendergrass realized he had a milestone coming up, and it motivated him to organize “Teddy 25: A Celebration of Life, Hope and Possibilities,” a June 10 gala at the Kimmel Center.

The event, hosted by comic actress Mo’Nique, will feature performances by Patti LaBelle, Stephanie Mills, Kindred the Family Soul, Musiq Soulchild, dance company Philadanco, and a rare mini-concert by Pendergrass himself. It’s a benefit for the Teddy Pendergrass Alliance, the nonprofit organization Pendergrass founded in 1998 that aids people with spinal-cord injuries.

“I was at Magee hospital last October,” the soul singer says. “And it dawned on me that this year was going to be my 25th anniversary. I just thought about how grateful I am, for what has happened, and what hasn’t happened. And that I have actually reached my 25th year, which I never thought I could or would.”

Today, Pendergrass speaks of issues facing people with spinal-cord injuries with the determination that marked his aggressive, full-throated vocal style.

“He’s hardheaded,” says Kenny Gamble, the head of Philadelphia International Records, with Leon Huff. Gamble and Huff were the songwriters and producers who oversaw Pendergrass’ rise from drummer in the Blue Notes to solo stardom. “Even before his accident, I always thought Teddy was the strongest person I knew.”

“I want to educate people about how to treat people in wheelchairs with respect,” says Pendergrass, who lives on the Main Line but won’t say where. “How to talk to them. How to not stand over people. How to get down and low and see people eye to eye, to show them that just because we’re rolling, it doesn’t mean we’re stupid and dumb, or brain-dead. Disability doesn’t mean inability.” 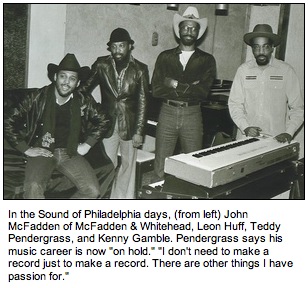 Early on, Pendergrass began demanding that attention be paid. Raised by his mother, Ida Epps (who’s among the gala’s honorees, along with longtime supporters such as LaBelle, Regis Philbin, Whitney Houston and Donald Trump), Pendergrass grew up in North Philadelphia, moving frequently.

“I’m a black man in Philadelphia,” says the singer, who is divorced and has three grown children. “We live so many places.”

When he was 2½, he recalls, he stood up on a chair at the Glad Tidings Baptist Church and sang “If I Could Write a Letter to Heaven.” “I was just a little bitty guy,” he says with a laugh. “I had to be seen. Always been my problem.”

An only child, he came to work with his mother at a North Philadelphia Italian supper club where acts like Connie Francis would perform. The rambunctious 13-year-old sneaked into the showroom and taught himself James Brown’s “Cold Sweat” on the drum kit.

Pendergrass sat behind the kit on his first job in 1968, with a Brown knockoff named Little Royal, who was based out of Halifax, Nova Scotia. “Whoa! That was a big culture shock. I didn’t know there were that many white people in the world.”

He also played the drums with the Philadelphia-area R&B band the Cadillacs, as well as the Blue Notes. He was a careful student of vocal masters from Nat King Cole to Otis Redding, and playing the instrument influenced his vocal style.

“It’s all about rhythm. The drums are the basic instrument for R&B music, and the drums hold all the pieces together and accentuate everything else.”

Gamble recalls, “The first time I heard Teddy Pendergrass, I said ‘Who is this guy?’ Raw talent. Just what we had been looking for. It was a challenge to write for him, because he had such a powerful voice.”

In 1976, Pendergrass split with Melvin, and achieved immediate success as a solo artist. Working with Gamble, Huff and Thom Bell, he forged a satin-sheet seduction style. Only Barry White can claim to have helped conceive more children of a certain age.

He scored with LPs such as Life Is a Song Worth Singing (1978) and It’s Time for Love (1981), and earned a rep as a love man that’s gotten him name-checked on Kanye West’s College Dropout and R. Kelly’s new Double Up.

“He’s just so sexy,” says LaBelle. “I think of him like Marvin Gaye or a Jackie Wilson. No one can turn you on the way he did. No matter what he sang, he just turned you on. And he’s still very sexy in a wheelchair.”

Pendergrass sold more than a million copies of Love Language, the 1984 album that was his first after the accident, during which Pendergrass was trapped in the Rolls for 45 minutes with a transvestite dancer named Tenika Watson. He’s recorded seven albums since, including This Christmas I’d Rather Have Love (1998) and 2002’s live From Teddy with Love.

Now, though, he says his music career is “on hold.”

“I don’t know what I need to keep chasing,” he says. “I don’t need to make a record just to make a record. There are other things I have passion for.” Chief among them is helping people make a better life now, rather than hope for a miracle cure.

“This is not a cartoon. This is not a movie. This is real life. I want to know, after something happens like this, how do you have a productive life in the meantime? That’s what this is about. I’m asking people to help me help others like me.”

Though he may be in semiretirement, Pendergrass says he’s looking forward to performing at the Kimmel Center next Sunday.

“People are going to sing one of my songs, and one of their own, and then I’m going to close the show. And I’m gonna throw down. And after that, I’m not going to want to see a stage for a long time. I want to get to helping those people who this show is going to benefit. We’ve got work to do.”