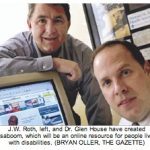 Dr Glen House knows the difficulty of re-connecting with the world after a devas-tating injury, of navi-gating life with a Disability.

House is a quadri-plegic; a ski acci-dent at age 20 cost him the use of his legs and limited the dexterity in his hands. As medical director of the Center for Neuro and Trauma Rehabilitation at Penrose Hospital, he helps patients in similar situations piece their lives back together as they strive for some degree of independence.

Now, he’s reaching out to a wider audience: the 44 million American adults with disabilities. He’s cofounder of Disaboom Inc., which is developing a comprehensive online resource dedicated to transforming the way people with disabilities live.

His partner is J.W. Roth, an investor whose focus is developing and financing startup companies such as Colorado-based AspenBio, a Biotechnology company. Roth is chairman and chief executive officer of Disaboom; House is Disaboom’s medical director.

The two Colorado Springs men have been business partners before. About 2½ years ago, Roth helped House start the Colorado Catheter Co., which developed catheter technologies for the disabled. That company is being sold, said Roth, who declined to disclose details about the deal.

Working with House alerted him to the potential of the disability market, Roth said.

Disaboom, which incorporated last fall, recently raised nearly $3 million by selling shares to private investors. That money is expected to pay the company’s bills for the next year, Roth said. The company also is going public, driven by House’s desire to give people with disabilities, or “Disaboomers,” the chance to be part of it.

“We could not do this as a nonprofit,” House said. “We wouldn’t survive. It takes somebody to get behind it, raise the money and keep it going.”

The company’s Web site, www.disaboom.com, is scheduled to launch in August, though company information already is available there. Patient education will be a key component once the site is active.

“There’s not the information available out there to the patient like I’d like to see it,” House said. He wants to provide in-depth information, a sort of online bedside chat that answers patients’ immediate and long-term questions about conditions such as stroke, spinal-cord injury and brain injury.

House is writing some of the core content and contacting doctors across the country to write other parts. Another aspect, he said, will be gathering and interpreting research for patients and doctors.

Disaboom is also intended to foster a sense of community through forums, chat rooms and reviews written by users, from assessments of products for the disabled to reports on the accessibility of restaurants and other businesses.

“You’re rolling the dice when you’re trying to figure out where to go,” House said. “Handicapped accessible, what does that mean? This will be such a useful resource.”

The site, being designed by Denver-based DATA Inc., also will contain job listings. “Our hope is to launch the Web site this fall with over 10,000 jobs specifically for folks with disabilities,” Roth said.

Disaboom faces hefty competition online, from the medical information offered at sites such as WebMD to social-networking sites such as Dating4disabled.com and My-Space.com. The idea of Disaboom is to bring those aspects together, providing a comprehensive resource for the disabled where, as the site states, “every tool they’ll want or need will be in one place.”

Disaboom users won’t be charged; revenue will come from advertisers.

“We have created a relationship with advertisers that you won’t be charged until we bring users,” Roth said. Disaboom’s registration statement with the Securities and Exchange Commission said it doesn’t expect to generate significant advertising revenues until six to 12 months after the site launches.

“Our whole mission is dependent on being able to attract loyal, continuous users,” Roth said. The goal is to bring at least 2 million unique visitors to the site in the first year.

Nearly 5.8 million shares in the company, at a price of $.50 a share, were bought by investors in the recent private placement. They’ll be free to trade those shares on the OTC Bulletin Board, possibly starting as soon as next week, under the symbol DSBO.

“It is smaller than the Nasdaq and the New York Stock Exchange by a fairly good margin,” Roth said of the OTC Bulletin Board. “Its design is for junior companies, and that’s exactly where we’re at.”

GETTING THE WORD OUT

Disaboom Inc. has several plans for informing the millions of disabled Americans about its Web site.

One is a program to put Disaboom high on search-engine results, said J.W. Roth, chairman and chief executive officer of the new company. Paralympian Muffy Davis, meanwhile, will serve as the face of Disaboom and spread the word at meetings across the country with groups of people with disabilities.

Disaboom is also starting a Colorado Springs-based marketing division with plans to hire 10 to 15 “Web strategists” to do viral marketing.

“The whole goal of that team is to flood the Internet with Disaboom,” Roth said. The company is looking for Internet-savvy people with disabilities to fill those jobs.

“We want to practice what we preach, and part of that is hiring people that have these disabilities,” Roth said.