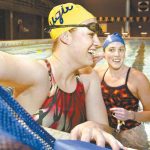 In watching Ramsey Vens dive off the starting blocks at Augustana College in preparation for the CCIW championship now under way, it’s hard to tell that just seven months ago she shattered two Vertebrae in her neck.

The only sign that the former state-qualifying Pleasant Valley swimmer-turned Division III national competitor is lucky to be able to get in the pool, much less compete, is a tattoo on her right ankle of angel wings and the phrase “Miracles happen.”

“I’ve always wanted a tattoo ever since I was 18, but I wasn’t going to get one unless it had meaning,” Vens said. “When I look at it now, it reminds me of all the things that have happened and to be patient, be cautious and don’t take life for granted.”

On July 17, Vens and a group of friends spent their Saturday night at a cabin on Lake Odessa in Wapello, Iowa, and decided to take a late-night swim. A lifeguard and experienced swimmer who has been doing shallow water dives since starting competitive swimming at age 8, Vens ran into the water and dove, hitting her face on the bottom of the lake.

“I knew something was wrong, but I wasn’t sure because I’ve never broken a bone in my life before, so I never knew what it felt like,” Vens said. “I heard a crack in my neck, but I just thought that I maybe hit something out of place or maybe dislocated a bone or something like that.”

Vens had broken her C3 and C4 vertebrae and fractured two others, but her nerves and spinal cord were unharmed so she still retained complete mobility and stayed the night at the cabin with her then-boyfriend, who kept her up through the night just in case she had a concussion.

When morning came, she was unable to move her neck, which was swollen and bulging. She went home, and her dad took her for treatment, where X-rays revealed the extent of the damage.

“I couldn’t believe it,” Cindy Vens, Ramsey’s mother, said. “I thought maybe when he said her neck was broken maybe it just meant that maybe she’s had a crack in the vertebrae … and the doctor was saying that it was pretty amazing that she wasn’t paralyzed already.”

While Cindy was in disbelief, Ramsey thought the fracture meant she would be in a neck brace for a couple of months and be back to normal.

“They didn’t actually tell me what was really wrong until I got to the emergency room,” Ramsey said. “They were coming in and they were doing strength tests on me to see if I could still move my arms and my legs and wiggle my toes, and I was just like, ‘Yeah I can do all this. Are you sure this is what’s really wrong with me?’

Todd R. Ridenour was the neurosurgeon on call at Genesis West Medical Center when Vens arrived. He said he sees 10 to 12 cases like hers each year in which vertebrae are broken but the spinal cord is not damaged.

But Vens’ injury was unique. Ridenour said the swimmer’s injury looked like that of a person who had been thrown from a vehicle going 65 mph.

“She could have very easily damaged her spinal column at the same time,” Ridenour said, adding the muscle mass Ramsey built from swimming helped to keep that from happening.

“She’s a very strong girl; swimmers oftentimes tend to be that way. With less neck or muscle, one could have damaged the neck more severely.”

Even with the extra muscle protecting her spinal column, the surgery carried risks. Vens’ broken vertebrae needed to be replaced with ones from a cadaver and fused together with a titanium plate and six screws. Paralysis was still a possibility, so Cindy and her husband decided to talk to their daughter about a “do not resuscitate” form.

“That was the toughest thing I think for me and my husband to sit there, and I even get choked up now just thinking about it,” Cindy said, pausing to wipe a tear. “To have your 19-year-old kid sit there and say, ‘Mom, I don’t think I can do that. If something happens, I do not want to be resuscitated.’ That’s hard.”

“I was scared out of my mind,” she said. “Nineteen years old, that’s one of the last things you ever think about having to deal with. They started to explain the DNR to me and going through my mind I was like, ‘No, no way am I going to do this.’ But when it came down to it, I had to make a decision. I don’t think I would have been able to live that way.”

The surgery was successful, but the active teenager who loved to swim, run and play football whenever possible was reduced to walking with assistance around the hospital floor and then home to rest. Cindy Vens said although Ramsey and her family were grateful she wasn’t paralyzed, the time she spent being able to move only from her bed to the living room and back again was torture.

“She doesn’t sit for a minute,” Cindy said. “She was always active; she’s just not one to sit.”

Because she was restricted from doing any physical activity, Ramsey altered her diet so she ate only one meal a day and drank water and juice. During the two and a half months her activity was restricted, she lost 27 pounds.

“I was getting really, really weak. I could feel it; I could feel my muscle mass decreasing,” she said. “It was just really rough because there were things that I used to do that would take no effort at all and I would get up to go do something, even just lift up a box, I would be just worn out.”

When Ramsey returned to Augustana in the fall to begin her sophomore year, she was still wearing a neck brace, going to Physical Therapy and was not allowed to carry more than 15 pounds in her backpack. Her doctor predicted she would not be getting back in the pool any time soon.

“She kind of went through a period of I don’t know if I would really call it Depression, but the ‘why me’. Not so much why did this happen to me, but why was I not paralyzed and somebody else is,” Cindy Vens said.

Cindy found the Rascal Flatts song “Stand,” which is about a person who is overwhelmed by life but in the end gets mad and fights to make everything all right.

“One day I played that for her, and I told her that the words in the song reminded me of her,” Cindy said. “Once she got mad and was able to fight, that’s when she started to recover.”

Ramsey said she started going to physical therapy with the mentality that she was going to do everything she could to recover. Just before Thanksgiving, she was released from physical therapy more than a month before her doctor originally predicted and started swimming competitively again.

The only hindrance that remains from her injury is she now breathes to her right side because she has only 70 percent rotation in her neck to the left.

“What is remarkable is how well she’s done afterwards,” Ridenour said. “You always hope that people can go back … But a lot of times people don’t regain the abilities they had before. That is really attributed to her drive.”

Thanksgiving fell halfway through the swim season, and Ramsey returned to the Augustana women’s swim team at the same time as four other swimmers who had returned from foreign term, a program that Augustana offers its students to study abroad for one trimester.

In the two and a half months since she returned, and just seven months after her surgery, Vens holds the top times in four individual events and holds a spot on four top relays.

“I was impressed with what she has done so far with how out of shape she was,” Anderson said. “We have a long season, and luckily, we got her back when we still had some time to get her into shape and see what we can do with her.”

Vens said qualifying for the Women’s NCAA Championships again this year might not happen because of the two months she missed at the beginning of the season. But this weekend, her only goal is to defend her first-place CCIW finishes in the 100 and 200 backstroke.

“Nationals, if I make it, that’s an amazing accomplishment, but it’s not really one of my goals this year; my first goal just was to get back in the pool,” she said. “I just realized that I really was given a second chance to do something with my life and I should be so thankful that I have this opportunity to go out and play basketball and go swimming and just go back to school.”

Directing Objects With Your Mind