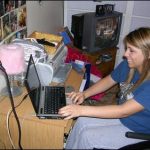 STANLEY — Kayla Spano’s bedroom mirrors that of most other teenage girls.

Keepsakes such as homecoming corsages and cheerleading memorabilia crowd the built-in shelves, and tons of photographs fill frames or are plastered on an adjoining wall. Even more photographs of friends at school and church scroll across the screen of her laptop computer.

Next to the laptop is a combination printer/scanner that Kayla said is one of her prized Christmas presents, allowing her to print the multitude of photographs she takes on her digital camera.

“I like to take pictures,” the 17-year-old said with a wide grin.

The only thing appearing out of place in this spacious but cozy room is the wheelchair to which Kayla is confined. An automobile accident May 15 paralyzed this Stanley High varsity cheerleader and senior homecoming maid. With no feeling from a line falling just below her abdominal muscles, Kayla must maneuver her petite but fit body in a wheelchair that sports a pink frame and wheels that light up when moved.

The wheelchair is a nod to Kayla’s sparkling personality. But it’s not something she plans to get attached to.

Kayla is determined to walk again and she’s going to take a step in that direction, perhaps by March 1, if she is able to raise the needed money to travel to China Medical University in Shenyang, China, where she is already approved for an experimental stem cell surgery.

The surgery, which is not approved by the Food and Drug Administration in the United States, utilizes nonembryonic stem cells taken from an umbilical cord after a newborn’s birth. The cells are injected above and below the spinal cord injury with the hope they will migrate and regenerate the damaged nerves.

The youth group of First Baptist Church in Mansfield is helping Kayla toward her goal by sponsoring a benefit concert and gumbo Saturday. Special guest performers will be Altar’d, billed as a multidimensional progressive worship band from Alexandria.

Kayla needs $20,000 for the surgery and additional money to cover two round-trip airplane tickets and living expenses during the monthlong stay in China.

“Even if I don’t have all of the money by March 1, they said I could come as soon as I do have the money. I’d like to get it done as soon as possible because I will have to stay there for a month after the surgery,” Kayla said.

And she’s got her eyes on the May 15 graduation date, which ironically will make the one-year anniversary of her life-changing injury.

‘I will walk again’

Kayla doesn’t want anyone to feel sorry for her. In fact, she doesn’t like anyone to show her any special attention. The wreck that robbed her of her ability to walk did not steal her spirit, and Kayla is steadfast in her belief that God has a purpose for her life.

Before the wreck, Kayla described her life as being filled with “drama. “» I had drama at high school and drama at home. Me and my mom were hardly talking.”

Kayla had just started attending First Baptist Church in Mansfield, where she fit in with the growing youth group. Her prayers were to be a better Christian. “But I didn’t really know how. I just prayed and I asked God to make the drama go away from my life.”

On May 15, Kayla and Justin Williams, her boyfriend at the time, were traveling on state Highway 5 in DeSoto Parish when Williams, who was driving Kayla’s Mitsubishi Eclipse, apparently lost control or went to sleep at the wheel, causing the car to go off of the road, hit a culvert and begin flipping across the highway.

Williams suffered injuries but was walking outside of the vehicle when emergency crews arrived. Kayla, who had been thrown through the passenger window, was unconscious.

Hooked up to ventilators and immobilized in LSU Hospital’s ICU, Kayla was unable to communicate for days. She has spotty memory of the hours at a mall before the wreck, but none of the accident itself, or of the almost two weeks following her hospitalization.

“My mother didn’t want to tell me at first,” Kayla said of her paralysis. “I remember her asking me if I felt my legs. “» I told her it would be OK. It was like I kind of knew already what was wrong.”

Four discs in Kayla’s spine were fractured. One was a “burst fracture,” which severed a nerve, she said.

From about midchest down, Kayla has no feeling. Still, she describes various sensations at times, such as tingling in her legs.

“It’s like my legs work, but they just won’t move,” she said, punching her muscular thighs.

Although Kayla and Williams broke up after the accident, Kayla does not blame him or anyone else for what happened. She instead holds to a belief that everything happens for a reason and that God is in control.

A day after her release from the hospital, Kayla traveled with the church youth group to a summer camp in Dry Creek, where for the first time she shared her testimony.

But during her hospital stay Kayla said her upbeat spirit and unfailing faith was questioned by some in the hospital. Seven different psychiatrists talked to her during her hospitalization — a month in LSU Hospital and another month in Willis-Knighton North for Physical Therapy — to make sure she understood the reality of her injury.

“But I guess you could say when I woke up I was a completely different person. I told them whether I walk or not, I’ve got a life to live and I’m going to live it. “» But for me, I know I will walk again. I just don’t know when,” Kayla said.

During her recovery over the summer months, Kayla was told by several people about various types of stem cell surgery options. At first she dismissed the idea, saying she doesn’t believe in using embryonic stem cells from aborted fetuses. Someone else told her about a procedure performed in hospitals in Portugal that involves transplanting olfactory tissue from the nasal cavity into the spinal cord injury site.

Kayla did some research and found out that she wouldn’t be a candidate for that type of surgery until her injury is at least 18 months old. Then, an aunt and uncle saw a TV program about the research done at the China hospital that harvests stem cells from the umbilical cord.

Kayla got help in her research from a former Brazilian foreign exchange student who attended Stanley High last year. “We kept in touch and she provided me a lot of information. But then I started communicating with the hospital in China myself.”

Karen Burr, Kayla’s mother, is supporting her daughter “100 percent” and is hopeful they will make the trip to China in March, or at least by April.

“I am ready to go because my baby wants to walk again and I believe she is. We’re doing this together,” Burr said.

Donny Lewing, of Stonewall, doesn’t know Kayla but he knows what’s going through her mind. On Sept. 21, 1988, his motorcycle collided with the rear of an 18-wheeler, leaving him paralyzed from the waist down.

Almost 17 years to the date later, Lewing, then 41, was in Beijing, China, undergoing surgery where olfactory stem cells were injected into his spinal cord. Lewing was almost too old for the procedure, but he had to try it.

And while the results are not what he fully hoped — he wanted to walk again — he has no regrets trying it.

Feeling has returned to about two inches below his belt line, and he often gets a burning sensation on the backside of his buttocks, legs and feet. His hip movement is also much better.

Physical therapy at Doctor’s Hospital and then at LSU Hospital in Shreveport has led to Lewing being able to use crutches to stand up. At LSU, Lewing was placed in a harness and he was able to pick up his foot and swing it with some guidance.

“I guess I could be bummed out, but I’m not. I’m glad I tried it because if I didn’t then I would have always thought what if,” Lewing said.

Kayla wants to have her surgery as soon as she can so that she can work toward her goal of walking to get her diploma on May 15.

“But if it doesn’t happen then, that’s fine. I won’t be upset. I won’t hate God … but you have to set goals for yourself and my goal is to walk again no matter when it happens.”

This fall, Kayla plans to be a freshman at LSUS, where she will major in accounting. Her love of math helped her to decide that she’ll shoot for a career as a certified public accountant.

Kayla has yet to drive again. A host of friends and her mother get her to and from school, church, or to trips to the mall or movies. She is holding out on another car until she sees how she responds to the surgery. If her recovery takes longer, Kayla said she would explore a car adapted with hand controls.

“I’m just going to see how it goes at first,” Kayla said. “I just tell people I have a peace about things. I know God has a purpose and, you know, I could be a whole lot worse.”

Darrell Gwynn ‘comes Home’ As He Joins The Buoniconti Fund To...