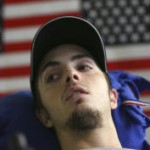 Sugar Land soldier is one of thousands returning home disabled

It was about 1 p.m., and his convoy had paused at a checkpoint near Baqubah, Iraq, northeast of Baghdad, after a report that a man may have planted a bomb. Just the week before, in the same area, an improvised explosive device detonated under his vehicle, damaging the windows.

The team was on alert, but Cannon noticed nothing suspicious.

“I don’t remember hearing the first shot,” he says, “but I remember feeling short of breath.”

Five weeks ago, a sniper dropped this Sugar Land soldier, barely out of his teens. The bullet struck him in the neck, exited his back and left him paralyzed below the waist. As Cannon left the battlefield, he joined a growing procession of service members coming home from the wars in Iraq and Afghanistan not in flag-draped coffins, but casualties nonetheless. 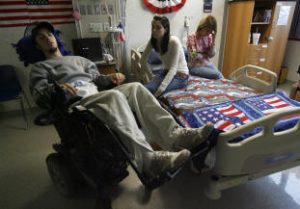 The 3,000-plus death toll may get the attention, but thousands more soldiers are coming home with horrific burns, mangled or missing limbs, head trauma or spinal cord damage. The Defense Department says more than 24,000 have been wounded, about 11,000 of those injured so severely they are unable to return to fight.

Consequently, hospitals run by the Department of Veterans Affairs have seen a sharp increase in patients. In 2006, 5.5 million veterans received services there, compared with 3.8 million in 2000. The VA’s budget increased by $5 billion between 2005 and 2006.

Cannon, whose combat experience totaled about a month, is one of more than 1,700 U.S. soldiers with brain and spinal cord injuries suffered in the campaigns. He is the fourth veteran of the current wars to be treated at the spinal cord unit of the Michael E. DeBakey Veterans Affairs Medical Center in Houston.

Reclining in a motorized wheelchair, he continues his war tale. His wife of less than a year, Heather, also 20, and his mother, Patti Cannon, are among the visitors in his private hospital room. Red, white and blue bunting shares wall space with American flags and numerous messages from well-wishers.

“An Iraqi national, a local, told us that somebody suspicious had dropped something off that looked like an IED,” he says. “It might’ve been a setup, it might’ve been there, but we didn’t know.”

His team leader told him to get down, but Cannon couldn’t move. His hands and feet were like lead. Another bullet ricocheted off the turret.

He learned he’d been shot only after his team leader radioed the others. The convoy was forced to push forward to reach a nearby aid station.

“I didn’t know what was going to happen and I was like, ‘Am I gonna die?'” Cannon says.

His team leader, a sergeant he knew only by last name, Cruser, assured him he would be fine.

“He told me to keep my eyes open and to look at him, and I remember seeing a tear drip down his face.”

At the aid station, Cannon made a doctor promise not to let him die.

From Iraq, he was flown to Landstuhl, Germany, where doctors used bone from his hip to salvage a ravaged portion of his Vertebrae. They reinforced his back with metal rods and pins during a 10-hour surgery.

On Jan. 2, Cannon arrived at Walter Reed Army Medical Center in Washington, D.C., where family members joined him. He arrived at the VA hospital in Houston on Jan. 23, and his family remains at his bedside while he receives daily physical and Occupational Therapy.

During a session last week, Cannon used arm and wrist weights of no more than 3 pounds to exercise his atrophied muscles. His arms function, but Cannon’s milky-white fingers remain mostly lifeless. Janine Copsey, his Occupational Therapist, whipped up some popcorn so Cannon could work his hands.

He also pecked at a computer keyboard with plastic wands attached to his hands. He wants to become dextrous enough to play video games again.

More so, he vows to walk.

For now, Cannon can be counted on to lighten the mood with jokes about the bicycle ride he will take or the spinners he wants for his wheelchair. His sense of humor and “smart ass” sensibilities help him stay positive as he remains “fixated on living hour by hour.”

He quickly became expert at maneuvering his motorized wheelchair, equipped with two controls similar to joy sticks. All of his equipment and medical costs are covered by the VA and will be for the rest of his life. He also can count on monthly VA benefits of $2,300.

VA’s growing numbers
The number of veterans enrolled in the VA health care system is growing. Out of the 5.5 million who received services last year, more than 184,500 saw duty in Iraq or Afghanistan, according to the VA’s 2006 annual report.

More veterans mean more benefit claims to process, and that has led to a backlog of hundreds of thousands. In 2006, the VA processed more than 750,000 claims for Disability benefits and added more than 250,000 patients, the same report states.

In response to the number of soldiers returning with multiple injuries, including head trauma, severed limbs and hearing and vision loss, the VA developed a one-stop-shopping approach to treat soldiers called polytrauma care. It has four primary sites in Richmond, Va.; Tampa, Fla.; Minneapolis and Palo Alto, Calif. An additional 17 network sites, including one in Houston, manage post-acute care.

‘Positive indicator’
Dr. Sally Ann Holmes, chief of the Houston VA’s spinal cord injury unit, shied away from questions of whether Cannon will walk again. It’s too early to assess, she said. He has shown signs of progress — he no longer needs a Ventilator to help him breathe and has regained strength in his arms.

“He does have some sensation below his injury, which is a positive indicator. It certainly makes his chances of walking being better than if he did not have that,” Holmes said. “That being said, he doesn’t have any Motor function below the injury at this point. But, he’s still just a month out.”

For the tasks he can’t do, his wife steps in.

The couple met in March while he was stationed at Fort Lewis, Wash., and they married in August. The first years of any marriage are always hard, he said, noting that his wife “has her days.” But, he’s concluded, if she were going to leave him she would have already.

After he enlisted two years ago, Cannon wanted to make a career out of the Army. But his injury will likely end that dream.

He and his wife wanted to start a family. That will have to wait.

They also have to decide where they will live. His Rehabilitation in Houston could take from several months to two years. Her family remains in Seattle, but his family and friends are in the Houston area and are considered vital to his recovery.

That decision, too, will have to be made later.

Discussing ‘what ifs’
Before he left for Iraq, the couple discussed how his tour might affect them: What if he doesn’t come home? What if he’s wounded?

“It had to be talked about,” Heather Cannon said. “I hated talking about it, but it had to be done.”

Cannon’s mother didn’t want to delve too deeply into the topic. She lost her husband, Bob, a year ago to pancreatic cancer, just three months after the diagnosis.

Her son, she said, had always been intrigued by the military and attended Marine Military Academy in the Rio Grande Valley for junior high. She home-schooled him after that.

She and her husband supported their son when he told them he wanted to enlist in the Army. They figured the war would soon be over.

“It just rips my heart out,” Patti Cannon said. “I should be thankful he’s alive, but I’m still at the point where I’m angry this happened to him.”

Her heart sinks when she has to leave her son at the end of the day, but she has an 11-year-old daughter, Kelsey, to look after.

He asks her not to go.