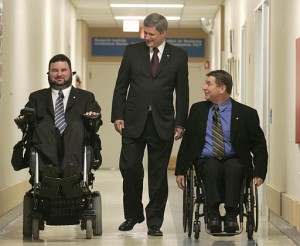 The money will go towards the Spinal Cord Injury Translational Research Network, which was established by the Rick Hansen Foundation, the prime minister said.

“This initiative will create a national network whose purpose will be innovative research discoveries into practical benefits for Canadians with spinal cord injuries,” Harper said, sharing the stage with Hansen, who is celebrating the 20th anniversary of his 40,000-kilometre Man in Motion tour.

“As the ultimate goal is to see people walking away from spinal cord injuries, the majority of the funding I’m announcing today will be used to explore ways to reduce permanent paralysis. Through this initiative, research will be conducted to determine the most effective methods of emergency and acute care as well as which subsequent rehabilitation techniques work best.”

For those already living with spinal cord injuries, investments will be made to ensure better mobility, less medical complications and greater independence, the prime minister said.

The initiative will also complete the rollout of a national registry used as a reporting and tracking tool.

“Through assembling, collecting relevant data this registry will be an indispensable tool in helping to optimize available resources so that those with spinal cord injuries are able to receive more timely treatment,” he said.

Harper made the announcement Friday at the Ottawa Hospital Rehabilitation Centre, where he was joined by Hansen.

Hansen was paralyzed from the waist down after a car crash at the age of 15.

The British Columbia native is best known for his 1985-86 Man In Motion tour, a round-the-world odyssey he took in his wheelchair to raise awareness of people with disabilities.

His tour and the foundation he subsequently created have raised millions for spinal cord research and rehabilitation programs and facilities.

The prime minister was also joined by Health Minister Tony Clement, and his parliamentary secretary Steven Fletcher, a Manitoba MP.

Fletcher, the first quadriplegic to be elected to the House of Commons, was paralyzed from the neck down in a 1996 car accident.

“There’s exciting research going on in Canada and around the world,” Fletcher said Friday before introducing the prime minister.

“This research offers hope to tens of thousands of people like me and countless individuals in the generations to come.”