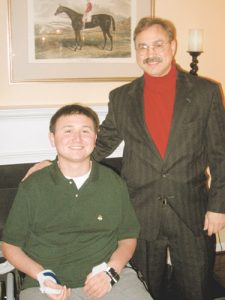 Relaunched Web site for Determined2heal offers a wealth of advice to those with spinal injuries, and the Potomac man behind it is thinking big.

Two days before the expected launch of his nonprofit’s revamped Web site Josh Basile was in his wheelchair in front of his computer, trying to pull it all together.

Like any self-taught Web designer, Basile hit a couple of snags coming down the homestretch. Basile needed to find a different way to store some of the pictures so they consumed less memory. Not all of the links that the site would provide were active yet.

“It’s like painting a picture,” Basile said. “Using the software is about building layers and speaking its language.”

Basile worked out the kinks, and on Sunday Jan. 28, he lauched the vastly upgraded Web site for determined2heal.org.

BASILE’S WEB SITE is an Extension of the nonprofit organization of the same name that he launched in July 2005, nearly a year after he was paralyzed from the neck and down in an accident at Bethany Beach, Del. The organization advocates spinal cord injury research — including stem cell research — beach safety and the dissemination of treatment and lifestyle information to those with spinal cord injuries.

Determined2Heal’s Web site has been around since the organization launched, but it was not all that Basile wanted it to be. The newly renovated version still desribes the nonprofit, but its primary service is to serve as a one-stop shop for people looking for all things spinal injury-related.

Medical information and lifestyle advice abound for those with spinal injuries. The site has links to medical and recreational equipment, from blood pressure monitors, to tank-like wheel chairs for backwoods hunting. There is advice on the basics of day-to-day living, travel advice, and relationship and sexual health advice.
“There are a thousand sites out there,” said Basile about similar sites, “and they each do one thing well. This brings together all of the information that is out there to one place.”

Peter Burns is a Walt Whitman sophomore and a friend of Basile’s who helped Basile create the original site last summer.

“Josh is a real good guy for doing this,” said Burns, who helped gather information for the Web site about conversion vans and other travel tips for those who are paralyzed. “He works on it practically non-stop; he puts in more hours a day on the Web site than I probably do on school.”

One feature that Basile is excited about is a color-coded diagram of the spine on the site’s homepage entitled ‘Click your level of Injury.’ Each of the Vertebrae are labeled and coded by color and will guide a visitor to the typical results of each degree of injury.

For example, click on the C5 vertebrae near the top of the neck and you learn that those injured in this area can typically move their arms using their shoulder and biceps muscles, a Ventilator is not needed for breathing, and that through training and the use of special equipment persons with this injury can hope to eat, drink, bathe and drive with out any assistance. Each level of injury is different and the site provides specific information for each one.

“My mind and my words are the two best tools I have,” said Basile. “Since my injury, I feel like I speak spinal cord… and my words can help people make the transition.”

THE PAST two-and-a-half years for Basile have been marked by drastic change and profound progress. While in the hospital, Basile was told he would never get off of the respirator that was keeping him alive. He went beyond getting off the respirator, and after two and a half years of intensive Physical Therapy Basile has worked his way from an electronic wheelchair that moved in response to sips and puffs on a plastic straw, to a joystick-controlled, motorized wheel chair, to this month, when he began to use a power-assist manual wheelchair around his home in River Falls.

A varsity tennis player during his freshman year at Skidmore College, Basile said he lost 50 pounds in the first three weeks after his injury. Through the therapy — four-hour sessions each day in his basement gym — Basile said he has gained all of the weight back. He does exercises on machines for his upper body, but advanced electrical equipment allows him to exercise his legs and maintain their muscle mass, said his father John Basile.
“We do it so when the science evolves to the point for him to walk again, he’ll be ready,” John Basile said.

Josh Basile resumed taking courses at Montgomery College and the University of Maryland after interning during the summer with Ben Cardin (D-Md.), then a U.S. representative who has since won a seat on the U.S. Senate.

Returning to school has presented new challenges. “It’s a totally different way of studying and learning,” said Basile. “In class I have to work so much harder because I can’t quickly right down notes.”

Basile uses scribes provided by the college, or he gets notes from friends in his classes. The effects of the difficulties and Basile’s hard work in school have yielded different results from the last time he was in school.

“I’m a straight-A student now, so that’s kind of weird,” said Basile. While Josh was a good student before, said John Basile, he has thrived academically with fewer distractions. Josh Basile said that he enjoys school more now than he did before.

Basile said he will begin taking classes at the University of Maryland next semester, with the goal of graduating in hree years or less.
“Right now I’m choosing a career and it’s not based on money, I’m going to pursue something that will make me happy,” Basile said. Right now Basile thinks he will minor in art major in business, but he isn’t sweating the specifics at this point. With the Determined2Heal Web site up and running and his organization picking up steam, Basile is already doing exactly what he wants.

“To tell you the truth,” Basile said, “I’m pretty much dedicating my life to this. You can think of it as a business, but it’s fun for me.”

Relaunched Web site for Determined2heal offers a wealth of advice to those with spinal injuries, and the Potomac man behind it is thinking big.