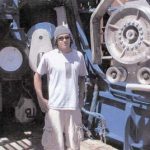 Graduate of Newport High School and former Newport resident Luis Acosta was injured in a snowboarding accident at Mount Hood Ski Bowl Dec. 8, 2006. Early that Friday morning, Acosta, who had been to the mountain several times this season, decided to make a solo trip to Mount Hood Ski Bowl to take advantage of good weather.

That night several of Acosta’s friends from all over the state joined him and his roommates in Portland to make an event of opening day at Mount Hood Meadows when Highway 35 opened the following morning.

Recounting the day for his friends that evening, Acosta said he was “flying down the mountain near the bottom of the run, when he caught his heel-side-edge sending him cartwheeling down the hill.” Once Acosta had settled sitting, a passing skier stopped to offer assistance. Acosta told his friends, out of shock, pain and a little embarrassment, he told the skier he was fine.

However, shortly thereafter, Acosta began to think he might have broken some ribs and was struggling to breathe. He also experienced back pain, which he credited to burns and bruises where his jacket had slipped up and bared skin to the snow and ice. The anonymous skier stopped to look back a little farther down the mountain, and saw Acosta vomiting. Soon after ski patrol arrived on the scene; alerted by the anonymous skier. Acosta again refused help. He walked the remainder of the way down the mountain to his truck, and drove himself home to Portland.

Upon arriving home around 3 p.m., friends recalled Acosta was “in a good mood, joking and laughing about the gnarly fall he had taken on the mountain and proudly showing off his torn-up lower back.” He was adamant, “though his ribs might be broken and his back was hurting, it was not going to keep him from his trip back up the mountain the next day.”

That evening several of Acosta’s friends arrived and they all cooked dinner together. After dinner Acosta went out on the town with several others, finding their way back home around 1 a.m. Acosta had offered his bed to friends and was preparing to sleep on the couch when another friend arrived and several others stirred. One friend made a casual remark to Acosta as he stepped into the kitchen and was curious when he didn’t get a response. The friend again addressed Acosta, and received no response.

At about the same time a couple of the friends returned to the living room and discovered Acosta was not moving or responding, one of the friends, Jeremy Holt, moved Acosta to the floor and found he wasn’t breathing. Jeremy instructed his younger brother, Riley, to call 9-1-1, and to wake Acosta’s roommate, Spencer Mason. Jeremy began to administer CPR, a mandatory skill he learned as a commercial fisherman. Riley remained on the phone with a 9-1-1 operator. Mason said he “did his best to keep Luis alert, with his eyes open and minimally responding to questions by blinking.”

Paramedics arrived, and eventually suspected Acosta’s snowboarding accident earlier that day to be the cause of his condition. Once stabilized and strapped to a backboard, Acosta was transported by ambulance, to the Oregon Health and Science University (OHSU) emergency room at approximately 2 a.m.

Throughout the night multiple X-rays and various radiological scans and procedures were administered; it was determined Acosta had fractured two of his Vertebrae, and dislocated his spine between the second and third vertebrae. Two specialists were called in.

After 3 a.m. the friends were alerted to the severity of Acosta’s condition, and it was suggested Acosta’s closest relatives make the trip immediately. Mason had been in contact with one of Luis’ elder brothers, Juan, who lives in Newport, and hearing this Juan drove straight to Portland.

That morning, Saturday, Dec. 9, Acosta underwent surgery to stabilize his spine with two metal plates. The procedure lasted more than 10 hours, during which time surgeons re-aligned the upper vertebrae where they had collapsed after the dislocation, while being careful of the spinal cord which was misshapen according to the disrupted line of the spine. Thereafter doctors attempted to pass a current through the injured portion of the spinal cord; but were unsuccessful after multiple attempts.

While the surgery progressed, many friends and family arrived at the hospital. At approximately 4 p.m. those gathered were informed Acosta had sustained a “critical spinal cord injury.” Doctors suspect the swelling around the injury held the spine inline – despite ligaments having been virtually destroyed – preventing for some time the impending paralysis.

Acosta lost function in all voluntary muscles below his shoulders that day; including his diaphragm, which has led to his continual reliance upon a respirator and a subsequent short battle with pneumonia. Also, one of his lungs has collapsed several times. He is currently reliant on a feeding tube and underwent a tracheotomy to ease his breathing and communication. Acosta has been graduated from the initial respirator to a mobile unit, which doctors say is an indication he could be moved from the intensive care unit soon.

Communication is still limited to reading Acosta’s lips, Mason said, though friends and family have become seasoned in this skill, which has eased initial frustration for both Acosta and his visitors. It is hoped Acosta will be able to regain his voice, with time; as irritation from tubes in his throat subsides, and he learns better how to manipulate his breathing with his respirator.

Acosta was fortunate only one of two critical blood vessels that transport oxygen to the brain through the spinal cord was damaged. Doctors explained, “Like most fluid systems, the blood takes the path of least resistance; still able to transport sufficient oxygen to his brain, his mind is completely undamaged.” Mason said, “This has been a stronghold for hope in all who know him.”

Acosta’s friends and family have been continually supportive. Mason said, “Luis’ girlfriend, Hilary Hockema, has been especially determined to stay by his side, refusing to leave the hospital for days … she has been there more than anyone else.” Acosta’s brothers live in Eugene and Newport and maintain full-time jobs. Acosta’s parents reside in Mexico, and arrangements are being made for them to visit; though Mason said, “Bureaucratic steps continually slow the process.”

On Jan. 18 Acosta was moved from the ICU to the trauma center at OHSU. Friends report he is showing improved strength and mobility in his neck; and said he is now able to shrug his shoulders. It is possible with time and Rehabilitation Acosta will continue to regain mobility throughout his body.

Friends say Acosta’s conscientious nature and positive attitude have not faltered. Just a day after the accident, Acosta “was throwing people on their heals by telling them to ‘take care,’ or ‘drive safe’ and so on,” said Mason. “As one friend was leaving Luis’ room a couple of weeks ago, and mentioned he would be back soon to visit, Luis told him to call first, because he was going to try to be home by the next week.” Nor have Acosta’s adventurous spirit or sense of humor been dampened. Mason recalled, “Some of Luis’ first words were not, ‘Can I walk again?’ but rather, ‘Can I go snowboarding?’ and when told short term prospects were nil, Luis asked ‘When then?'”

Even joking with Hockema, Mason said, “About attaching a couple of boards to the bottom of his hospital bed, or devising some sort of sled, to get back in the powder.”

In November 2005 Acosta lost his right hand while working in Alaskan waters on the commercial fishing boat the Trailblazer. Unable to continue work as a commercial fisherman, he has been uninsured ever since.

He recently moved from Newport to Portland, excited to begin school this winter term at Portland Community College. He planned to study linguistics.

The medical expenses associated with care following the Dec. 8 snowboarding accident have long since expanded beyond the means of Acosta, his friends and family. Donations may be made to the Luis A. Acosta Medical Fund (004542120790) at any branch of Bank of America. For further information contact Spencer Mason at masons@pdx.edu.

Facebook
Twitter
Email
Mix
Digg
Previous articleWhat’s the difference between a paraplegic and a quadriplegic?
Next articleBIKER BACK HOME SIX MONTHS AFTER CRASH

cotton to the core Jim MacLaren