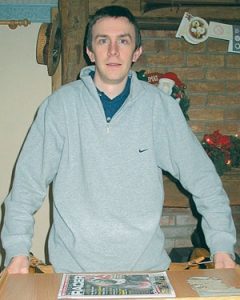 Biker Steve Booker has been discharged from Sheffield Hospital spinal unit six months after he broke his neck in a Superstocks qualifying accident at Snetterton in Norfolk.

Steve Booker is making a steady recovery at home six month after a serious accident.

Steve returned home to Branston in time to spend Christmas with his family and is making steady progress.

The damage to his spinal cord is around the C5/C6 Vertebrae and is termed incomplete which means he has some movement and feeling below the injury level with hopefully more to return.

He said: “It’s a bit like being three years old again, learning how to write again and eat properly.

“But as every week passes, everyday tasks get a bit easier to do and my body gets a little bit stronger. My legs have improved a bit but my hands are pretty much the same, with hardly any grip strength.

“The hardest part is planning the future because I don’t know how much movement will return and neither do the specialists, but I just have to do loads of physio, keep positive and time will tell.

“I have a standing frame that I get helped up into a few times a day which is good for my joints and circulation, plus it makes a nice change to be stood upright.

“I soon hope to be able to drive myself about and get to as many British Superbike meetings as possible as I’m still completely hooked on bikes and hopefully I’ll be fit enough to be of use to someone in the paddock.”

Steve had a driving assessment just before leaving hospital.
He said: “The car we used was an automatic Corsa with a handle on the right side of the steering wheel which you push to brake and pull back to accelerate.

“On my left hand I wore a special glove with a tube stitched on to the palm which slots over a peg on the steering wheel.

“Everything went fine but I soon discovered I needed a full harness to stop me slipping sideways every time we went round a corner because my core strength is still weak. Also I found that 30mph has gone from being painfully slow to just about right.”

Steve is hoping to get a hand cycle to get out and about on and to help get some strength back.

He said: “It’s basically a trike which you almost lay down in and pedal with your hands. They’re great for building upper body strength and having fun at the same time.”

Steve has been helping out at Len Manchester Motorcycles, keeping their website up to date. He has also been researching spinal cord injuries on the internet.

“I found this rehab centre in America called Project Walk and it sounds perfect for my goals. They don’t believe in planning your life around the wheelchair and neither do I, so I’m hoping it’s possible to go over there sometime.”

Although Steve is unable to ride bikes, he has lost none of his enthusiasm for the sport.

He said: “I’ve been catching up by watching all the races on video that I missed while in hospital. It’s the first winter in ages that I haven’t been getting everything in place for the season ahead and I really miss it. I just hope I’m able
to get back on a bike one day.”