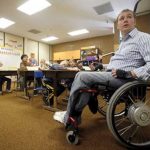 LAYTON — Kirk Green makes his way through the halls of E.G. King Elementary School in Layton, pushing with leather-gloved hands the large wheels that make his wheelchair move forward.

Many of the children he passes greet him with a large smile and a shout of “Hola” as their Spanish teacher rolls by.

The 23-year-old Green remains hopeful one day he will be able to walk down the halls of the school.

The former west Layton farm boy, who once loved to get his hands dirty, is pinning some of that hope on a trip to China. Green, his newlywed wife, Jessi, father, Jon, and grandfather Kelly Green, are traveling thousands of miles for a chance at his recovery.

Green, a quadriplegic, will undergo a stem cell transplant, the cells surgically inserted into his spinal cord.

On Dec. 18, 2004, Green broke two Vertebrae in his neck in a snowmobile accident in the Kamas woodlands.

Green said he came off a jump awkwardly, tumbling head first over the front of his snowmobile. The machine landed on top of him, breaking the vertebrae and paralyzing him from the chest down.

Three months later, Green was released from the University of Utah Medical Center and LDS Hospital in Salt Lake City, hoping that through Physical Therapy and faith he could regain feeling in his arms, legs and the trunk of his body.

“Life just can’t stop and end, you have got to press on,” said Green, who was injured five months after returning from a mission in Mexico for The Church of Jesus Christ of Latter-day Saints.

After much study and talking to a Florida man who treated his paralysis with a similar stem cell transplant, Green opted to travel halfway around the world in search of a miracle cure.

Sometime this week, Green will undergo the surgery in which stem cells from newborns’ discarded umbilical cords will be used.

Following the surgery, Green will receive an IV consisting of blood stem cell fluid, every five to seven days. In addition, he will have to go through six hours a day of rigorous physical therapy that will include acupuncture.

Green said he sees nothing controversial or immoral in his decision to move forward with the stem cell surgery. It has been available in China since 2001 and does not involve the controversial use of stem cells from an embryo.

The worst-case scenario, Green said, is that the stem cell transplant does not have any effect. But on the up side, he mused, at least he will get to experience a trip to China.

The family, who wished not to make the cost of the surgery and trip available, is paying the entire expense.

University of Utah physical therapy graduate students, as part of a two-year study, are also monitoring Green’s treatment and progress while he is in China.

The students, who performed a base line study on Green’s mobility prior to his departure, have asked Green to provide them, through recordings, a narrative of his experience in China. The student group has also asked Green’s wife, Jessi, to make entries in a journal for their use upon their return from China.

“You never want to let go of hope, because you never know what they are going to come out with,” Green said, flashing his contagious smile.

So Green is hoping for a best-case scenario of being able to walk again some day. And if not, at least obtain a lesser goal of being able to increase the use of his arms, shoulders, wrists and body to where he can dress himself and lift himself from his wheelchair to his bed.

Green said he has already taught himself how to drive in a truck modified just for him.

“It was kind of like turning 16 years old again,” he joked of getting behind the wheel for the first time.

He is also pursuing a degree in business from the University of Phoenix.

“(Kirk) has had a good attitude through the whole thing,” said his mother, Carri Green, who also teaches at E.G. King Elementary. She said she is nervous for her son and what his adventure to China will bring.

Prior to the trip, Black said, Green has shown “phenomenal progress” with his physical therapy at the South Jordan clinic where she works.

Green has increased his strength in his right extremities. He has progressed to the point where he can sit up independently and is beginning to develop the body movement needed to transfer from a wheelchair to a bed or into his vehicle, Black said.

“His emotional and physiological status has changed immensely,” she said of Green’s early days at the clinic when family members had to push his wheelchair for him.

At one time Green struggled with Depression, Black said. She said he has taken that on and she has seen a change in his attitude as a result of his recent marriage.

Through the love and support (Kirk) Green has received from his wife Jessi, he has made progress in an effort to try and provide for their family, said Ginger Coulam, Jessi’s mother.

“My wife (Jessi) motivates the heck out of me,” Green said.

“Anybody that gets a spinal cord injury thinks they will walk again,” Green said, speaking of his own hope that his China trip will let him reach his ultimate goal of being able to walk again.

And should improvements from the stem cell surgery fall short of that goal?

“Just a little improvement is worth it,” Green said.