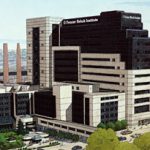 Jen Boisvert, clad in black exercise clothes, went through some stretches in a sixth-floor gym at Frazier Rehab Institute’s downtown tower, part of a program to help her regain leg movement after a spinal-cord injury.

Not so long ago, the gym — and the sixth floor itself — weren’t there. They were added in a $93 million expansion that is just being completed.

The 4½-year project tripled the size of Frazier’s five-story building on Abraham Flexner Way while adding enhanced Rehabilitation facilities. The project’s last element, a covered drive between Flexner and Chestnut Street for dropping off patients, will be completed this week.

Around Boisvert, therapists put accident victims and neurological patients through regimens on a variety of equipment in the airy outpatient gym, brightened by a room-length window looking out over Louisville.

She must, because Boisvert, of New Hampshire, came more than 1,000 miles to take part in Frazier’s Locomotor program, in which therapists assist movements by paralyzed patients to stimulate their muscles and nerves. That helps neurons make new connections so patients can regain some walking ability.

Frazier is the lead U.S. center of the Christopher Reeve Foundation NeuroRecovery Network, which uses Locomotor training. The network’s director, Susan Harkema, pioneered the technique at UCLA before coming to Frazier and the University of Louisville last year.

The program’s move to Frazier and the added space and facilities from the expansion have combined to bring in more patients, especially from far away.

The 15-story tower, called Frazier Rehab and Neuroscience Center, is the tallest building in the downtown medical center. It has nearly 450,000 square feet, though Frazier won’t occupy it all. The second through fifth floors will go to Jewish Hospital, Frazier’s sister institution next door, for future uses.

The 135-bed facility has recently had patients from Montana, Florida and other distant places, she said.

A California patient’s family visited leading rehab centers in Atlanta and Texas before coming to Frazier, and a Chicago man came there recently after doing an Internet search and learning of Frazier’s new therapy pools.

Boisvert, a legal assistant who was injured in a car accident in 2001, has been treated at Frazier since late May. She moved to Louisville to be near the facility.

As part of her Locomotor routine, a motorized overhead lift holds her over a treadmill, supporting her body’s weight while she walks.

“They didn’t have anything like this up near New Hampshire,” she said.

Boisvert chose Frazier after hearing Harkema speak in Boston. She e-mailed Harkema asking where she could get Locomotor treatment, and the professor told her of Frazier’s program. (Boston Medical Center is one of five facilities in the NeuroRecovery Network, but its Locomotor program wasn’t operating then, Boisvert said.)

Boisvert never saw the old Frazier building, but patients and therapists familiar with it said the new one far outstrips it.

“This is way better. When I saw it, I was in awe. I was like, ‘Wow,’ ” said Tanya Dennis of Louisville. Her daughter, Briaona Watts, 13, has been treated at both the old and new facility.

Briaona, a former brain-cancer patient, returned to Frazier in September after a bout of encephalitis hurt her Motor skills, Dennis said.

On a recent visit, she played a card game with a therapist in the large colorful gym on the eighth floor, where Frazier’s pediatric program is housed.

Besides space, Frazier has added equipment and facilities that benefit her daughter, Dennis said.

For example, there’s the Snoezelen room, with its large, multicolored tubes of moving bubbles, a board of flashing lights, and massive beanbag chairs with embedded music speakers. The equipment can be set to calm or stimulate young patients or test their coordination or sensory Impairment.

Patient rooms are more than twice as large as in the old facility, and include large plasma-screen monitors on the wall — for watching television or reviewing treatment plans or X-rays.

The first floor will have a retail area, including a Republic Bank branch and possibly a pharmacy, gift shop and coffee shop.

The new building was constructed above and around the old one, in a project that used enough steel to make 1,500 cars, enough glass to cover two football fields and enough bricks to cover 82 miles if laid end to end, officials said.

The expansion allows Frazier to devote an entire floor to each of several categories of patients — for example, neurological cases on the seventh floor and orthopedic patients on the ninth. Each floor has equipment and facilities for that type of patient.

In the old Frazier, a patient was wheeled from his or her room on one floor to a gymnasium or an occupational- or speech-therapy area in the basement or elsewhere. The staff included transporters to do that.

“Now that (patients and their facilities) are on the same floor, it’s a lot easier,” said Mark Najjar, a Physical Therapist on the eighth floor, which has pediatric patients and also some adults. “We can just go to their room and pick them up.”

The new arrangement makes it easier for doctors to find their patients and their charts. It also allows for easier collaboration among different types of clinicians treating a patient.

“We can communicate a lot easier with the doctors because we see them on the floors, looking at the charts,” Najjar said. And “we get to talk to the nurses all the time.”

He also likes the vibrant blue and green colors of the nautical-themed eighth floor.

“It just livens you up,” Najjar said. “I think it’s good not just for the kids, but for the adults too.”