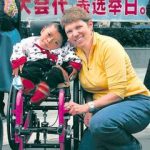 When Physical Therapist Colleen Sullivan Moses and her group drove up to a village in Tibet, they often found an entourage waiting to greet them – the mayor, the head of the local Red Cross and long lines with hundreds of sick and disabled residents. The American volunteers unloeded wheelchairs from the back of a pickup truck, opened boxes of supplies and set up an outdoor clinic, where they examined children who were lying on the ground, despite snow and sleet.

Moses, 50, who lives in Bow and owns Pediatric Physical Therapy Clinic in Concord, was part of a group of five physical therapists, an oncologist and an interpreter from across the United States who spent three weeks in October in northwest Tibet distributing wheelchairs and other equipment to disabled residents.

“After being in Tibet, you recognize that we, who live with such privilege and abundance, have a responsibility to provide for people who don’t have that privilege,” Moses said.

The trip was organized by Eunice Shen of Los Angeles, who has made five previous trips to Tibet to help disabled residents and who recently set up the nonprofit Rainwater Foundation to help with her work. The participants funded the trip themselves with the help of private donations and services provided by the Tibetan government.

Their first stop was in western China, where they bought 70 wheelchairs and spent a week at sites sponsored by the government, teaching classes for physical therapists and physicians on managing children with disabilities. Because China does not make specialty wheelchairs for children, they also brought six chairs in from the United States, the maximum number allowed by luggage regulations.

The group spoke about dealing with Disability at one conference of more than 200 parents and professionals, but they spent most of their time with patients. They made three stops in small villages, distributing wheelchairs and giving medical attention. They brought with them medicines, braces and special seats for wheelchairs. Residents waited patiently in line for hours until the team could see them.

“Even though there was a language barrier, they were so excited and happy to be in our presence,” Moses said. The Americans and Tibetans communicated using eye gazes, signs, gestures and touch. Moses tried to teach parents how to stretch their children’s muscles by moving the parents’ hands and gesturing.

Many children in the villages suffered from cerebral palsy or had amputated legs. The elderly had severe arthritis. They lived in tents and stone huts and were often unable to farm or manage the yak – necessities for survival. Often, reaching a hospital meant a two-day journey over dirt roads.

One girl, Moses recalled, was 12 years old but looked like a little child. She had a rare disease that made her bones fragile, and her legs zigzagged because the bones had fractured so many times and were never set properly. The team gave the girl a hot pink wheelchair and showed her how to push herself.

“She was able to move herself for the first time and she was beaming,” Moses said. “She sang a Tibetan folk song to me and I just cried.”

Moses said that despite the hardships, the Tibetans seemed happy with their lot. “People appeared so content with the lives they had. They had not recognized they didn’t have so many of the things we have here,” she said.

At one “wealthy” home they visited, that of a man paralyzed with a spinal cord injury, the bottom floor was taken up by chickens and yaks. The six to eight family members lived on the second floor, which was about the size of a large American living room and kitchen. On the third floor, they stored grain for the winter. Moses said the family went out of their way to prepare a meal for the guests, with apples, nuts, candies and yak milk tea.

“They were willing to share what they had. They were so gracious and kind,” she said.

The trip was Moses’s first time in a developing country, although she has wanted to travel since she was a young girl. She came up with the idea of distributing equipment to disabled people after working as a pediatric physical therapy consultant for the state and discovering how much surplus exists in a state-run bank of recycled equipment.

“We have so much abundance that hasn’t been tapped into,” she said.

But distributing the equipment in third-world countries turned out to be a financial and logistical nightmare, so she gave up on that idea and joined the trip to Tibet.

The hardest part of the trip for Moses was the feeling of not being able to do enough.

“To know what’s possible but not be able to provide the information and resources to people there,” she said. “To go for a day, do what we can, then pick up and leave. . . . I’d love to have spent three hours with one family.”