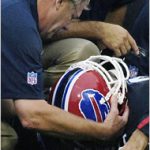 BUFFALO — Two days after he was paralyzed during a game, and one day after doctors described his condition as potentially life-threatening, Buffalo Bills tight end Kevin Everett was moving his arms and legs Tuesday.

Another doctor, who has consulted with Cappuccino, said Tuesday that Everett could eventually walk out of the hospital.

“Kevin Everett is moving his arms and legs, his legs stronger than his arms,” said the consulting doctor, the neurosurgeon Barth Green. “He’s moving them both to a point, to a degree that he will end up walking. He will walk out of the hospital.”

On Monday afternoon, Cappuccino, an orthopedic spinal surgeon, described Everett’s chances of a complete recovery as “unlikely” and between 5 and 10 percent.

The next day, however, Green said he had spoken to Cappuccino and described him as “elated.”

“I think he’s walking on clouds right now,” Green said. “Any physician would be.

“What he told you yesterday is the case 99 percent of the time. That is that people who are paralyzed stay paralyzed.”

On Monday, team doctors said Everett, a 25-year-old backup tight end, was paralyzed from the shoulders down and in life-threatening condition after a collision Sunday during a 15-14 loss to the Denver Broncos.

Everett was injured on the second-half kickoff while attempting what appeared to be a routine tackle of Domenik Hixon. But after striking his helmet on Hixon’s shoulder pads, Everett immediately collapsed. He lay motionless for about 15 minutes.

The Bills’ team physician, Dr. John Marzo, described Everett as conscious and alert on the field but unable to move his extremities. Everett was immobilized using a back board and taken by ambulance to Millard Fillmore Gates Hospital in Buffalo.

During the ride, Cappuccino began lowering Everett’s body temperature to protect his brain, spinal cord and other organs.

At the hospital, Cappuccino operated for four hours Sunday night to repair damage to Everett’s third and fourth Cervical Vertebrae and spinal cord. Cappuccino said that Everett suffered direct compression of his spinal cord between the C-3 and C-4 vertebrae, but that the spinal cord was not snapped.

Reached by phone Tuesday night, Cappuccino said he was not permitted by the Bills to comment further.

Green is the chairman of neurosurgery at the University of Miami. He is also the president of The Miami Project to Cure Paralysis, a foundation he started with the N.F.L. Hall of Fame linebacker Nick Buoniconti, after Buoniconti’s son Marc sustained a spinal cord injury in 1985 while playing football for The Citadel.

Green is also friends with the Bills’ owner, Ralph Wilson, who has helped support The Miami Project.

Green said the fact that Cappuccino lowered Everett’s temperature to 92 degrees immediately after the injury made a difference in his recovery.

The procedure is called moderate Hypothermia.

“It’s like a bruising of an arm, an ice pack will help,” Green said. “The vascular system was the ice pack for Everett’s spinal cord.”

Dr. Joseph Torg, professor of orthopedics at Temple University, said Tuesday that it was difficult to make generalizations with spinal cord injuries.

“You want to see improvement in the first 24 to 72 hours if the individual will have a normal recovery,” Torg said. “Every case is unique. You can’t close any doors any way this early.

“The fact he has some spinal cord function is extremely optimistic.”

The Bills did not practice Tuesday, and players were unavailable for comment.

“It’s a dangerous game, and yesterday we saw that and it came right to us,” Bills Coach Dick Jauron said Monday. “It was right in front of us. It was one of our teammates down on the field.”

A monkey’s mind over matter