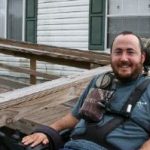 Krolikowski, 31, has been paralyzed from the shoulders down since a bull-riding accident at a Jacksonville bar in 2003. Now he’s hoping a pioneering clinic in Russia will help him regain the use of more of his body.

Krolikowski is an avid outdoorsman who loves hunting, fishing and boating, but the fateful ride on a bull at Eight Seconds on Sept. 13, 2003, left him unable to do the things he loves. Bull riding wasn’t new to him, he said. The Middleburg native had been riding them competitively since he was 13, he said.

“I fell wrong in the arena that night and compressed my spinal cord by 50 percent,” Krolikowski said.

The fall also fractured one of his vertebra, he said.

At the time of the accident, Krolikowski was in the U.S. Navy, stationed at Kings Bay Naval Submarine Base in St. Marys, Ga. After the accident he was taken to a Veterans Affairs hospital in Tampa, his paralysis nearly total. He needed a Ventilator to breathe.

“They told me I would never get off the ventilator,” he said. “The compression is just as bad as severing the spinal cord. It left me paralyzed. It took 41/2 months, but now I’m considered one of their miracle children.”

Jacksonville’s Eight Seconds bar is now gone, but after Krolikowski’s injury, the owners held a bull-riding benefit in his name and raised $3,500. He said he used most of the money so his wife, Jenni, and his daughters, Chelsea, 11, and Constance, 6, could visit him in the hospital.

In subsequent therapy, he was able to straighten his arms, but his progress stalled there. And living with his injury has not always been easy. He’s in a spinal injury support group and is being treated for Depression, he said.

“I’ve got problems with my temper because I’m unable to do anything,” Krolikowski said.

Now he says he’s determined to pursue the promise of more progress offered by stem cell therapy and willing to travel halfway around the world to get it.

NeuroVita, a Moscow-based clinic, is a pioneer in stem cell treatments for spinal cord injuries, but does not use stem cells harvested from embryos, a process that’s controversial in the United States. NeuroVita claims on its Web site that the clinic’s stem cells treatment takes cells only from the patient.

Krolikowski said he and his wife discovered the Russian clinic on the Internet as they did research on treatment options. NeuroVita’s doctors gave him an 80 percent chance of regaining the use of his arms and hands after they reviewed laboratory results from his American doctors, he said.

The hope it’s given Krolikowski has made him determined to get the money to go.

“I need at least $30,000. That includes the surgery and the Rehabilitation and therapy afterward. It will take about $5,000 to pay to get me over there and back.”

He said he’ll need two people to help get him on and off the plane and to help him get through the long plane flight. His said he expects that his friend Bruce Tubman and his brother Carl Krolikowski will come along to assist him.

Krolikowski said it’s not a question of whether he will go to Russia, but when.

To help send him there, friends are sponsoring a poker run today in Boulogne that they hope will attract around 300 riders, said organizer Gene Cobb who first met Krolikowski in a Hilliard grocery store following his accident.

“He was pulling around his little ones on his wheelchair,” Cobb said.

Now Cobb is hoping today’s fundraiser will help Krolikowski in his quest for recovery.

“There are people who actually walk afterward,” Cobb said. “He stands more of a chance of using his arms than using his legs. He told me he wants to to use his arms so he can give the ‘thumbs up’ to boats going by on the [St. Marys] river.”

Krolikowski frequents Scotts Landing on the St. Marys River. He hopes to someday swim in the river again, using his own arms.

“I got to float this past summer,” Krolikowski said. “It was awesome. The water was chilly, but it was nice to be in it again.”