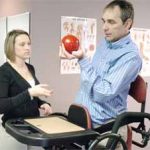 SIKESTON — Terry Cole of Sikeston doesn’t know what the future holds, but he and his therapists know he’s ready to undergo stem cell treatment at the end of the month in China.

Cole, who’s been paralyzed for nearly 32 years, and his wife, Cindy, will leave Oct. 29 to spend a minimum of 30 days in a city near Hong Kong. There, he will be the subject of a study involving one of two procedures involving umbilical cord blood stem cells, which are harvested from umbilical cord blood after a baby is born.

Over the past six months, Cole has participated in countless hours of daily therapy sessions at Ozark Physical Therapy and Fitness in Sikeston to prepare for the treatment. The purpose of the therapy is to help build Cole’s aerobic capacity and endurance to facilitate recovery following his surgery, his therapists said.

Since May 22 Cole has gained more trunk stability and is able to sit up on his own without using his hands. He’s built hip and knee muscles. He can ride a special bike by himself for an hour, and he can stand in a standing frame for over 45 minutes. All of these are things Cole couldn’t do before.

In addition to therapy, Cole quit smoking and changed his diet so he could have more energy.

“I’m ready,” Cole said about his upcoming trip. “I have a little anxiety — maybe because of the unknown.”

But Cole said he’s received a lot of support from family and friends, which means a lot.

When he arrives in China, Cole will be treated by one of two methods. One is to take five injections of about 10 million stem cells each over the course of a month into the spinal cord fluid.

Cole won’t know which treatment he will receive until he arrives in China. Either method will involve Rehabilitation for six hours a day, six days a week. It will consist of a mix of physical therapy, Occupational Therapy, speech therapy, acupuncture, manipulation, activities of daily life education and Chinese massage.

“I’ve been talking to a guy about once a week in China, and they’re all set up and ready and waiting for me,” Cole said.

Everyone who has received blood cord stem cell treatment has seen some type of improvement, Cole said. He expects to see improvement after only a couple weeks of treatment, and further gains can occur up to two years after injection.

Upon returning to the United States, Cole will resume therapy at Ozark. Cole said he couldn’t have accomplished his physical feats without his therapists.

“They have really worked hard on me. They’ve kind of cheered me on and have been here every time I need them,” Cole said.

“We’re not just therapists and patients. We’re all good friends, and I enjoy coming to therapy here,” Cole said.

The feeling is mutual.

“He’s extremely motivated,” Cole’s Physical Therapist Tracy Davied of Ozark Therapy said. “He’s going to do the best the stem cell will allow his body to do.”

Cole’s Occupational Therapist Brooke Reed of Ozark Therapy said she would like to see Cole improve his muscle movement and strength and to be able to stand on his own.

“I think our hope is if he just gets more movement in his legs, we’ll be happy,” Reed said. “As long as Terry is happy with the outcome, then that’s all we could hope for.”

Cole and his therapists are keeping their hopes realistic, but they also know anything’s possible.

“It’s whatever the Lord decides, honestly,” Cole said. “I don’t want to go over there with false hopes. I’m just going over there with the attitude, ‘whatever I get back, I get back.’ This is something I’ve just got to try.”

Patients With Spinal Cord Injuries Should Be Assessed for Sleep Apnea