In search of the perfect stem cell medium at Davis

Cash, 25, works way down the stem cell food chain, creating the food that stem cells will want to eat. Working in the old-style chemistry lab of Timothy Patten, Cash just received a two-year UC grant, at $50,000 per year, to mix up a hydro gel that will work as a starter, as if stem cells were sourdough. Given that she’s just in her second year of graduate school in chemistry, that’s a damn good summer job. A damn good winter job, too, because it gets her out of having to work as a teaching assistant to earn her keep.

“It’s really a crazy series of events that happened for me,” says Cash, who wasn’t cut out for chemistry. Her parents never went to college. She grew up the daughter of an oil wildcatter in the farm country of Woodland, Yolo County. A scholarship got her to the tiny University of La Verne in Southern California, where she was pre-med until a professor told her she had too much talent in chemistry to waste it on biology.

She tried to avoid graduate school but two years working for Johnson & Johnson in a quality-control lab in Vacaville made academics more appealing. The full scholarship also helped. 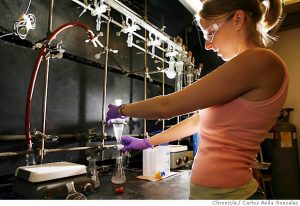 The stem cell research grant is one of 11 given to graduate students systemwide to nurture biotech talent. To win it, Cash brought a presentation to San Francisco, where 20 finalists competed before a panel of UC professors. It was like a science fair. Her adviser, Patten, who came up with the tissue-engineering concept, was allowed to introduce Cash and then had to sit down and shut up.

Her PowerPoint grabber was a slide reading “Nerve Tissue Regeneration. Spinal Cord Injury. Parkinson’s Disease. Dopamine Deficiency.” Those are the chronic diseases she’s set out to fight. “Someone has a spinal cord injury, those nerve cells can’t grow back. Parkinson’s works in a similar way,” was her lure. Her pitch was, “To make a synthetic material that will address the problems that are making these cells die.”

Attempts to directly transplant nerve cells into the brain have a low success rate, with most cells dying in the first week, she explains. Every tissue engineer is trying to solve this, by supplying mechanical support to keep them stable enough to start growing.

Other researchers have developed a Jell-O-like mix of polymers, or long molecules, that surround the stem cells. The gel degrades over time, freeing up the stem cells to multiply. The weakness is in the timing. Often the gel degrades before the cells are strong enough to survive on their own. What Cash wants to design is a gel that doesn’t have to degrade in order for the stem cells to multiply. In addition, her gel will be porous, so cells can connect to each other, in order to form tissue within the gel.

“Our molecule design is the novel idea,” says Cash, who has in mind “a spider-webby network that the cells can fit in.”

For the end product, stem cells will be pre-mixed into it, then the mixture injected into the brain or spinal cord. The gel will break apart organically and not have to be surgically removed.

The ground floor for this ambitious program is a ground-floor lab in the Chem Annex Building. The door is kept locked, but otherwise it’s a casual affair. When it’s hot out, which is all of the summer and most of the fall, Cash doesn’t even wear a white lab coat.

“It doesn’t look too professional,” she admits, “but we’re grad students.”

On a day that bicycle tires were sticking to the pavement, Cash was working on a laboratory tan while watching a liquid spin round and round in a flask. Her station, called a hood, is about the size of a bar top, and she can talk the talk like a barkeep.

“It’s amazing that I have a project that people can relate to,” she says. “I can tell them I might have something to do with helping people with Parkinson’s disease or with spinal cord injures some day.”

She gets so excited by it, that when she can’t find anyone else to listen she calls her mother in Woodland.

“She has no idea what I’m talking about, but she still listens,” Cash says. “I didn’t go to medical school like I thought I would, but I’m in a different level of helping medicine.”

The project is a collaboration between Patten and Kristy Anseth at the University of Colorado. The Davis lab makes the gel. The Boulder lab has the stem cells. Once Cash has the recipe the way she wants it, probably next month, she will fly it to Boulder to test-feed it to the stem cells. She’ll be there off and on for three to four months a year.

“We’ll come back, we’ll modify it,” she says. “We’ll make it a really optimal material.”

If it works, eventually it will be introduced into human subjects, which may bring it all the way around to those as yet unbuilt stem-cell research facilities in Sacramento. By then the new stem cell program directors, lured away from the Washington University School of Medicine in St. Louis, may have heard of Jennifer Cash, chemist.

“I’m just a researcher,” she says. “Things are going to move forward and I’m lucky to be on the forefront of it.”

Aday at a time: After tragic accident, Aday making strides in...