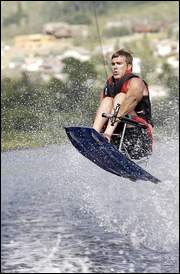 STEAMBOAT SPRINGS (AP) — Two years ago, Vijay Viswanathan severed his spinal cord while rappelling during a rock-climb on the Front Range. He has used a wheelchair ever since.

And although he has lost use of his legs, Viswanathan has not lost his taste for excitement. Viswanathan spent a recent Saturday and Sunday at Bald Eagle Lake in Steamboat Springs practicing wakeboarding and water skiing with 11 other participants with disabilities. It was part of a weekend event attended by people from as far away as Houston.

“I think the hardest part is getting up,” said Viswanathan, a 21-year-old from Boulder. “It’s all about keeping your balance.”

Although that’s a common sentiment from anyone learning a new water sport, the learning curve Viswanathan faced is unusually steep. He cannot use his abdominal muscles, which means he “has to find ways to compensate” for a decreased ability to balance.

But that didn’t stop him from cruising around the lake behind a boat, wakeboarding in a chair, or “cage,” with thick armrests. The chair was attached to the top of the wakeboard.

The cage let Viswanathan try a sport that, as recently as a few years ago, people with disabilities had virtually no chance of attempting.

\“There’s not a lot of people (with disabilities) wakeboarding,” said Craig Kennedy, a Steamboat consultant. “These guys are kind of pioneers.”

They also are daredevils. Sitting in the sun or beneath a shaded canopy on the lake’s shore as participants in the event dipped into a cooler of beverages and a table full of food, the atmosphere felt like an X Games locker room. Muscled upper bodies, wet suits, quick jokes and designer sunglasses were everywhere.

So were the stories.

Ten years ago, Kennedy broke his back on the Vertigo ski trail at the Steamboat Ski Area. The accident happened when his feet “went right out from under me,” Kennedy said. Every year since 2001, he has skied the run on a mono-ski on the March anniversary of the accident.

“It took me five seasons to get good enough to ski it again,” Kennedy said recently.
In 2003, he founded Access Anything with his fiance, Andrea Jehn. Access Anything works to spread awareness of adaptive recreational opportunities.

Kennedy ran the weekend event with Matt Feeney of Evergreen. Feeney is program director for Adaptive Adventures, a nonprofit organization with similar goals to Access Anything. Feeney’s spinal cord injury was the result of a cliff-diving accident at Lake Powell in 1988.

Kennedy said local landowner Ed MacArthur, owner of Native Excavating, donated use of the lake for the weekend.

Participants found time for fun off the lake as well as on it.

Casey Owens is a 24-year-old Marine who lost his entire right leg and his left leg below the knee when his vehicle drove over a land mine two years ago in Iraq.

After Owens wheeled his chair into a portable outhouse on a recent Sunday, a friend ran up and put a heavy metal trash can in front of the door.

“Put a couple skis on it and drag it into the water,” Feeney said as several people laughed at the prank. “It’ll be the first skiing outhouse.”

A few minutes later, Owens banged the door open with the front of his chair and wheeled out, unfazed.

This story from the Steamboat Pilot & Today via the Associated Press.
Vail Daily, Vail, Colorado

Spitzer willing to bet on research