A cruel joke, a broken spine, a new purpose 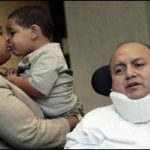 Pedro Toala, soaked with human waste and blue-ish chemicals, could hear the kids laughing outside the portable toilet they had just tipped over.

Toala was inside, face down in the liquid that had spilled from the toilet’s holding tank.

He tried to turn over, but could not move his legs. He couldn’t even feel his legs.

He worked to push himself out of the filth, mustering just enough strength to keep his mouth above it. Something had splashed his face when the building tipped and he tried not to swallow.

Unable to free himself and unable to move, he prayed.

“God, help me get out of here.

“God, help me forgive the kids that did this to me.”

They were still out there, still laughing.

“Listen,” he said, in case they could hear. “This is something serious. Please call an ambulance or somebody to get me out of here.”

A few minutes later – five or 10 minutes, he’s not sure – he felt the portable building being moved again. Someone was turning it, so the door would be on the side. Gravity forced Toala down the wall.

Someone pulled the door open and dragged him out.

He heard some kids say, “Those are the kids that did this to you, mister. Turn over and you can see them.”

But Pedro Toala – now laying face down in the dirt below the I-95 overpass – could not turn over.

Nurses turn Toala every two hours to prevent pressure sores. The DART bus driver, who has health insurance coverage through DART, is at Magee Rehabilitation Hospital in Philadelphia, learning how to live without the use of his legs.

Toala had just parked his bus at DART’s yard off Wilmington’s Adams Street.

He worked as much overtime as he could get. On this day he had driven DART’s Route 1 bus into Claymont, the 36 out to Milltown Road, the 11 to Brandywine Hundred and the 10 to Centreville.

With kids to feed and a new mortgage on a split-level, the money came in handy for him and Yira Graciano, his wife of three years.

Now he was in a hurry to pick up his daughters and take them home.

He got in his car, then realized he had to go to the bathroom. Spotting the portable potties at the Adams Street basketball courts under I-95, he pulled over and walked across the street.

A few kids — 10 or 12 years old maybe — were playing basketball on the far side of the asphalt park. There were almost always kids here, Toala knew. He had lived just a few blocks away on Elm Street until last August, when he and Yira moved to Milltown Road.

Toala went into the toilet, the door closing behind him. He heard laughter — and it was getting closer.

Then somebody shoved the building and it started to tip.

He pushed on the door, but it wouldn’t budge. Were they holding it closed?

He felt a sharp crack in his back. And then he was face down in the sludge.

When the ambulance arrived, Toala told paramedics he couldn’t move from his chest down. He lay there on the ground, still soaked in filth.

“Some of them wouldn’t touch me because of the smell,” Toala said. “Finally one of them said, ‘I’ll get him up. I’ll get him on the stretcher.’ ”

Yira Graciano was at home when the call came: She should go to Christiana Hospital.

“Are you sure it’s my husband?”

They were doing an MRI on Toala when she arrived. It showed that his spine was broken near the base of his neck.

“I don’t know if I’m going to make it,” he told Yira as they prepped him for surgery.

He didn’t want her to tell anyone but she said it was too much for her to handle on her own. She called her brother.

“And he told me, ‘Call his family. This is very serious’, ” Yira said.

By then, Toala was in surgery. The surgeon’s priority would be to ensure there was no further loss of nerve function, no deformity in the spine and no pain in the back, said Dr. Christopher Formal, a spinal cord injury specialist at Magee. It took about seven hours.

“I thought I was going to die,” Toala said of the next few days. “I felt helpless. I couldn’t do nothing. I was on all these drugs. They gave me morphine. … I thought I was in hell. I don’t really wish that on nobody.”

Yira stayed at his bedside. Family and friends came. Checks arrived from people Toala had never heard of.

“Being a bus driver — everybody knows him, especially in the city of Wilmington,” said Toala’s pastor, the Rev. Cisar Ibañez of Centro Cristiano Vino Nuevo (New Wine Christian Center) in Bear.

“By the second or third day, I had heard from about 250 employees — what can they do to help Pedro?” said Stephen Kingsberry, DART’s executive director.

Met wife on the bus

Toala, one of those chatty, friendly drivers who bus riders take to, has almost 14 years on the road with DART.

“He’s just always a very, very jolly person,” said Mike Eller, a scheduler for DART and a friend of Toala’s. “He never complains and he always made everybody happy when he was around.”

“We get complaints sometimes about drivers,” Kingsberry said. “We’ve never gotten one about Pedro. In fact, it’s the opposite. People tell us how good and wonderful he is. It’s kind of like a hairdresser. You tell him your life story and he gives you great advice. … The customers love him.”

One customer married him.

Yira Graciano was coming out of a bad relationship in 1999 and not looking to add a man to her world. She met Pedro on the 5 bus and he chatted her up.

“But she didn’t want to pay attention to me at all,” Toala said.

A friend told Yira he was a good guy, but she said, “No.”

Then one day she was in a jam. She had missed a bus to Dover, where she needed to go to complete the citizenship process. She is from the Dominican Republic.

A friend suggested she tell Toala. She got on his bus and told him.

“He took me to Dover in his own car,” she said.

She bears her son’s tragedy her own way.

“When my mother realized I was going to be in a wheelchair for a while, she started to cry,” Toala said. “I tell her, ‘Be strong. I will walk again.’ ”

Nobody knows for sure if he’s right.

Toala’s face shows the strain of the Physical Therapy he is doing at Magee. He works two hours in the morning, two in the early afternoon, two in the late afternoon just before dinner.

He has lost 26 pounds since the day he was injured, when he had 280 pounds on his 5-foot-4 frame. He has not lost heart. He laughs a lot; he chats with staff members and others working to recover. He does not complain.

“You can choose to die,” Ibañez, the priest, said. “At intensive care, you can choose ‘I don’t want to live like this’ and not make any effort. But he’s been fighting all this time. As long as he is breathing, he wants to live. He has a great attitude.”

Yira is at his side often, making the 80-mile round trip to Philadelphia three times a week, staying over on the weekends.

“She has surprised me, being so strong,” Toala said.

“He gave me the strength when my father passed away four years ago,” she said.

Toala hates it that his wife has to run the house by herself. Family and friends have helped with the yard, with the day-to-day stuff. One of them fixed the window when somebody broke into the house while she was with him in Philadelphia a few weeks ago.

And Toala says he has come to terms with his situation. He is at peace, he said.

“I have seen him sad and I have seen him concerned — especially when he was in intensive care,” Ibañez said. “He couldn’t talk. He was being sedated. He knew he was not in good shape.

“But when he got out of there, when we first visited him at Magee, his face was different. You could see light and life in his face.

“Emotionally, I thought it would be devastating for him,” Ibañez said. “Sometimes you cannot measure the spiritual strength of a person until all this pressure comes on you. I don’t know if I would be able to bear something like that.”

It’s not that Toala’s situation has changed much. If anything, the gravity of life with a spinal cord injury has become clearer to him and his family.

Toala asked the doctor about 10 days ago if he would ever be able to walk again.

“He said, ‘Only God will help you. You’re probably going to stay this way,’ ” Toala said. “He’s not sure what’s going to happen. … But I took it very strongly. I keep praying that God is going to help me out.”

He hopes to return home in about a month. Renovations will be needed at their split-level home. A new vehicle will be necessary.

But a long, difficult road lies ahead for the popular bus driver and his family.

Ibañez can’t say why such a thing happened to Toala.

“These questions have no answers,” Ibañez said. “It’s not that they were trying to hurt him. It’s really sad … something nobody will understand. But the outcome — we need to see how we can help him. He’s not asking for anything. He’s not used to that. He has worked all his life. But we are trying to help as much as we can. And we pray that God will open doors for him.”

Toala believes God will do it.

“He has another purpose in life for me to do for him, and in the future I might realize what it is,” he said. “Right now, I need the strength to keep up. Every morning I pray to God to give me the strength.”

For the rest of the day, Toala works on regaining strength, balance, flexibility and the ordinary skills he’ll need when he goes home. He wants to be able to take his little boy to the movies again, he wants to be there when his daughters have their quinceañera celebrations — the all-important 15th birthday parties. He wants to be there for his family.

His voice breaks when he says that.

Wilmington police have no leads on who tipped the privy over, Master Sgt. Steven T. Elliott said.

“Those kids probably didn’t know they were doing something wrong,” Toala said. “Maybe they’re going to live with that in their heart and they’ll be haunted all their life.

“But I have no grudge toward these kids or whoever did it,” Toala said. “I forgive them.”