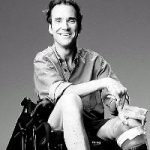 When ex-football and lacrosse star Jim MacLaren graduated from Yale a little more than 20 years ago, he thought life’s plan for him was to become an actor, a dream he maintained even after he lost a leg getting hit by a bus in New York City. Neither did the accident prevent him from becoming a successful triathlete. But while competing in Southern California in 1993, he was struck by a van, breaking his neck and making him a quadriplegic. After a bout with Depression, MacLaren realized his true calling. He has spent the past 10 years working as a motivational speaker, inspiring others to overcome their perceived problems. Last year, he won the Arthur Ashe ESPY award for courage, an honor presented by Oprah Winfrey. Recently, MacLaren, who’s still acting in addition to running a philanthropic foundation, slowed down long enough for a chat.

Anthony Cotton: How are you these days?

Jim MacLaren: Well, it’s been an interesting summer. I’ve spent three weeks in the hospital; I’ve been plagued with bladder infections and just part of the spinal cord deal. And yet I’ve been blessed enough to continue my work as a motivational speaker and promoting my foundation and helping people. Oprah has a way of opening your world up. I’ve been lucky. No matter how bad I feel, there’s something like a rope that just gets me through it. My friend says I’m like a hockey player; I just suit up and get through it.

AC: I was going to ask about you and Oprah. You two are buddies now?

JM: Well, I don’t have her home number, let’s put it that way. She initiated the conversation with me at the ESPYs, then I was on her show. She was so great. She taped six shows that day, and afterwards, everyone wanted to have their picture taken with her.

I could tell she was exhausted and I really didn’t want to have my picture taken with her, so I said, “Oprah, you look exhausted, you don’t have to do this.” And she said, “No, I want to have my picture taken with you.” It was such a nice moment, for her to make the effort. There’s sort of Oprah the woman and Oprah the archetypal figure, sort of like Marilyn Monroe or Madonna, or any icon. They’re a person but they’re also supposed to be superhuman as well.

JM: Well, if I were going to be my usual self-effacing self, I’d play that off, but yes, that’s what happens. I guess where I’ve been lucky, and the thing about these physical problems….People have often said, “Jim, why do you think you’ve had two accidents?” And I say that maybe it’s because I just needed to sit down. I’m half-joking, but I’m half-serious. Someone will ask the difference between me now and six or seven years ago. I tell them that now when people speak to me, I hear them with my heart and not with my head. It doesn’t build on my ego.

AC: There have been a couple of quotes attributed to you that I wanted to discuss, and one of them was, “I needed these accidents in my life.”

JM: Socrates said that an unexamined life is a life not worth living. For me, these accidents, especially the second, compelled me to make a choice. When I went through my darkness period, I thought, “I don’t know if I can do this.” But for me, there was no choice but to use this as an opportunity for self-knowledge and reflection and utilizing all my abilities to spread love and compassion throughout the world. All the blocks have fallen into place, for myself and also for others – not necessarily to inspire them, but I try to challenge people. We all have a human spirit. I’m hoping it doesn’t take you two accidents to start looking at yourself.

AC: The other one was, the idea of all pain coming from attachment.

JM: It’s a definite Buddhist perspective. I don’t think it’s pain that bothers us so much, but the emotional part of our heads that makes it means something. Just because you lost your last sale doesn’t make you a bad sales person. But we immediately do that, attach meaning, especially when it’s negative. I’ve gotten all my sensation back, which is a gift, but it means I’m in chronic pain 24 hours a day. Although that may sound horrible to some people, I wouldn’t trade it. When I wake up in the morning, I feel like wet cement plugged into a wall. If I thought to myself that the rest of my day is going to go the way I feel now, I wouldn’t get out of bed. But what happens, instead of the pain becoming the central part of my being, you engage life. It doesn’t go away, but it becomes Peripheral.

AC: There are paraplegics and quadriplegics who it seems are always hoping to get those sensations back, in the hopes they will walk again. Is that what you want? For these sensations to lead to more?

JM: I was initially diagnosed with a complete spinal cord injury, told that I would never move or feel again from the chest down. Then years go by and my legs start moving and I start getting sensation back….I had, years ago, planted a seed in what I called my garden of hope. If it’s meant to be that I get things back, great. But in the meantime, I have to live in this body, so let’s figure out how to do that.

For the first three months, I just felt like a body, that I had lost my personality. Then things got better, and then things started coming back. So I had learned to be happy in this body even when nothing worked. I’m at this place now…when I was at Craig Rehabilitation Institute in Denver, I remember the first day I took steps. I was worried that all the young quads would be upset with me.

JM: Because none of them could do that. There was a group of them. The humor is incredible. These young, angry kids, the jokes are definitely not made for prime time. It’s how they deal with it. But the leader wheeled over and said, “None of us are mad at you. We figure, if anybody deserves to do this, it’s you.”

I’ve met people who say if they can’t walk by the time they’re 40, they don’t want to be alive, then others just deal with what they got, playing wheelchair rugby or basketball. It’s really mixed.

Amy Van Dyken-Rouen, from Olympian to paraplegic to inspiration