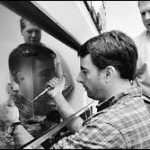 President George W. Bush’s veto Wednesday of embryonic stem-cell legislation is a big setback for Michigan, one of a handful of states with the most restrictive laws in the country, patients and researchers said.

“My philosophy is, I live for today and hope for tomorrow, and today, my hope for tomorrow has been dashed,” said Danny Heumann, a spinal cord patient from Ann Arbor who works with a statewide campaign pushing for changes in Michigan law.

Researchers in Michigan can use only embryos derived from fertility procedures in other states.

But like the emotional debate in Washington, D.C., not everyone agrees.

Right to Life of Michigan, which supports the Bush veto, said researchers could concentrate on treatments using adult stem cells — those obtained from the umbilical cords of newborns or donors for cancer patients.

Legislation vetoed by Bush would have allowed federally funded researchers access to a larger pool of embryonic stem cells obtained from fertility procedures. Later Wednesday, the House failed to override the veto.

Pamela Sherstad, director of Right to Life of Michigan, said the veto allows researchers to concentrate on more proven treatments. Taxpayers should not have to fund more experimental stem-cell therapies, she said.

The debate ignited Wednesday gives the public a science lesson about the two basic types of stem cells.

Embryonic stem cells are derived from in vitro fertilization procedures. Each year, thousands are discarded as medical waste, once couples consent. Small numbers are donated to infertile couples.

In announcing the first veto of his presidency, Bush surrounded himself with 18 couples whose children were born from leftover embryos.

“This bill would support the taking of innocent human life in the hope of finding medical benefits for others,” Bush said.

“Because of the unique properties of embryonic stem cells, we just can’t expect the same range of benefits from using adult stem cells,” said Dr. Ed Nieshoff, a spinal cord injury research scientist at the Michigan Rehabilitation Institute in Detroit. He called the veto “a tremendous setback not only for Michigan but the nation.”

The institute has been trying for more than a year to obtain FDA approval for a study using adult stem cells in people with spinal cord injuries.

“I have hundreds of patients who are anxious to pursue treatment in a U.S. academic center and thereby avoid extensive travel for questionable treatments offered elsewhere in the world,” said Nieshoff, who has a spinal cord injury from a diving accident.

Patients pay as much as $50,000 for medical care alone for procedures abroad. Some of these procedures are barely studied; some are in more accepted stages of research.

Dr. Sean Morrison, director of the University of Michigan’s Center for Stem Cell Biology, said embryos derived from in vitro procedures are “microscopically small balls of cells whose centers are taken out and allowed to grow in dishes.”

Under current law, only embryonic cells derived from IVF procedures before Aug. 9, 2001, can be used in federally funded research. Those cells were contaminated because they were preserved with animal products and cannot be used for human studies, he and others said.

Bills to change Michigan law have languished in the House and face tough opposition in the Senate, where a companion bill with bipartisan support was introduced earlier this year.

On Your Last Nerve: Researchers Advance Understanding of Stem Cells