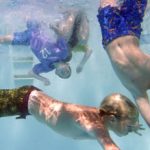 Summer is the peak period for diving accidents, say spinal cord injury experts and lifeguards, who warn of the dangers of diving into shallow water.

Last summer in Quebec, 14 people suffered a spinal cord injury while diving, according to the Lifesaving Society, which certifies lifeguards and analyzes drowning deaths to promote safety.

About a third of the injuries happened in shallow above-ground pools, and another third in rivers and lakes, spinal cord injury specialists at Montreal’s Sacré-Coeur Hospital said Wednesday.

Boys were most at risk, especially if drinking was involved.

Jonathan Legault, one of the Quebecers who injured his spinal cord last year, would like people to learn from what happened to him and take proper precautions when they swim.

Legault was celebrating his engagement at a backyard pool party when he followed a friend who dove off the side.

“I broke two Vertebrae, C5 and C6, just an inch above the bump you have on the back of your neck,” Legault recalled. “I couldn’t move anything below my shoulders.”

Legault has made progress, but said the injury meant he was no longer able to work and his wedding was cancelled.

The injuries could be avoided if people practised a feet-first policy, said Raynald Hawkins of the Lifesaving Society.

It’s not appropriate to dive in a backyard pool, and rivers and lakes should be at least three metres deep before diving, the society advised.

Diving at a public pool equipped with diving boards is a safer option, Hawkins said.

Model in wheelchair shares what it meant to be a part...