His road to stem cell treatment led to Portugal 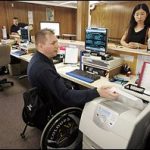 After hanging out with relatives in southeastern Pennsylvania until the wee hours on Feb. 18, 2001, Steve Yaros headed home, south on Limestone Road toward Pike Creek.

It was just before 4:30 a.m. He drifted into sleep and his Chevrolet Cavalier drifted off the road, striking a utility pole and causing several power outages in the area.

Yaros wasn’t wearing a seatbelt. His skull smashed against the car’s door jam, and two of the discs in the Cervical region of his spinal cord were shattered. When Yaros left the intensive care unit at Christiana Hospital, he left a tetraplegic, with complete or partial paralysis in all four limbs.

Still, his injuries could have been a lot worse. He has some strength in his arms, hands and fingers, and is able to drive a specialized 2002 Dodge Caravan. And within eight months, he was back on the job as a senior Motor vehicle technician at the Delaware Department of Motor Vehicles in New Castle.

On Friday, Yaros underwent an olfactory mucosa autograft — a type of stem cell surgery — at the Hospital de Egas Moniz in Lisbon, Portugal. In this surgery, cell tissue is extracted from the uppermost part of a person’s nasal cavity and transplanted into their spinal cord. Researchers believe these stem cells can help repair the damaged spinal cord.

“It seems like these cells have the same potential in terms of forming a variety of cell types, just like embryonic stem cells,” said Jean D. Peduzzi, an associate professor at Wayne State University Medical School in Detroit.

More than 80 patients worldwide, including about 40 from the United States, have undergone the surgery, which costs almost $45,000. The operation isn’t approved by the U.S. Food and Drug Administration, so Americans must go outside the country for the procedure.

A study involving seven paralyzed patients was published in the most recent issue of the Journal of Spinal Cord Medicine. The subjects who elected to go through the stem cell procedure ranged in age from 18 to 32 and were operated on between July 2001 and March 2003. A year after the surgery, none was able to walk on his or her own, but all developed more control over motor skills. Some also experienced more control over their bladders and bowels. For five study participants, the improvement came after years of no progress.

“We don’t know the strength of the placebo effect,” said Peduzzi, one of the study’s authors. “We can’t get rid of that. But we waited a year until the patients had the surgery to see if they improved.”

Yaros would love to be able to walk again, but he said even minor improvement would be worth it. For instance, his grip has been so weak that it’s difficult for him to get his cash withdrawal card out of an ATM machine.

“I can’t even tear a piece of paper,” he said before leaving for Portugal.

He learned about the stem cell procedure last year from a friend. A few months ago, he flew to the Rehabilitation Institute of Michigan in Detroit, where a doctor evaluated his X-rays, his physical abilities and his mental health to determine if he qualified for the surgery.

“We don’t endorse it,” said Cheryl Angelelli, spokeswoman for the institute. “We give people the pros and the cons.”

Yaros was a candidate for the surgery because he’s under 40 and it has been less than six years since his injury. It also helped that the length of his injury was only 1 centimeter.

He credits his parents, John and Ruth, and his brother Mark for taking care of his nursing needs since the accident. He’s also thankful to his employer and his co-workers. A handicap-accessible space was created for Yaros to park his minivan. And Friends of Steve — a fund-raising effort spearheaded by his boss Marion Davidson — helped raise $39,000 for the operation. (His family covered the remaining costs). The Friends of Steve effort will continue over the next year to help raise money for therapy costs and equipment.

“As soon as he found out that he could go, we started raising the money,” Davidson said. “Anybody who knew him donated things or money because we all love him.”

A week from today, Yaros will return to the United States, where he’ll begin rehabilitation. To him, the trip and the surgery are worth the risks.

Artists ‘Rise Up’ above their disabilities at Jersey City exhibit