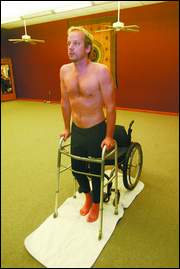 It has been six months since a nasty bicycle spill on Northwoods Boulevard left Truckee resident Scott Gledhill with a severe spinal cord injury and a prognosis that he would never walk again.

Recovery has been long and arduous, and the battle is not yet won, but Gledhill says the fight to walk is far from over.

“The only thing I can accept is that life moves at a slower pace,” Gledhill, 41, says. “But I won’t accept that when I am 50 I’ll still be in a wheelchair.”

Spinal cord injuries, which affect 11,000 people every year, according to the Spinal Cord Injury Information Network, can result in varying degrees of paralysis. Gledhill’s injury to his 10th Thoracic Vertebrae (T10) in his upper back caused his spinal cord to tear partially.

The crash left him paralyzed originally from the bellybutton down. Paralysis has since descended into his mid-thighs.

In many cases, the damage is permanent, but in others, like Gledhill’s, the power to recover, perhaps fully, comes down to a strong body and an even stronger will.
An avid triathlete, Gledhill says he refuses to believe paralysis will be permanent, and that he is not yet ready to participate in modified sports.

Giving into that fate is too big a pill to swallow.

Instead he has been diligent in his daily yoga practices in an effort to strengthen his spine. He is back on a stationary bike, and is standing with a walker. Sometimes — very slowly — he will take a few steps.

“It’s been a rollercoaster,” Gledhill says. “Some days I have total confidence in my recovery, and others I feel like this is a life sentence.”

But recovery is happening, it’s just much slower and frustrating than he envisioned.
“I’ve hit none of the milestones I’ve expected to hit,” he says. “I do eventually [reach them], but not in the time I wanted.”

Last weekend, nearly six months to the day since he skidded off his road bike and landed back-down on a tree stump, still clipped into his pedals, Gledhill planned to be standing at the starting line of the Great Ski Race, the cross-country ski event in which he has participated for years.

But Gledhill wasn’t there, and he says his emotions that day were deep.
“I have a lot more faith in him than he does sometimes,” says Tanya Rose Paul, owner of Bikram Yoga where Gledhill practices. “The process is slow, but he is continuing to inspire and amaze us.”