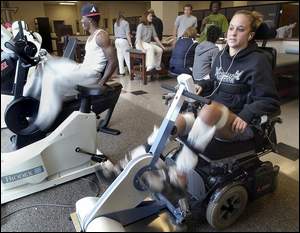 The experimental surgery that gives hope to Tara Blackwell and others with spinal cord injuries is being developed in clinical trials under the direction of Dr. John McDonald.

He is the director of the International Center for Spinal Cord Injury at Kennedy Krieger Institute in Baltimore.

His work is part of an international research project that experts hope will result in a simple, outpatient surgical procedure that can speed Regeneration of the spinal cord and the recovery of patients with spinal cord injuries.

Animal tests are under way. It is hoped humans will benefit within a few years.

The activity-based Rehabilitation that Blackwell currently is doing at Troy University is the centerpiece of McDonald’s work. He also has been involved in tissue transplants in rats.

Joy Dobler, the wife of former NFL star Conrad Dobler, is a fundraiser for Kennedy Krieger and has been a quadriplegic since a fall 41/2 years ago. She said experiments on rats with severed spinal cords have been dramatic.

“It had a phenomenal response,” she said. “He has videos of mice walking on pencils and jumping on cages after spinal injuries that were induced with little ball bearings, completely severing their spines.”

Primate studies are in the initial stages, McDonald said. They are based in Bogota, Colombia, and focus on nervous system genetics and stem cells.

“We’re collaborating with that group because of their expertise,” McDonald said. “There are aspects of that study that are uniquely doable from a technology standpoint.”

The great hope is to develop a universal line of transplantable tissue that will not be rejected by the body. Embryonic stem cells offer the greatest hope because they can be implanted with the DNA of the transplant recipient.

“Joy and Conrad have been like angels to us,” said Patsy Blackwell, Tara’s mother. “It was a blessing. It was a miracle.”

The Doblers helped the Blackwells make the trip to Kennedy Krieger last year for their first meeting with McDonald. Tara and Patsy Blackwell will return to Baltimore this summer, when Tara will undergo a series of tests and procedures. Her goal is to be among the first to participate in the human trials.

McDonald believes proof-of-principle primate studies can be completed within a year. Human studies can begin after that. Exactly when is unsure.

“It’s not possible to put timelines on it,” McDonald said. “There are critical studies to be done, and we’re not ready to move on to humans. But we want to move forward with a strategy that will be effective in humans, and it’s a relatively short time frame.”

Conrad Dobler believes it could be a matter of months, not years.

“When most scientists say they’re close, they usually mean 15 or 20 years,” Dobler said. “But we’re close to this, right now. I believe it’s right around the corner.”

There are many hurdles to clear, Joy Dobler said.

She was injured on the Fourth of July when she fell out of a hammock that was a foot-and-a-half off the ground. She has regained considerable sensation in her shoulders and movement through intense rehab, cycling, electrical stimulation and weight lifting work.

That sort of work will play a big part in whether the experimental surgery is successful. The surgery is one part of a lifelong process.

Stem cell research is a controversial topic that has drawn fire from religious and anti-abortion groups, who believe that fertilized embryos constitute human life. McDonald stressed that all stem cells associated with the project to date have been animal.

Tara Blackwell said she has thought deeply about the procedure and is certain that it doesn’t constitute the taking of a life.

“I would never want to do anything to kill another person, or to hurt another person to help myself, even if it meant me getting well,” she said. “But this can do so much, for so many people. I don’t think God would give us this knowledge if he didn’t want us to use it.”

The risk to herself, should she be one of the first human subjects, is not even a factor, she said.

“As an athlete, I will always do everything I can to get out of this chair,” she said. “I will never settle for spending the rest of my life in a wheel chair.”