Murderball Nominated for an Academy Award

Nominated for an Academy Award for Best Documentary Feature, Murderball also took the Audience Award for an American Documentary and a Special Jury Prize for Editing at the 2005 Sundance Film Festival. MURDERBALL is presented by THINKFilm in association with A&E Indie Films and is an EAT Film Production.

MURDERBALL features fierce rivalry, stopwatch suspense, dazzling athletic prowess, larger-than-life personalities, and triumph over daunting odds. But “Murderball,” the original name for the full-contact sport now known as Quad rugby, is played by quadriplegics in armored wheelchairs. MURDERBALL is a story like no other, told by men who see the world from a different angle. 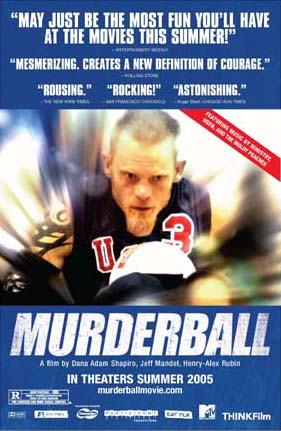 Quad rugby players have suffered injuries that have left them with limited function in all four limbs. Whether by car wreck, gunshot, fist fight, rogue bacteria, or any of an endless list of possible misadventures, quad rugby’s young men have found their lives dramatically altered. Watching them in action—both on-court and off—smashes every stereotype one has ever had about the handicapped. It also redefines what it is to be a man, what it is to live a full life, and what it is to be a winner.

2002 World Championship
MURDERBALL begins at the 2002 World Championship in Sweden. Top-ranked Team USA has dominated the sport for 10 years, and every national team would like to push them from their pedestal. The rivalry between USA and Canada, though, is especially personal. Canada’s coach is JOE SOARES, a former American all-star. When Joe (who is in his forties and is much older than most of the players) was cut from the 2000 USA team, he went north to coach, many say to exact revenge on his former teammates. “How does it feel to betray your country?” one USA player taunts him. When Canada wins by a point in the final seconds, the USA team is humbled and despondent.

Coach Joe vs. Zupan
The bad blood between Team USA and Team Canada is personified by the intense rivalry between Joe and USA team spokesman Mark Zupan—MURDERBALL’s chief protagonists. Joe, unlike most of the other players, grew up with his Disability as a result of childhood polio. The combative, competitive drive that makes Joe such an exceptional coach can turn inward at home. Himself the son of a driven and demanding father, Joe struggles to connect with his sensitive 12-year-old son Robert, even though Robert clearly longs for Joe’s attention and approval.

Mark Zupan is an equally domineering personality—macho tough, but also funny and philosophical. A good-looking star athlete before the freak accident that injured him, Zupan has worked his way through suicidal rage and physical devastation to become a focused competitor. His best friend, Chris Igoe, who drove the car that caused the accident, and who was physically unhurt, bears a load of guilt.

Sex, Fate, and a Lucky Heart Attack
As Zupan’s relationship with his punk rock girlfriend makes clear, impaired limbs do not necessarily result in an impaired sex life. MURDERBALL lets us in on the athletes’ pleasant discovery that, for many women, their injuries are hardly a turn-off. The trash-talking, testosterone-fueled atmosphere of the players’ pick-up scenes and poker games are full of familiar jock bravado, but the sobering reality is that each of the men is coming to terms with overwhelming obstacles, both physical and emotional.

Taking their hard-won experience and quad wisdom with them, Zupan and members of his team visit patients in rehab, men still in the early stages of recovery and adjustment. One such character is KEITH CAVILL whose passion for motocross racing paralyzed him. Keith’s eyes light up when Zupan offers him a spin on his tricked-out rugby chair. A murderball player is born.

Meanwhile, a heart attack strikes Coach Joe. We see a man transformed by this wake-up call—the drive to prove himself is tempered, and the reactions of his wife, team, and especially his son demonstrate how much Joe is really loved.

2004 Paralympics Games, Athens
The hard work and training culminate at the Paralympics in Athens. Zupan’s old friend Chris, who drove the car that caused Zupan’s accident and has shied away ever since, will be there to watch him play for the first time. Friends and family of all the players gather in Greece to see whether Team USA takes the gold, cedes their dominance in the sport to Canada, or loses to yet another team. Whatever happens, these men have taken the game of “Murderball” —and themselves—as far as they can go, and beyond.

Purchase your copy at http://www.shepherd.org