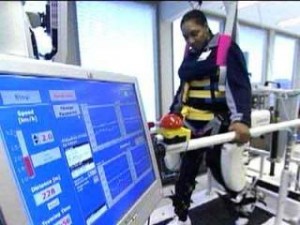 CHICAGO — Spinal cord injuries are among the toughest conditions doctors encounter. So far, science has little to offer paralyzed patients.

Not all spinal cord injuries are permanent. Doctors have found that patients with slight feeling can regain more movement than ever thought possible.

Kwan said that with the help of “an amazing machine,” one Chicago woman is taking big strides.5

“I was out at a nightclub and I believe someone got into an altercation, came back and started shooting. I remember falling,” Gernard Fulton said of the night of Oct. 1, 2004.

Fulton, a healthy, active mother of two, was left with a bullet in her spine.

“I didn’t know that I was paralyzed,” she told NBC5.

But, she woke to a new life.

But Kwan said there was some good news.

Fulton turned out to be one of a small minority of paralyzed patients with some feeling below their injury.

“That means at least some of the nerves are working in the spinal cord all the way down, and you have a little bit of function left,” said Dr. Todd Kuiken, of the Rehabilitation Institute of Chicago.

It’s called an Incomplete Injury and doctors at the Rehabilitation Institute are studying whether the robotic machine they’re using can help those patients heal. 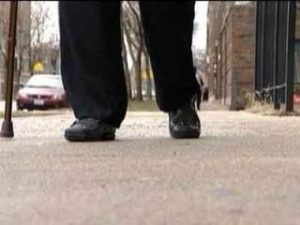 Fulton was introduced to the Lokomat machine.

“She really started showing improvement around the sixth week of the study,” Fulton’s therapist said.

“I was happy when I could wiggle a toe or finger,” the patient said.

After months of training, Fulton has made great strides. Doctors still don’t know why it works for some patients. Doctors think it may reawaken the connection between the brain and the leg.

“You’ve got your brain up here,” Kuiken said, ” your body down here and the thing that connects it, the spinal chord. So, if the spinal chord is connected, it’ s like the main phone wire being damaged. So, we have to re-establish that brain-body connection any way we can.”

Ten months after stepping into the Lokomat, Fulton did the impossible: she went home.

She wasn’t able to return to her own apartment, three floors up, and had been living at her sister’s more accessible home.

There are still struggles, Kwan said. Fulton walks with a cane and hasn’t regained movement in her left arm, but it’s what she can do that she is most thankful for.

Those baby steps may be part of her cure.

“You have someone who has been in a chair, not able to walk,” Kuiken said. “Then to be in this device and have your legs moving in a more natural way, it’ s very exciting and gives everybody hope.”

Without the Lokomat, Kwan said, a patient would need three to four therapists holding her up to help mimic walking and that can only be done for about 10 minutes.

The machine allows a longer workout to build up the legs faster.

It may help not only people with spinal chord injuries, but those with other conditions as well, such as stroke.