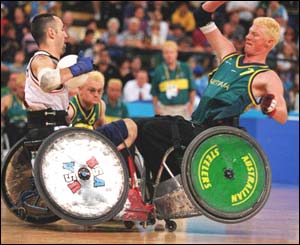 The wheelchairs crashed with a loud metallic “thunk” that echoed through the gym. Jaffer Odeh, wheeling furiously, slipped through a crease in the tangle of athletes to score another goal.

Several basketball players shooting on adjacent courts at the Rec Center on the University of Michigan’s Flint campus grabbed chairs and watched in silence. The wheelchair rugby teammates continued to bash into each other as they darted around the floor, frequently passing a volleyball.

After one play is whistled dead, Odeh playfully crashes into teammate Felipe Vanegas and Odeh’s chair tips over. “Get up, you pansy,” someone says playfully as a teammate helps Odeh right himself.

The scene, at a recent practice for the Great Lakes Storm wheelchair rugby team, seems far removed from the other world Odeh navigates as a third-year medical student at U-M in Ann Arbor.

Yet it represents the comeback he has made since an automobile crash left him partially paralyzed in 1998. And it epitomizes the fun and satisfaction Odeh expresses for a life that takes place in disparate arenas – athletic and medical – each combining a high level of emotion and skill.

Odeh’s life changed on May 24, 1998, a week before his high school graduation. He fell asleep while driving home to Stockbridge, hit a tree and broke his neck. He sustained a spinal cord injury to the C6 and C7 Vertebrae in his neck.

Odeh realized the gravity of the injury soon after he began rehab at the U-M hospital, when he registered the lowest possible ratings on his grip strength. “This is something really big,” he recalls saying to himself that day.

Yet the injury failed to dim a competitive spirit that drives Odeh in everything he does. He had been a multi-sport athlete in high school and loved the contact and emotion of football. “I’m glad this happened to me, because I know I can handle it,” he says. “God only gives you what you can handle.”

When the freshman class arrived at U-M in the fall of 1998, only months after the car crash, Odeh was with them. For the five years of his undergraduate study, he toured the Ann Arbor campus in his wheelchair, then began med school.

He still spends most of his time in a wheelchair, though his upper body has recovered almost completely and he can stand and walk short distances with crutches.

He began playing wheelchair rugby full-time when medical school began, and is in his third season with the Storm, a team of southeast Michigan players ranked 14th in the country.

On the court, Odeh, who is of Palestinian descent, presents a contrast to the effervescent and diligent medical student known to faculty and friends. He wears a black skull cap and a sleeveless shirt, along with elbow pads and thick, tacky gloves to use in pushing his wheelchair.

The team breaks into four-person units for a scrimmage, and Odeh’s talent quickly surfaces. He dominates on offense, with quick, slashing moves. He leads the pack during wind sprints, then skids to a quick stop, turning his wheelchair around in an instant.

“I generally consider myself a nice guy,” he says. “But when I’m on the court, I’m a lot more aggressive and yelling a lot. It’s that competitive spirit coming out.”

A month ago, Odeh was invited to try out for the U.S. national team in Birmingham, Ala., for a spot on the 2006 World Games in New Zealand. He competed against more than 30 of the world’s best wheelchair rugby players and was cut because of his relative inexperience. But the coach promised he would invite Odeh back for tryouts for the 2008 games.

Odeh’s teammates say they respect his fire and talent. “He’s far and away the speed of our team,” says Brian Sheridan, a six-year veteran. “You can tell when someone’s an athlete. I’m sure he kicked butt outside of the chair in high school.”

Wheelchair rugby was developed in Canada as a quadriplegic equivalent to wheelchair basketball, and was introduced in the United States in the early 1980s.

The sport was originally called Murderball because of its aggressive nature, but was eventually changed to wheelchair rugby. The recently released documentary “Murderball,” which details the commitment and passion competitors have for their sport, sent wheelchair rugby into national prominence.

Teams compete around the world, with more than 45 squads in the United States. The Storm’s season runs from early fall into early spring, and includes next weekend’s tournament in West Palm Beach, Fla.

Following the team everywhere is a trailer loaded with specially altered wheelchairs, tools and a compressor, to keep tires inflated. “During the games, I have a regular pit row going,” says Doug Finkbeiner, an amputee from Saginaw who serves as mechanic and self-proclaimed “roadie” for the Storm.

Coach Brad Gomoluch leads the team through a variety of offensive and defensive scenarios, interspersed with lung-bursting sprints. “Everybody should know everybody else’s job by now,” he hollers.

Odeh says being in a wheelchair helps him comfort patients, who look at him and understand he’s been through something similarly traumatic. Yet medical school faculty members say he never asks for special favors or conveys a sense of disappointment.

“He’s so matter-of-fact about his Disability that it puts others at ease,” says Dr. Brian Zink, associate dean for student programs at the medical school. “It allows them to deal with him for the bright and talented person that he is.”

Next year, Odeh plans to begin a residency in anesthesiology. He notes that anesthesiologists help guide you in and out of surgery, so a timely joke or remark can ease a difficult moment. “That is a huge deal,” he says. “I love being with people, talking to them and making them comfortable.”

Odeh draws on the empathy he gained after his accident, along with the time a brother was severely injured in an auto crash. He also had to watch as his father, Mustafa, died of lung cancer in the summer of 2004.

“It’s being able to comfort families in that horrible situation,” he says in explaining his career goals. “I know what it’s like to have family in the ICU.”

Odeh acknowledges the challenge of combining an athlete’s schedule with school, but emphasizes the importance of balancing life. “I make it work,” he says. “I always make time for the things I love. It’s so easy to let your career take precedence.”

“He knows how to have more fun than anybody I’ve ever met,” says his girlfriend, Lindsay Daniel. “He’s not afraid to do whatever comes into his head, whether it’s improbable or not.”

Daniel tells of how Odeh called her during the middle of the week with news of a road trip to Michigan wine country near Traverse City. He stopped at Bowers Harbor Restaurant on Old Mission Point one afternoon that weekend and told Daniel to wait in the car.

Odeh told the head chef that Daniel was a vegetarian, and got her to make anything Daniel wanted for that night’s special dinner.

Omkar Karthikeyan, a fellow medical student and one of Odeh’s best friends, recalled walking down a hall in the U-M hospital when they passed a teenager partially paralyzed in a hunting accident. Odeh told the young man that he understood his fear, then noted all the possibilities for impaired athletes.

“That’s a real fragile time,” Karthikeyan says of such a moment. “You want any sort of camaraderie you can get. That guy went away feeling real excited.”

During the recent holiday break, when he brought Daniel home to meet his family, Odeh paused during a picture session. He thought of his loved ones, of his evolving career and of his favorite sport.

“I have all in life I could possibly want,” he said to himself, smiling inwardly.