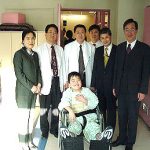 SIHEUNG, South Korea — The boy who became known as “Donor 2” was propped up in a wheelchair when a team of esteemed scientists strolled into his hospital room nearly three years ago.

Nine-year-old Kim Hyeoni had been hit by a car while crossing the street the previous year. Once a chubby-cheeked child who loved baseball and practical jokes, he now was paralyzed from the chest down.

“Sir, will I be able to stand up and walk again?” he asked the leader of the team, a South Korean veterinarian named Hwang Woo Suk, according to an account by his father.

“I will make you walk. I promise,” replied Hwang, who would soon afterward announce a breakthrough in the cloning of human stem cells.

With that meeting in April 2003, Hyeoni in effect became a poster boy in the quest to use cloned stem cells for experimental treatments of spinal-cord injuries.

His father, a Methodist minister, defied the beliefs of many of his fellow church members and allowed Hwang to cut skin samples from his son’s abdomen for the research. Hyeoni’s mother, a nurse, volunteered for the invasive procedure of having her eggs extracted to donate to Hwang’s laboratory.

Now the family is faced with the sinking realization that “it was all a big lie,” said Kim Je Eon, the boy’s 43-year-old father.

The family’s saga captures at its most vivid the disappointment felt by millions around the world. Not only has much of Hwang’s work proved to be a fabrication, the scandal surrounding him is believed to have set back legitimate research for years.

“My heart breaks at the thought we might be further behind than before. But I firmly believe that this kind of research must go on,” Kim said. “We are prepared to do anything for this boy.”

In a lengthy and emotional interview in the basement of Neulsaerom Church in this beachfront community 18 miles southwest of downtown Seoul, Kim described how members of this otherwise ordinary family of modest means became unwitting participants in — and victims of — one of the biggest science scandals of all time.

“Everyone was misled by Hwang. We worked with him under the belief that he was producing stem cells,” said Kim, who smiled serenely through the wrenching account of his family’s tragedy, saying their faith has allowed them to persevere.

Photographs on the minister’s desktop computer show a boy in a baseball uniform grinning mischievously at the camera. Before his accident, Hyeoni was something of a troublemaker, but an excellent student just the same.

His parents were proud and full of ambition for their only son. As is common for many South Korean children, he was sent to cram schools late at night and on weekends to further his academic performance.

The first report at a neighborhood hospital was dire; in the unlikely event that the boy survived, he would be severely brain-damaged. Nevertheless, Hyeoni was moved at 2 a.m. to the larger Gil Medical Center in nearby Incheon, where he underwent surgery. After 28 days, he emerged from a coma. But he was left paralyzed, with difficulty speaking and breathing.

The following year, doctors at Gil informed Kim that his son had been chosen from a group of paralyzed patients as a participant in Hwang’s groundbreaking research into creating the first cloned human embryo for therapeutic purposes.

Family members were thrilled. They knew that such research was thought the best hope for curing otherwise irreversible spinal-cord injuries and nerve diseases such as Parkinson’s. The theory is that cells from a 4- or 5-day-old embryo can potentially grow into replacement tissue for destroyed nerves and that if they come from a genetic clone, the body won’t reject them.

“With this man’s help, you will be able to go back to school,” Kim recalled telling his son. The boy didn’t say much, because “after the accident, he became quiet and obedient. His personality had changed. But I knew that deep inside his hopes were growing.”

Hwang was apparently moved as well by his meeting with the boy.

“I felt like crying. Something about that boy stabbed me in the heart,” Hwang told Jeong Ha Gyun, the president of the Korean Spinal Cord Injury Assn., according to Jeong’s recollection.

Jeong, who is 49 and has used a wheelchair since a car accident 20 years ago, says that Hwang had told him he could not help him because he was an adult with an old injury, but that the boy could be cured.

“He is a young boy who is still growing. I want to turn him back into a normal boy so that he can fight with his friends and pull girls’ hair,” Jeong says he was told.

The boy gave three skin samples taken under local anesthesia. His case appeared in a now-discredited paper published last May in the U.S.-based Science magazine in which Hwang claimed to have produced genetically matching stem cell lines from 11 patients.

(Jinna Park / For The Times)

Hyeoni is the only one whose name has been made public.

Hwang, who was fond of displaying a photo of himself and Hyeoni, told people that the boy would be the first in line when his research was sufficiently advanced for stem cells to be injected into a human patient.

The relationship with the family deepened. Kim and his wife agreed that she would donate her eggs for Hwang’s research.

When a South Korean law took effect last year requiring Seoul National University to appoint an eight-member ethics board to oversee Hwang’s stem cell research, Kim readily accepted Hwang’s suggestion that his participation as a Christian cleric would be helpful.

The increasingly famous veterinarian invited Kim to his laboratories on campus. There, Kim would put on sterile blue coveralls and peer through a microscope as Hwang explained how the genetic material of an egg was removed and replaced by that of the animal to be cloned — a process known as somatic cell nuclear transfer.

“I’m not a scientist, so I didn’t fully understand it. But I did believe he had created a stem cell line for my son,” Kim recalled.

Seoul National University reported last month that Hwang had not created stem cells for the boy or for any other patients and that his May 2005 report was an “intentional fabrication.” On Tuesday, the university is expected to release its findings on Hwang’s earlier claims of creating the first cloned human embryo and the first cloned dog.

“If one paper is fabricated, you have to verify everything published previously. We want to know what is true and what is not,” said Moon Shin Yong, a doctor who is a former partner of Hwang in the cloning effort.

Many South Koreans hold out hope that there is at least a kernel of truth behind the fabrications. The grieving father is among them. He says he will forgive Hwang if he continues his research, toiling away in poverty and obscurity to find treatments for incurable diseases.

“That would be the appropriate penance,” he said.

The minister has been speaking out publicly in favor of therapeutic cloning and even addressing the subject in sermons in his church. He says the 4- or 5-day-old embryo — or blastocyst — that is created and destroyed to produce stem cells does not constitute a life.

“In the Bible, we consider life to be the soul. An organism is not truly created until it has nerves,” he tells his parishioners.

Kim’s views go against those of many churchgoers and have brought him torrents of abuse.

“You are a minister who doesn’t trust God’s providence and power. Do you really think your son can be cured with such egotistic science?” one critic wrote last week on a website reporting on the issue.

One welcome outcome was that in the process of taking fertility drugs in order to donate eggs, Kim’s 40-year-old wife became pregnant. A month ago, she gave birth to a healthy baby boy.

Hyeoni, now 11, still uses a wheelchair and spends most of his time at home with his baby brother and a 15-year-old sister. He rarely goes to school. But his father says he has a positive outlook. When word of Hwang’s fabrications first began leaking in November, the family girded the boy for disappointment so he would not learn about it on television.

“We told him, yes, one day you will walk again,” Kim said. “But you might have to wait a little longer.”