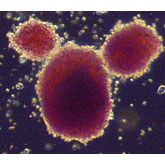 For a child with leukemia or lymphoma, a donation of umbilical cord blood can be a lifesaver. But cords contain only a small amount of blood and may have so few hematopoietic stem cells–the cells that continuously produce red and white cells and platelets in our bloodstreams–that multiple donations are often needed for older children and adults. Now, University of Minnesota researchers have identified a group of genes that guide the functioning of hematopoietic stem cells, a finding that may help researchers grow enough of the cells in the laboratory to give doctors more options in treating patients.

“The goal is to develop the ability to grow stem cell populations from cord blood,” says Stephen Ekker, associate professor of genetics, cell biology and development. “Even to double or triple the number of stem cells available would expand doctors’ ability to treat children with one donor instead of two. Or to treat adults, if we can expand the populations enough.” Ekker and Catherine Verfaillie, director of the university’s Stem Cell Institute, led the study, which will be published in the July issue of Public Library of Science–Biology.

“Even to double or triple the number of stem cells available would expand doctors’ ability to treat children with one donor instead of two. Or to treat adults, if we can expand the populations enough,” says Stephen Ekker, associate professor of genetics, cell biology and development.

Working with zebrafish–a common laboratory model organism–the researchers inactivated over 60 genes, one by one, in fish embryos. Observing the effects of each gene “knockout,” they identified 14 genes that play a role in the development of blood cells from hematopoietic stem cells and determined which step along the road to blood cell production each gene is necessary for.

The next step, says Ekker, is to repeat this experiment with each gene. If incorporating extra copies of a gene into fish embryos boosts blood cell production, the gene will become a candidate for addition to human hematopoietic stem cells. Using this procedure, the researchers hope eventually to enhance blood cell production in the laboratory, not only by coaxing each hematopoietic stem cell to produce lots of mature blood cells but by encouraging the stem cells to replenish their own stocks.

The research fits in perfectly with the mission of the University’s new McGuire Translational Research Facility, which opened officially in June. Work in the facility, which will house the Stem Cell Institute, the College of Pharmacy’s Orphan Drug Center, and the new Center for Infectious Diseases and Microbiology Translational Research, aims to “translate” discoveries about basic biology into treatments for such diseases and conditions as tuberculosis, HIV, malaria, heart disease, Parkinson’s disease, and spinal cord injury. The ability to turn research into recovery will further establish the University of Minnesota as a powerhouse of research on stem cells and other topics.