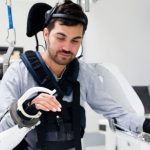 A tetraplegic is one who has suffered partial or total loss of use of all four limbs and torso.

Each year, it is estimated that 250,000 to 500,000 people worldwide suffer a spinal cord injury, and that 59 percent of those living with the injury are tetraplegic—experiencing the total loss of use of all four limbs and torso. Innovative research from Clinatec and the Université Grenoble Alpes (UGA) has resulted in a first for a tetraplegic patient. Using a four-limb exoskeleton controlled by a neuroprosthetic, he was able to walk and use his arms.

“This device is an important step forward in helping people with disabilities become self-sufficient,” said Alim-Louis Benabid, neurosurgeon, UGA professor emeritus, lead research author and Clinatec chair of the board. “We are extremely proud of this proof of concept and are already considering new applications to make everyday life easier for people with severe motor disabilities.”

While the use of exoskeletons may not be entirely new, the addition of a long-term implantable device collection system is a recent advancement that allows for a high-resolution recording of electrical activity in the brain. Brain signals that are triggered when an individual moves are wirelessly transmitted in real time to a computer, which decodes the signals to allow for exoskeleton control without external controls.

The device, WIMAGINE, is implanted into the individual’s cranium through a semi-invasive surgery. The device, which uses 64 electrodes to record electrocorticograms, features electronic boards that allow for data acquisition and digitalization systems. WIMAGINE uses a remote power supply, along with wireless transfer through a radio link, and adheres to safety and biocompatibility standards.

The WIMAGINE implant has electronic boards that wirelessly transmit the data from brain signals that are triggered when a person moves, allowing for control of an exoskeleton. (Image courtesy of Clinatec.)

The data is decoded thanks to the development of artificial intelligence (AI) algorithms and software. The team worked with engineers from CEA-Leti, specialists in smart systems. The exoskeleton’s design incorporates reversible actuation and control-command bricks specifically engineered for patient safety.

The test subject, who is 28 years old, has had the implant for more than two years. Along with completing exercises with the exoskeleton, he also practices in a virtual environment at home and continues working with the research team each month. While wearing the suspended exoskeleton, he has control over his arms in three dimensions, including the ability to move his wrists, and can take multiple steps.

The success of the clinical study has fueled efforts to integrate the technology into additional effectors—providing control over a wheelchair or an articulate arm—and refining the algorithms to be more precise and allow for more movements, such as holding an object. Moving forward, more patients will participate in the trial.

For a more in-depth look at how AI is revolutionizing the medical industry, check out The Role of AI in Medicine.