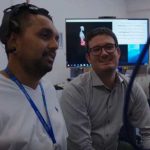 When it comes to developing cutting-edge technology to help people with spinal problems walk again, Dinesh Palipana is uniquely qualified – not only is he a decorated medical researcher, he’s also a quadriplegic.

Dr Palipana was seriously injured in a car crash on Brisbane’s Gateway Bridge in 2010 that robbed him of the use of his legs and left him with limited use of his arms.

However, despite his injuries and tough rehabilitation, he finished his medical degree and has since gone on to become a medical researcher at Griffith University as well as a junior doctor at Gold Coast University Hospital.

He is now working, with his colleague Dr Claudio Pizzolato, to pull together a number of separately developed methods into a therapy that, it’s hoped, will partially reverse a patient’s injury.

“We’re still in the early days of this technology; researchers in the US said we’re at the Model-T Ford stage, and that’s about right,” Dr Palipana said.

“[US researchers] have restored some function, patients can stand unassisted and their bladder and bowel functions have improved.”

The Griffith researchers want to go further than that, and the key is an apparatus called the BioSpine, which is on the edge of current medical science: it reads brain waves and sends electric signals to a patient’s legs, effectively bypassing the damaged spine.

This allows patients to do rehabilitation work such as riding a bike, which would have been impossible otherwise.

Dr Palipana said they had already tested the machine on the perfect candidate: himself.

“I’m the best test subject, so it definitely works – we just have to refine it and make it better,” he said.

“The technology works, and over the last couple of weeks we’ve done a bunch of measurements on myself seeing what muscle activity is there.”

The next step is clinical trials, and that has been made possible thanks to a $2 million grant from the Motor Accident Insurance Commission (MAIC), which regulates the state’s Compulsory Third Party insurance scheme.

“It is therefore important that we support brilliant and dedicated researchers like Dr Palipana and Dr Pizzolato in their ground-breaking research.”

“Claudio and Dinesh represent only a few people in the world able to undertake this R&D.”

Clinical trials are expected to get under way by next year and it’s hoped BioSpine will be commercially available in six to eight years.

The cost of all spinal injuries to the Australia economy is estimated at $2 billion per year, with more than 12,000 people in Australia currently living with some form of serious spinal cord injury.

“People live with these injuries every day and while we’re very good now at keeping people alive, the personal cost is very high,” Dr Palipana said.

“Just to change these lives would be incredible, and I know that firsthand.”

By: Stuart Layt
Stuart Layt covers health, science and technology for the Brisbane Times. He was formerly the Queensland political reporter for AAP.