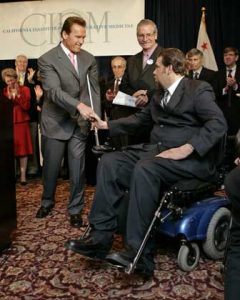 Two lawsuits challenging the state agency’s constitutionality have prevented it from borrowing $3 billion from Wall Street bond markets. The first research grants came from a $150 million loan from the state and another $31 million in loans from philanthropic organizations.

“Today, we are making history,” said Gov. Arnold Schwarzenegger, who authorized the state loan last year and made a brief appearance at the agency’s oversight board meeting.

The Republican governor’s support of stem cell research puts him at odds with the Bush administration, which has limited federal funding to about $25 million annually out of moral opposition.

In response, California voters passed Proposition 71 in 2004 to create the institute and give it authority to borrow and spend $3 billion for the research. Schwarzenegger, who endorsed the ballot measure, said he would approve even more loans from the state if the agency runs out of money before the lawsuits are resolved.

The research aims to use stem cells – created in the first days after conception and giving rise to all the organs and tissues – to replace diseased tissue. But many social conservatives, including President Bush, oppose the work because embryos are destroyed in the process. The microscopic embryos are usually donated by fertility clinics.

Schwarzenegger declined to directly address his split with Bush over stem cells and several other environmental issues such as global warming.

“I’m just interested in our decisions here and not analyzing someone else’s,” Schwarzenegger said. “Eventually it will rub off on Washington.”

Four other states have also skirted federal restrictions with stem cell research funding schemes of their own: Connecticut has a 10-year, $100 million initiative; Illinois spent $10 million last year; Maryland has approved a $15 million budget; and New Jersey has spent about $25 million in two years.

The California agency last year managed to award $14 million in training grants for novice researchers, but the money it handed out Friday was intended to fund more ambitious projects that aim to push stem cell research out of the lab and into patients.

Next month, another round of 25 grants worth about $80 million will go to established stem cell scientists.

Even so, human embryonic stem cell research is still in such a nascent stage that scientists say that few actual treatments for the sick will result within five years.

Stem cell agency officials hope the two lawsuits filed by lawyers connected to anti-abortion groups and tax advocates will be resolved in the next year.

UCI reaped $3.6 million in grants from the stem cell agency.

Here are the grants listed by principal researcher, topic and amount:

Rutgers’ LeGrand has no movement below neck after spinal cord injury

The Desire: A quadriplegic makes a film on his ‘feeling, emotion’