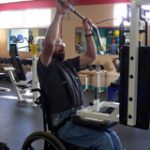 (San Diego’s East County) — “When I first had my stroke, I couldn’t speak or move my right side. I couldn’t walk,” recalled Austin Junkin, 80, of Lemon Grove. “Now I can do anything. I lift 100 pounds with ease,” he said, demonstrating his physical prowess by hoisting weights above his head inside the Challenge Center at Sunset Park in La Mesa.

Challenge Center isn’t any ordinary gym. The facility specializes in helping severely disabled patients, including those with spinal cord and traumatic brain injuries, attain dramatic improvements even after other physical therapy programs have failed. View Video.

“We heal people,” said Bill Bodry, who founded Challenge Center in 1987 after suffering a spinal chord injury from a botched surgical procedure and finding no adequate facility for rehabilitation. “We see the miracles of physical therapy. Our total focus is on the disabled. Others only see these patients for 30 or 60 days,” he noted, adding that many patients can only get insurance to cover six to twelve weeks.

By contrast, licensed physical therapists at Challenge Center will stick with traumatic brain injury patients for two or three years. “They are in wheelchairs and head braces. The prognosis is that they will never walk, talk or speak,” said Bodry, whose facility has produced astonishing results. “The most dramatic we’ve seen are people who were in comas for months. Families were told to take them off life support.”

He recalled the case of a patient named Michael, who suffered severe injuries in a car accident that ripped a vehicle in half, killing others. “He came out of a coma with a look of horror, opened his mouth, and everything was garbled,” Bodry said. “He was in a wheelchair and head brace. He is now walking with a cane and speaks with no impediment. He’s completely alert and he can stand on a chair or bench with his hands in the air. It’s risk taking. We can push the envelope here…We have the known care, and what is possible is applied here.”

Asked how many patients have been injured at the Challenge Center during its 21-year history, Bodry replied, “None.”

Traumatic brain injuries have become the signature injury of the Iraq War, yet the U.S. military and the Veterans Affairs Department have not referred assist wounded active duty military personnel or veterans.

“I have room for 75 people,” said Bodry, who has been in touch with the Wounded Warrior Foundation and Semper Fi. “We’re ready, willing and able. I have $10,000 sitting in the bank in a restricted grant for active duty military or recent veterans.”

Asked why no active duty soldiers or wounded veterans have been referred by the U.S. government to the Challenge Center, Bodry speculated that hesitation is due to “the pride of the military.”

Families can bring wounded vets or others to the facility, which does not accept insurance but charges on a sliding fee scale. Low-income patients with serious disabilities such as spinal cord or traumatic brain injuries, multiple schlerosis, or muscular dystrophy may qualify for scholarship funds provided by major donors including Grossmont Healthcare and Kaiser Permanente.

Rob Constantine, a San Diego-based videographer with cerebral palsy, has been coming to the Challenge Center since 2003. “The help has been enormous,” he said. “The older I get, the faster my muscles tighten up. I had more falls and I hurt myself before coming here…The Challenge Center is like an amazing center. It’s like a health club, but it’s also like the Cheers Bar. You come in and everybody knows your name; it’s a social experience—and almost everyone here is disabled.”

Constantine recently produced a video on the Challenge Center which can be viewed at www.myrcvideo.com.

Another former client, Jeannie Booth Rex, lost a leg after a drunk driver struck her and dragged her across a grocery store parking lot. Today, she is an employee at the center.

Bodry, who is confined to a wheelchair, went to Nevada seeking help after he realized he was growing weaker following his own injury. The result was a “disaster,” he recalled. “The people running the facility were not professionals. People were injured in the program every day. The worst I saw was a young man 16 years old, a quadriplegic. He got on a range mat and started stretching himself, pushing down like an NFL player. He broke his own femur…I will never forget that sound.”

Bodry later went to Los Angeles and checked into a program in Arizona started by the mother of a child with an injured spinal cord. “It was a carbon copy of the other place,” he recalled, adding that he came to a realization that “to find anything beyond acute care, I’m going to have to start it.”

He started a nonprofit organization and invited a doctor heading up rehabilitation at Santa Monica Hospital to serve on the board. “He took me to a world authority on physical medicine and rehabilitation,” recalled Bodry, who opened the first Challenge Center in El Cajon in 1987. In 2000, La Mesa Mayor Art Madrid helped Bodry move his facility to the Sunset Park site at a very affordable rate.

Bodry has emerged as a passionate advocate for the disabled and the importance of physical activity.

“Lack of physical activity is the tenth leading cause of death and disability in the U.S., and the National Institute of Health (NIH) has no department of physical activity,” said Bodry, who has testified at the NIH, piquing the interests of national leaders in healthcare.

In May, he will team up with the Old Mission Rotary Club to host a fiesta aimed at raising funds to purchase all new equipment in the aging facility. “It will put us on the map,” he predicted, adding that doctors and therapists would be more apt to refer patients to a facility with state-of-the-art gear.

Bodry’s dream is to see the program he founded at the Challenge Center replicated across the country. “That is my goal,” he revealed, then concluded, “With the new administration, I am hopeful.”

Story and photos by Miriam Raftery; videos by Leon Thompson and Rob Constantine.

New wheels at St. Mary’s makes getting around easier