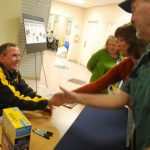 As head of the University of Pittsburgh’s Human Engineering Research Laboratory, Rory Cooper is helping to guide emerging technologies and treatments to improve mobility for people with physical disabilities.

But for Cooper, who suffered a spinal cord injury in 1980 while serving in the Army in Germany, inspiring others to see past their disabilities can be as rewarding as the latest medical advancement.

A participant in the 28th National Veterans Wheelchair Games last summer, Cooper is one of 12 medal winners selected to appear on a special edition Cheerios cereal box. He has participated in 25 Wheelchair Games since his accident.

“The Wheelchair Games are one of the best things ever created,” said Cooper, who earned four gold medals for swimming and a silver in the slalom last year in Omaha, Neb.

“They are critical to rehabilitation and healing, and I’m honored to promote a positive image for our wounded, injured and ill veterans,” he said.

Cooper sustained near-fatal injuries when he was sideswiped by a bus and then run over by a truck while bicycling.

“I think he is a phenomenal example of what people can do if they have the will,” said John Vinosky, 74, of Boswell, Somerset County, after meeting Cooper at the Oakland VA. Vinosky, an Army veteran, was undergoing chemotherapy.

A competitive runner in the Army, Cooper, a sergeant, was preparing for the 1980 U.S. Olympic trials at the time of his accident.

“Because I was so fit, my recovery was fairly quick considering the extent of the injuries,” he said. “When I returned home (to California), I got involved in wheelchair basketball and eventually the Wheelchair Games.”

Cooper credits the members of his military unit and his wife, Rosemarie, whom he was dating at the time, for providing the support he needed to recover.

A lack of wheelchairs that could be used in athletic competition prompted Cooper, who was studying engineering at California Polytechnic State University, to begin designing high-performance equipment in the machine shop his mother owned.

“I toyed with starting my own wheelchair company, but then, when I was in graduate school, a faculty member introduced me to bioengineering,” Cooper said. “He told me, ‘if anybody can make a contribution to this field, you can.'”

Cooper earned a doctorate in electrical and computer engineering with a concentration in bioengineering from the University of California at Santa Barbara in 1989. In 1994, he was recruited to work at Pitt’s School of Health & Rehabilitative Sciences.

Cooper, a resident of West Deer, has won numerous academic awards and written extensively about injury rehabilitation and bioengineering. He has 10 patents awarded or pending.

“Dr. Cooper leads by example with his commitment to helping his fellow veterans through his work and his participation in the Wheelchair Games,” said David Uchic, a spokesman for Paralyzed Veterans of America, whose organization sponsors the games.