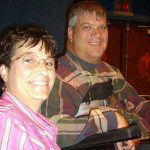 ST. BENEDICT – Ken Lantzy believes in making the best of situations and follows his own advice.

When a high school football injury caused permanent quadriplegia for him decades ago, Lantzy’s positive attitude became an unfaltering beacon of inspiration to his family, friends, community and scores of area youth.

“The accident happened in October 1970 during a home game between Cambria Heights and Windber high schools. I was a 16-year-old defensive back going for a sweep, and as I made the tackle, my helmet hit the opponent’s thigh. Something ‘clicked’ in my head; and after the hit, I lay on the ground and couldn’t move. When my trainer ran over, I saw his eyes were huge and I knew my injury was not good,” Lantzy said.

Lantzy never lost consciousness, and at the hospital, his courage comforted his shaken family as they awaited news on the seriousness of his injury. The news was not encouraging. His C5 spinal cord injury would allow independent breathing with head, neck and limited shoulder movement, but it also caused complete paralysis of his arms and legs.

“The injury definitely changed my life,” Lantzy said. “I wanted to play college football and had been considering engineering as my major.”

Diana Sharbaugh vividly recalls visiting Lantzy in the emergency room as he lay on the hospital gurney and the despair she felt at the extent of her young cousin’s injury.

“I felt upset, hurt and angry that this could happen to Ken, an excellent athlete and scholar. But his positive attitude that night tempered my distraught emotions and opened my eyes to see the depth of his profound courage. He accepted the situation and focused on living,” Sharbaugh said.

“The event provides an opportunity for the kids to get a taste of college competition. It also supports academic scholarships and worthwhile charities like spinal cord injury, breast cancer, multiple sclerosis and spina bifida research,” Lantzy said.

Although Lantzy’s injury requires him to use a wheelchair, he continued to live life and do things that interested him. He earned a degree in secondary education from St. Francis University in Loretto and chose a career in sales, using his teaching skills in a volunteer capacity rather than a classroom.

“Volunteering has been a big part of my life,” Lantzy said. “Coaching Little League and fifth-grade basketball for the past 15 years has brought great satisfaction to my life. Though at first people were not sure I could coach from a wheelchair, I proved I could handle it.”

Despite physical limitations, Lantzy has been able to achieve his goals and overcome obstacles by drawing on natural strengths, including a quick wit and sharp mind.

Sharbaugh remembers how Lantzy’s mental talents were evident at an early age.

“When we were little, our grandfather would practice games with Ken and I that required us to use and strengthen our minds in place of pencil and paper. Ken has a very sharp mind and would remain focused and determined during the mental quizzes,” she said.

Several years ago, Lantzy got a computer and learned to play bridge online with assistance from a woman in Marquette, Mich. The couple initially became bridge partners, but romance soon blossomed. They married in 2002.

In December, Lantzy and his wife, Monica, moved into their new home which Lantzy designed and had built to his needs and specifications.

“Living in a wheelchair has its difficulties, and I have needed to accept help from family and friends. But I have tried to live as normal and full a life as possible,” Lantzy said. “You just have to think positive and keep on living.”

By Margaret Rudolph, For the Mirror