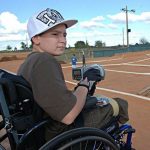 Eleven-year-old Joey Gibbs knew he was paralyzed following a motocross jump mishap. The accident occurred at 5:42 p.m. on Sept. 18, 2008.

“I landed wrong, and it catapulted me into another jump,” Joey said, describing the double-jump accident. “I knew right off the bat I was paralyzed. I tried to move my feet. It felt weird. I felt tingling.”

Still lying on the track, he said two things to his dad, Matt, who had raced to his son’s side.

“I knew not to move him,” Matt Gibbs said. “I grabbed his inner thigh and squeezed hard to check the extent of the injuries.”

Doctors determined Joey was paralyzed from the waist down.

He spent 10 days at Shands at the University of Florida and another 30 days at Brooks Rehabilitation Hospital, a brain and spinal cord injury treatment center for children and adults in Jacksonville.

Joey’s mother, Sheila, and Joey’s two brothers and three sisters, ranging in age from 12 to 23, prepared for what Matt Gibbs called “a new normal.”

A team of local contractors headed by Currington Contracting made major modifications to the Gibbs’ home, including a wheelchair ramp, handicap-accessible shower and room enlargements. Even a built-in aquarium was part of the donated work.

After unaccustomed missed work and changes of schedule, the family has adjusted their routine and assists Joey as necessary, but Joey is a model of self-determination.

“We’ve learned a lot,” Matt Gibbs said. “I can toss him his clothes, and he gets dressed and in the chair. He is working on transferring into the car himself.”

Joey’s brother Robby,19, sees his brother – not the injury.

“Just because he’s in a chair doesn’t mean he’s any different,” Robby said.

Joey faces each new challenge with courage and determination.

“I’ll learn it like I learned motocross,” he said about his life now.

“I have no problem being paralyzed. My mom is a little crazy, but she’s still my mom,” he said jokingly.

“Having Joey here is an inspiration. We want to make a smooth transition for him,” said Saundra McCallister, administrator of First Assembly Christian School in Ocala.

Joey enjoys competing with radio-controlled cars and recently raced and jumped the models while with his sister Christin, 14, and family friends Alec Lopez and Hannah DeCastro.

He recently traveled to the Shriners’ Hospital in Philadelphia where, using parallel bars, he stood under his own power for the first time since the accident.

“It’s hard, but I’ll get it,” he said, describing the activity on the parallel bars and with braces.

His positive attitude and physical strength qualified him for a special brace program, and he will return to the Shriners’ facility soon to be fitted. The accompanying therapy takes about two weeks, Matt Gibbs said.

Joey’s father said he was told the braces alone cost “thousands and thousands.” It is not known at present what expenses will be covered by insurance.

“We’re in a war with insurance,” Matt Gibbs said, “I spend hours on the phone. In the world of spinal cord injuries, there’s no protocol. One hospital may treat it a certain way, and others differently.”

Despite the challenges, the family is confident Joey will become mobile again.

“The smile on his face” convinced me, Matt Gibbs said.

MARS® Drink gets spinally injured teenagers back on track