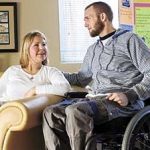 On a Sunday in August, Mike Phillips’ world came tumbling to the ground. While on a walk at Riverside Park near his Lexington home, Phillips climbed a tree, not an unusual occurrence for the agile 32-year-old.

“I’ve climbed a bunch of trees in the park,” he said. “It started pouring down rain, and I came down a little too fast and slipped.”

He fell 40 feet and broke his back, severely damaging his spinal cord. He is now paralyzed from the chest down.

“They pretty much told me I’d never walk again,” Phillips said recently from his wheelchair.

He and his wife, Sarah, aren’t accepting that prognosis. After extensive research, they’ve decided they will travel to Monterey, Mexico, where a doctor will inject umbilical cord stem cells at the site of Mike’s spinal cord injury. Dr. Alfredo Estrada, the doctor in Mexico, told them Mike could get 80 percent of his mobility back and should see results within four months. The $23,000 cost is not covered by their health insurance.

“Honestly, I wasn’t looking for this at the beginning,” said Sarah, 31. “First I just wanted support of any kind for help.”

She started with the Web site for Christopher Reeve, the late “Superman” actor who was completely paralyzed by an equestrian accident in 1995 and became an advocate for medical research of spinal injuries.

The earliest opening at the clinic is February. The couple knows there are skeptics about Estrada’s procedure and its success. (A spokesman from OHSU’s neurological department was unavailable for interview due to inclement weather).

“I’m still doing research, talking to patients,” said Sarah, who enrolled in the nursing program at Lower Columbia College just before the accident. “It’s really hard to know. You do research and more research. You just keep looking, keep asking, keep trying. There’s no guarantee, but you have to believe and to take a chance.”

The stem cell operation isn’t their only plan of attack to get Mike well. Two months ago, he started physical therapy sessions at Adapt Advance in Beaverton, Ore., on a recommendation from Legacy Good Samaritan Hospital, one of two Portland hospitals he was in for 2 1/2 months after his accident. He goes twice a week for two-hour sessions that cost $100 per hour and aren’t covered by their insurance.

“They do specialized work with quadriplegics and paraplegics,” he said. “They got me rolling on the floor. They put me on a bike that shocks my legs at the muscles that I would be using if I was riding it for real.”

“They push you to your maximum; he’s pushing and sweating like crazy,” Sarah added. “They want him out of that chair, to learn how to make those muscles ‘talk’ again.”

Though Mike is paralyzed, it doesn’t mean he can’t move his legs — he just has no control over their movement.

“He has more function than feel,” Sarah said. “He has a lot of muscle spasms, and that’s a good sign.”

“You use the spasms to your advantage,” Mike said. “I can hit certain parts of my body and my leg will move. If Sarah lifts my toes, my knee moves. There’s a signal there, it’s just confused.”

The lure of adventure

Mike and Sarah met in Seattle when her boss introduced her to “the new guy” who had started working at the truck parts company while she was on vacation. They’ve been married for eight years and have two children, Ryder, 7 and Brynn, 5.

This is not the first time the couple has had to face tragedy. Both their children were born prematurely, weighing just 2 pounds at birth; each had a twin that died.

Before the accident Mike worked for Asplundh, a company that trims or removes trees. He’d been at the job since he and Sarah moved to Lexington five years ago to be near her family.

“I loved it. I worked here in the county and I was close to home,” he said. “It was a great job.”

He also had 13 years as a whitewater rafting river guide. He’s got a photo of himself churning down a 10-foot waterfall in Class 5 rapids on the White Salmon River. Rafting and kayaking are what he’s missing the most.

“That was our life, lots of camping,” he said. “Every summer I’d be rafting every weekend and get everybody on the river.”

He’s set a goal to return to the waterways, no matter what the outcome of his Mexican operation.

“What I’m planning on doing is to get a raft with a center frame, and you have a seat in the middle,” he said. “I’ll construct a back and sides to give me balance, and I should be able to go on the river in Class 1 and 3 rapids.”

A fire heats their cozy living room on a recent snowy day. They apologize the house is so hot.

“The worse thing is getting up in the morning and being cold and achy,” Mike said.

He admits the first month home in November was hard. “ Getting used to everything around here, being on my own during the day, taking medications,” he said. “But I’m getting used to it. I can get around really pretty good. I can transfer pretty good.”

While Sarah sits in an overstuffed chair, Mike rolls his wheelchair close to her. They often stroke and hold each other’s hands during conversation.

Along with the support of family and friends, they said they both have a belief in a higher power. “We’re stronger than a lot of people,” Sarah said. “I’d hate for this to happen to anyone who wasn’t as strong as we are.”

They don’t see the operation in Mexico as a last hope.

“People say, ‘What if it doesn’t work and you’ve paid all that money?’” she said. “It’s not that big of an amount of money if you could get any ability back at all.”

Mike is willing to take the chance for one simple reason.

“My biggest goal is to hold hands with Sarah and walk down the beach with her again some day.”

• Applebee’s restaurant will hold a pancake feed from 8 to 10 a.m. Saturday, Jan. 24. Tickets are $10 and available at the two Smiles Dental locations

• The family is seeking donations of items to sell on eBay. Donated items can be dropped off at Farmer’s Insurance, 1556 Third Ave., Longview

A world running for a chance to walk again