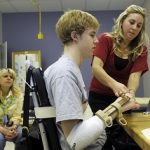 Ann Arbor — Derek Zike and his family do not shy from stating the truth.

But normal is a subjective term.

Derek, 17, is working out his version, trying to create a world as close to the one he knew before the evening of Jan. 16, when he suffered a spinal cord injury and was paralyzed while playing in a hockey tournament at the Ice Cube in Ann Arbor.

He has spent the past 12 weeks in the University of Michigan’s C.S. Mott Children’s Hospital, recovering from surgeries and in rehabilitation.

The news is good. He was discharged Wednesday afternoon and headed home to suburban Indianapolis to begin the next phase of his recovery — and the rest of his life.

“I don’t know how to put into words everything I’ve been through, other than to say it’s been tough, but I think I am tougher,” Derek said. “I was a mature kid before, so in a weird way, I was prepared to handle something like this. I don’t know. I just take one day at a time and fight to get better.

“I really believe I will walk again. I am not giving up.”

“We have been through an unimaginable journey,” she says. “This has changed everything for us. This is the new normal for us. Derek has come so far, I can now imagine a good life for him again.

“So many things went away when it happened, our hope was crushed. But that was only for a bit. Our hope and faith came back and now are totally strong.”
Hope and pain

Derek can use his arms, hands and parts of his fingers, allowing him to operate his wheelchair, eat, draw and work a computer. Sensation is returning to his legs, bringing a “burning” feeling to his quads and hamstrings.

He can move his toes on command. The line of paralysis has moved down five levels, from under his armpit to below the last rib, an important clue his spinal cord is slowly repairing itself.

Derek has gone from being in intensive care, wracked with pain and locked in a neck brace, to sitting up unassisted in a wheelchair with mobility.

He has not needed pain medication in days. All good signs.

“A spinal cord injury is very traumatic, but his mind and strong personality have helped him through things,” said Dr. Elite Ben-Ozur, one of the Mott physicians on Derek’s team. “He’s been on a very long journey. It’s only been three months, but I see him being back to being a normal, 17-year-old boy who is recovering well. He’s himself again.”

Derek has grown three inches since the accident, to 6-foot.

His dry, sarcastic teen sense of humor has returned with his strength, evidenced by his observation that he’s 6-foot tall, but only really 4-11 in his wheelchair — which elicited a horrified mom look from Robin.
Homecoming

The Zikes made their first journey home as a family Wednesday afternoon, a trip that took a lot of planning and care. Mike Zike, Derek’s dad, remodeled the family’s home in Fishers, Ind., with the help of friends, volunteers and former teachers, to make it wheelchair-accessible.

A first-floor bedroom and bathroom suite have been created for Derek.

He will undergo daily physical and occupational therapy sessions at home, and will return to high school. He also plans to take driver’s education again, learning how to drive with hand controls on a specially-equipped car.

“It’s going to be a little weird, being back home, but I’m ready,” he said. “I’m done with the hospital and all this. I will be happy to see everybody.”

Robin said he’s not sure how everything will go, but she has faith.

“We’ve had to learn and change a lot over the last 12 weeks to figure all of this out,” Robin said. “We’re going to do what we do through all of this: be strong as a family and pray. Lots of prayers. They work. They have so far.”