Cyborg-type exoskeleton for use after strokes, spinal cord injuries 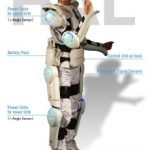 A Japanese company has created a robotic exoskeleton that is designed to help make disabled people mobile again, enabling them to stand up, walk and even climb stairs.

Cyberdyne Inc. has built what it calls Robot Suit HAL (Hybrid Assistive Limb) — cyborg-type robotic suit. The exoskeleton, which is worn much like the suit in the movie Iron Man, is built to be used in medical rehabilitation or to help people who have suffered a stroke or spinal cord injury, for example, become mobile again. It also could be used for people doing physically demanding work in factories or at disaster sites, according to the company.

HAL reportedly can make a wearer two to 10 times stronger than he normally is.

According to Cyberdyne, HAL is only available in Japan today, but the company is also hoping to make it available in Europe. The company did not say when it could be available in the U.S. or disclose its price tag.

In an online statement, the five-year-old research-and-development company said that the exoskeleton is designed to capture human nerve signals that are sent from the brain to the muscles. The signals, even weak ones, are caught in a sensor attached on the skin of the person wearing the suit. The signals then control the movements of the joints in the suit.

“This is what we call a ‘voluntary control system’ that provides movement interpreting the wearer’s intention from the biosignals in advance of the actual movement,” the company said in a release. “HAL is the world’s first cyborg-type robot controlled by this unique hybrid system.”

Since the exoskeleton supports its own weight, Cyberdyne reports that the suit does not feel heavy to its user.

Last October, researchers at the University of Washington announced that they are working to reroute brain signals in an effort to give paralyzed people the ability to move their limbs again. Scientists say they are restoring voluntary movement to the once-paralyzed limbs by creating an artificial connection between muscles and the brain’s nerve cells.

Less than a year ago, a scientist at the University of Arizona announced that he had successfully connected a moth’s brain to a robot. Charles Higgins, an associate professor at the university, told Computerworld last year that the research will lead to hybrid computers running both technology and living organic tissue. He also said that the hybrid systems could be used to make people with spinal cord injuries mobile again.

And in January, an international group of scientists successfully used a monkey’s brain activity to control a humanoid robot. Miguel Nicolelis, a professor of neurobiology at Duke University and lead researcher on the project, said at the time that the research may only be a few years away from helping paralyzed people walk again by enabling them to use their thoughts to control exoskeletons attached to their bodies.

You can’t slow Annie Hayes down