It seems tragic, but he says it’s a challenge 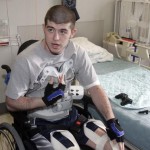 It’s not for practice. It’s for healing.

And it’s not on a field or in the backyard. It’s at the Van Matre Rehabilitation Center on Mulford Road.

“You don’t have to whip it at me, geez,” Barry said jokingly to his father, Barry Glaudel Sr., during a rehabilitation exercise last week. Young Barry, a lefty, threw the football back harder to his dad with a grin.

When Barry’s father tossed the ball back a few inches too high, the younger Barry couldn’t jump to catch it.

Instead, Barry laughed as it deflected off his finger tips and softly hit his physical therapist on the head.

“His attitude makes a huge difference,” said Gemma Fletcher, Barry’s physical therapist at Van Matre. “He’s an inspiration for everyone.”

Once a standout in football and wrestling, Glaudel is paralyzed from the waist down. An automobile accident last month damaged his spinal cord, and doctors tell him he’ll never walk again. But Glaudel is recovering more rapidly than anyone predicted, a testament to the power of the mind and spirit.

“It’s just my normal attitude,” Barry said. “I push myself. I’ve always pushed myself through things. I’ve never been one of those people that just quits. You know, you’ve just got to keep going.”

Glaudel grew up in Stillman Valley with his parents, Barry and Cyndi Glaudel, and older sister Nicole, 20. He started wrestling when he was 4, with his father as his coach.

A popular student, Glaudel was the starting center as a junior and senior and snapped almost every ball during last year’s 9-2 season. He was also a two-time state qualifier in wrestling and helped the Cardinals earn their first team state wrestling trophies, finishing second in 2008 and third last season.

“He was a great leader by example who worked extremely hard,” Stillman Valley football coach Mike Lalor said. “And he always did it with kind of a little smile on his face, too.”

The accident happened three weeks after his last wrestling match, when Glaudel was in the best shape of his life. On March 22, he drove himself and three friends to Nash Recreation Center in Oregon to go swimming.

On his way home that Sunday afternoon, his Ford Explorer Sport came up over a small hill on the 5000 block of Cox Road, about five miles from his home. Barry was going about 40 mph when he noticed an oncoming car driving in the middle of the street.

Both drivers swerved and avoided a collision. The other car drove away, but a rattled Barry overcorrected when he steered his car back to the road. It hit a patch of gravel, spun and rolled twice.

His three friends — Jake Hicks, Steven Reick and Jake Belter — were fine. The two riding in the backseat ended up in the back of the Explorer, but suffered only bumps and bruises.

But Barry, who wasn’t wearing a seat belt, was tossed from the car as it rolled.

“I remember all of it, which isn’t necessarily a good thing,” Barry said. “It’s pretty painful to think about. Getting thrown out of the car as it’s rolling, and the top of the car being smashed down into my back didn’t feel the greatest.

“I remember everything until my face hit the ground as the car was coming around over the top of me.”

Barry and his family said that getting thrown from the car may have actually saved his life.

Photos after the accident show the metal trim from the window frame stabbed into the back of the driver’s seat, and the roof above the driver’s seat was pushed down hard enough to flatten the top of the steering wheel.

“One of the things that we can’t wrap our minds around is how his 6-foot body got out the window,” Barry Sr. said. “Cyn and I feel that an angel pulled him out of that vehicle. Both of us feel very, very blessed. As bad as it is, it could have been so much worse.”

When Barry regained consciousness, Hicks was standing over him asking if he was all right.

After a 911 call, a helicopter rushed Barry to Rockford Memorial. Doctors discovered his thoracic vertebrae No. 9 (T9) had shattered. That damaged his spinal cord and lining and rendered him paralyzed from the middle of his stomach down.

Dr. Todd Alexander performed a three-hour surgery that evening. He inserted two metal rods in Glaudel’s back to fuse T7 to Y11, and built a cage around his spinal cord to stabilize it.

Glaudel also suffered a fracture in his neck and two gashes, but they were minor compared with his spinal injury.

“The doctor told us he had a complete spinal cord injury, which means he will never walk again,” said Barry’s mother, her voice cracking as her thoughts trailed off.

“But the doctor said he didn’t want to paint a bleak picture,” Barry Sr. continued, “because we see miracles happen all the time.”

After just three days at the hospital, Barry was released to Van Matre to begin rehabilitation.

Within two weeks, he was working with Fletcher on things such as push-ups, balancing on a large stability ball and throwing a football.

Every day he does something he couldn’t do the previous day.

“I’ve been working pretty hard,” Barry said with a half smile, proud of what he’s accomplished. “It’s like an all-day-long wrestling practice. It’s going to be one day or another that I’m going to have to learn to do this stuff, I figure I might as well learn it now.”

He’s still a normal teenager. Visitors might see him balancing his chair on one wheel with one hand while texting a friend with his other. He spends most of his time in his room with his PlayStation 3. He said he was never any good at it until now.

He is starting to have movement again in his lower abs. He jokes that he has his six-pack back after only having a four-pack since the accident.

“Everyone’s been amazed at how well he’s handled it,” said Lalor, who along with the rest of the school and community, has paid countless visits to Barry at Van Matre.

“He’s been an inspiration for everybody to watch. I know he’s had his bad days, but for the most part, he’s not only accepted it, he’s embraced it.”

He’s had massive support from the community from the start. On the day of his accident, more than 100 supporters waited in ICU during his surgery.

Among his visitors were coaches from Aurora University. Glaudel committed to play football for the Division III school before the accident, and the coaches said they still want him on the team in some aspect. He will not lose his academic scholarship to Aurora.

A huge outdoorsman, Barry wants to be a conservation policeman.

“I don’t think this is going to deter him from what he wants to do,” Barry Sr. said. “He’s the strongest person I’ve ever known.”

Barry’s first goal will be accomplished this weekend when he moves home. His next goals include attending prom and graduating with his class.

“We have our talks late at night in his room,” Barry Sr. said. “I told him, you might not be able to walk anymore, but now you can soar.

“It’s change, and life is about change. Obviously, this wasn’t our plan for Barry at this age. But it’s very apparent to us that there’s a much larger plan here.”

Joel Hicks, the father of Barry’s friend, Jake Hicks, who was in the accident, is leading a construction project to prepare the Glaudel’s home to be more accessible for Barry when he returns.

The community also is holding a fundraiser for the family Sunday to help pay for medical expenses. The Glaudels don’t know yet how much everything is going to cost, but the helicopter ride alone was $7,700.

“But thank God it was there,” Cyndi said.

“Everyone has been so wonderful. It’s been very humbling. I don’t think he realizes how many lives he’s touched.”

Barry is starting to feel tingling in his legs and has even taken steps using a walker and leg braces. He knows the odds are against him ever walking again, but he’s not giving up.

Some might see it as a tragedy. Barry sees it as a challenge.

“I’ll learn to do things without walking. I’ll still live a full life.

“There’s not much you can stop me from doing, either way, if I put my mind to it.”

The pig roast will be from 1 to 7 p.m. at the high school. A silent auction, a raffle and a dunk tank are among the events scheduled. Tickets for the dinner are $10 for adults and $5 for children.

Spinal injury hasn’t held him back from life