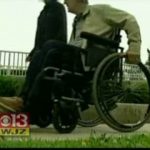 Those with spinal cord injuries, who have multiple sclerosis, or who’ve suffered a stroke are also often diagnosed with central pain syndrome.

It’s a harsh reality for people with debilitating conditions like spinal cord injury or stroke.

Many of them live with chronic, excruciating pain.

Kellye Lynn reports research is underway in Baltimore which could someday end the suffering for patients with central pain syndrome.

Patients who have the condition say it feels like being stabbed with a thousand burning knives.

Arthur Culiner wound up in a wheelchair seven years ago after falling off a ladder.

Since then he’s lived with terrible, tormenting pain.

“Well the most intense pain is around my waist and the best way I can describe it to you is the worst suburn you could ever think of,” he says.

Dr. Asaf Keller of the University of Maryland School of Medicine says what patients feel is often, “Burning or pressing pain. It can be anywhere in the body, or it can be below or above the site of injury.”

“Nothing will stop the pain. There’s nothing I can swallow or put on it,” adds Culiner.

Although there are no effective drugs or treatments for central pain syndrome, researchers at the University of Maryland School of Medicine have uncovered crucial information about the condition.

An area of the brain called The Zona Incerta appears to experience a gradual loss of activity in patients with a spinal cord injury or other disorders.

When this part of the brain malfunctions, too many pain signals reach other parts of the brain causing the burning discomfort.

“Now that we have identified a potential mechanism, we can begin to target therapies in this abnormality in brain function,” adds Keller.

Treatments that could prevent changes in the brain associated with the condition stopping the pain and making life bearable for people like Arthur.

“I hope it works. I hope it’s successful. I’d like the help if I could,” adds Culiner.

An epilepsy drug is also being studied as a potential treatment for central pain syndrome.