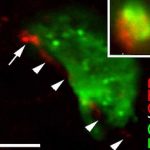 In a major step in spinal cord injury research, scientists at the University of California, San Diego School of Medicine have demonstrated that regenerating axons can be guided to their correct targets and re-form connections after spinal cord injury. Their findings will be published in the advance online edition of the journal Nature Neuroscience on August 2.

In the last few years, researchers have shown that the severed wires of the spinal cord, called axons, can be induced to regenerate into and beyond sites of experimental spinal cord injury. But a key question has been how these regenerating axons, on reaching the end of an injury site, can be guided to a correct cell target when faced with millions of potential targets. Further, can regenerating axons form functional, electrical connections called synapses?

“The ability to guide regenerating axons to a correct target after spinal cord injury has always been a point of crucial importance in contemplating translation of regeneration therapies to humans,” said senior author Mark Tuszynski, MD, PhD, professor of neurosciences and director of the Center for Neural Repair at UC San Diego, and neurologist at the Veterans Affairs San Diego Health System. “While our findings are very encouraging in this respect, they also highlight the complexity of restoring function in the injured spinal cord.”

The UC San Diego study looked at regenerating sensory axons in rat models of spinal cord injury. Sensory systems of the body send axons – long, slender projections of the neuron – into the spinal cord to convey information regarding touch, position, and pain. Many sensory axons are covered by an insulating myelin sheath which helps these impulses travel efficiently to the brain.

In certain spinal cord injuries, the axons are severed and the myelin sheath damaged. Loss of these systems results in an inability to feel or sense the body. The axons can no longer link to their targets in the brain, which blocks the electrical impulses from reaching the central nervous system.

The UC San Diego scientists showed that regenerating axons can be guided to correct targets using a type of chemical hormone called a growth factor. The team utilized a type of chemical hormone, a nervous system growth factor called neurotrophin-3 (NT-3), to guide regenerating sensory axons to the appropriate target and support synapse formation. Regeneration required two other treatments at the same time: placing a cell bridge in the spinal cord injury site to support axon growth, and a “conditioning” stimulus to the injured neuron that turned on regeneration genes for new growth.

Using high-resolution imaging systems, the scientists showed that regenerating axons guided to the correct cell formed synapses that were precisely on target. These axons contained rounded vesicles – small packets at the end of the axon, packed with the chemical messengers needed to support electrical activity in the newly formed circuit.

Nonetheless, the connections were not electrically active. Additional study revealed the likely reason for this: the regenerating axons were not covered in myelin, the insulating material of the nervous system.

“Restoring axonal circuitry is complex, requiring several concurrent therapies to achieve axonal regeneration into and beyond a spinal cord lesion site,” said Tuszynski. “But, just as an electrical circuit needs insulation so it doesn’t short-circuit, it appears that these regenerating axons require restoration of the myelin sheath to ultimately restore function.” This will be the next step in the team’s research.

The lead author of the Nature Neuroscience study is Laura Taylor Alto of UCSD’s Department of Neurosciences. Additional contributors include Leif A. Havton of UCLA, and James M. Conner, Edmund R. Hollis II and Armin Blesch of UCSD Department of Neurosciences. Their work was supported by the National Institutes of Health, the Veterans Administration, the International Spinal Research Trust, Wings for Life, the Dr. Miriam and Sheldon G. Adelson Medical Research Foundation, and the Bernard and Anne Spitzer Charitable Trust.

A Quadriplegic Woman Used Her Mind To Move This Robotic Limb...