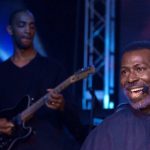 Teddy Pendergrass , an R&B singer who was one of the most electric and successful figures in music until a car crash 28 years ago left him in a wheelchair, died Wednesday in suburban Philadelphia of colon cancer. He was 59.

Before the crash, Pendergrass established a new era of R&B with an explosive, raw voice that symbolized masculinity, passion and the joys and sorrow of romance in songs such as “Close the Door,” “It Don’t Hurt Now,” “Love T.K.O.” and other hits that have since become classics. He was an international superstar and sex symbol. His career was at its apex — and still climbing.

Friend and longtime collaborator Kenny Gamble of the renowned production duo Gamble & Huff teamed with Pendergrass on his biggest hits and recalled how the singer was even working on a movie.

“He had about 10 platinum albums in a row, so he was a very, very successful recording artist and as a performing artist,” Gamble said Thursday. “He had a tremendous career ahead of him, and the accident sort of got in the way of many of those plans.”

Pendergrass, who was born in Philadelphia in 1950, suffered a spinal cord injury in a 1982 car accident that left him paralyzed from the waist down — still able to sing but without his signature power. The image of the strong, virile lover was replaced with one that drew sympathy. But instead of becoming bitter or depressed, Pendergrass created a new identity — that as a role model, Gamble said.

“He never showed me that he was angry at all about his accident,” Gamble said. “In fact, he was very courageous.”

Pendergrass left a remarkable imprint on the music world as he ushered in a new era in R&B with his fiery, sensual and forceful brand of soul and his ladies’ man image, burnished by his strikingly handsome looks.

Gamble said Pendergrass was one of a kind as an artist and boasted a powerful voice and “a great magnetism.”

“He was a great baritone singer, and he had a real smooth sound, but he had a real rough sound, too, when he wanted to exert power in his voice,” he said.

But it wasn’t Pendergrass’ voice that got him his break in the music business — it was his drum playing abilities. He met Harold Melvin, who was looking for replacement members for his group, the Blue Notes, and signed on to be the drummer. Later, he became the lead singer of the group, which became known as Harold Melvin and the Blue Notes.

The band started working with Gamble and Leon Huff and had signature hits in the early 1970s with “Wake Up Everybody” and “If You Don’t Know Me by Now.”

But Pendergrass had creative differences with Melvin and soon left for a solo career, according to his Web site.

It was then he would become a sex symbol for the R&B genre, working women into a frenzy with hits such as “Only You” and concerts dedicated for ladies only.

Unlike the songs of many of today’s male R&B crooners, Pendergrass’ music bordered on eroticism without explicit lyrics or coarse language — just through the raw emotion in his voice.

“Turn Off the Lights” was a tune that perhaps best represented his many moods — tender and coaxing yet strong as the song reaches its climax.

Fans were devastated when, at age 31, Pendergrass was critically injured after his Rolls-Royce hit a tree. He spent six months in a hospital and returned to recording the next year with the album “Love Language.” He continued to sing and recorded several albums, receiving Grammy nominations.

It was 19 years before Pendergrass resumed performing at his own concerts. He made his return on Memorial Day weekend in 2001, with two sold-out shows in Atlantic City, N.J.

After the accident, he dedicated much of his life to helping others with spinal cord injuries and founded the Teddy Pendergrass Alliance to do just that.

Dennis Stock, a celebrated photographer who helped immortalize Hollywood stars such as James Dean, captured the tension and mood of jazz musicians in their smoky habitat, and cataloged the rebellious 1960s counterculture of bikers and hippies, died Monday at his home in Sarasota, Fla. He was 81.

Working to create an “articulate image,” Stock once said he wanted his photos to portray “an attitude of childlike discovery into adult existence.” He published dozens of books and had exhibitions in the world’s prestigious art galleries, including the International Center of Photography in New York, the National Gallery of Art in Washington, the Musee d’Art Moderne in Paris and the Schirn Kunsthalle in Frankfurt.

Early in his career, he was Magnum’s representative in Hollywood and specialized in trying to find unguarded moments in the lives of actors and artists who were used to the careful orchestration of publicity.

He caught trumpeter Louis Armstrong back stage at a concert in his underwear, actor Marlon Brando relaxing in his Napoleon wardrobe on the set of “Desiree” (1954), actress Audrey Hepburn in a moment of reflection as she stares out a car window, and actor James Dean looking into the camera while laying in a coffin, as if trying it on for size.

His relationship with Dean inspired some of his most enduring work.

In 1955, he accompanied the actor on a road trip back to his hometown in Fairmount, Ind., and took pictures of Dean standing in a pigsty, posing in front of a tractor, eating at his family’s dinner table, and sitting, oddly uncomfortable, in his old classroom.

Dean, the photographer later recalled, “wasn’t a drinker. He smoked a lot, but everyone did in those days. What he was was an insomniac. He went to parties because he couldn’t sleep.”

One of Stock’s best known images showed Dean walking in the rain in New York’s Times Square, shoulders hunched to the elements and with a cigarette dangling from his lips.

The picture, published in Life magazine and reproduced many times since, was credited with defining 1950s cool and immortalizing the actor, who died soon after in a car wreck.

The pivotal moment of Stock’s early career came in 1951, when he won the top prize of a Life competition for young photographers.

Jay Reatard , a frenetic Memphis punk rocker, has died. He was 29.

Memphis police said in a news release Reatard — whose given name was Jimmy Lee Lindsey Jr. — was found dead in his bed early Wednesday. Police were investigating the death and hadn’t released a possible cause.

The Web site for his label, Matador Records, said Lindsey earned the attention of a Memphis independent record label after he began recording songs in his home at age 15.

He also gained a reputation for raucous, fast-paced live performances with bands the Reatards and the Lost Sounds, before recording and performing under the solo moniker Jay Reatard.

Matador said a typical Reatard set could include 18 songs played in 25 minutes.

Positive reviews of his most recent release, “Watch Me Fall,” were helping him earn a wider audience.

University of Pittsburgh Awarded $4.75 Million Grant to Improve Treatment of...