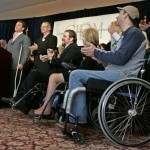 Deep-brain stimulation, a technique used for more than a decade to manage the symptoms of Parkinson’s disease, may help restore greater function and more natural movement to patients with spinal cord injuries that have left at least a few nerves intact, new research says.

A study published this week in the journal Science Translational Medicine showed that in rats whose spinal cords were partially severed, the implantation of a pacemaker in the brain’s mesencephalic locomotor region – a control center for the initiation of movement – restored the hind limbs’ ability to run and support weight to near-normal levels.

Rats who had almost completely severed spinal cords – equivalent to humans whose injuries make them dependent on wheelchairs for mobility – were able to move their legs and to walk in the water, where they got some help from reduced gravity.

The latest research explored an approach heretofore untried to improve the mobility of patients whose spinal cords have been grievously injured, but who retain some nerve fibers connecting the upper spinal cord to the legs. At the Brain Research Institute at the University of Zurich, the researchers asked whether a source of steady voltage implanted into the brain could help to boost the signals reaching the lower extremities of those with spinal cord injury enough to improve their ability to walk and support their body weight.

The idea of stimulating brain cells subdued by injury or disease has intrigued many researchers looking to treat brain disorders ranging from Parkinson’s and Alzheimer’s diseases to treatment-resistant depression. But the question of which of the brain’s diverse population of cells to zap has been a consistent challenge.

In this case, the authors of the study focused on the mid-brain tegmentum, a cluster of nerve cells extending down from the top of the brain stem, just in front of the brain’s rear-most structure, the cerebellum. The mid-brain tegmentum is one the brain’s most ancient and primitive structures, playing a similar role in initiating and maintaining movement in animals ranging in complexity from fish to man.

In rats whose spinal cords had been partially or near completely severed, the researchers sunk electrodes into this locomotor control center and zapped the mid-brain tegmentum with 50-Hz pulses. Among rats with a spinal cord that was 12% to 25% intact at the point of injury – rats who would initially be paralyzed and in time would regain the ability walk slowly and drag their hind quarters along – the deep-brain stimulation restored their ability to move and support themselves on their hind legs to near-normal levels.

Rats whose injuries left between 2.5% and 11% of their spinal cords intact at the point of injury also benefited, but less so. In the water, where they didn’t have to bear the full weight of their bodies, their legs engaged in stepping motions in response to the brain stimulation.

The authors of the study make clear that the patients who may benefit from this application of deep-brain stimulation must have not only incomplete spinal cord severance; those that have remaining medullary reticulospinal fibers within the central and ventrolateral funiculi (see this image) “have a good chance of benefiting [from deep-brain stimulation] in a way that could improve their daily life activities.”

Spinal Injuries Treated With Hypoxia: What Is This Promising (And Surprising)...

Is there any treatment?