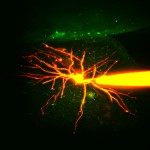 A team at the Institut de Neurosciences de la Timone (CNRS/Aix-Marseille Université) has just identified one of the molecular mechanisms responsible for this phenomenon. It has also proposed two therapeutic solutions that have proved conclusive in animals, one of which will be tested during phase II clinical trials as early as this year. This work, published in Nature Medicineon 14 March 2016, thus opens new therapeutic avenues to reduce this physical disability.

Twelve million people throughout the world suffer from a motor disorder called spasticity. It occurs following a spinal cord lesion (traffic accidents, stroke) or in the context of neurodegenerative diseases such as amyotrophic lateral sclerosis (or Lou Gehrig’s disease). Spascticity is mainly characterized by a hyperexcitability of motoneurons, the neurons in the spinal cord that control our muscle contractions. This hyperexcitability leads to simultaneous and uncontrolled contractions of the flexor and extensor muscles, rendering any locomotor movement difficult or even impossible. And the treatments available at present are unsatisfactory1.

Neuron excitability is partially triggered by the sodium channels expressed on their membrane. Their opening generates an input of sodium that causes the brief activation of motoneurons, causing a short-lived muscle contraction (Figure A1). In the case of spasticity, these sodium currents last longer and are described as “persistent”, thus causing neuron overexcitability. The team led by Frédéric Brocard at the Institut de Neurosciences de la Timone, has discovered that this hyperexcitability results from deregulation of the sodium channels in the neuron.

Indeed, rapid closure of the calcium channel normally occurs thanks to a “molecular loop” linked to the channel, which quickly obstructs it after opening (Figures A2 and A3). This sodium channel inhibition enables the control of motoneuron excitability. The scientists have shown that following a spinal cord injury, the activity of an enzyme, calpain, is upregulated. This enzyme inhibits the sodium channel, thus rendering the inactivation process inoperable (Figure B1). The pore then remains open, generating a prolonged and persistent sodium current (Figures B2 and B3).

Functioning of the sodium channel of motoneurons under normal conditions (A) and pathological conditions (B). Opening of the calcium channel triggers a current of sodium Na+ ions (A1), which is rapidly halted when a molecular loop in the protein blocks the channel pore (A2). This gives rise to brief excitation of the motoneuron, causing a short-lived muscle contraction (A3). Following a spinal cord lesion, calpain renders inactivation of this channel inoperable by inhibiting the loop responsible for its closure (B1). This results in a persistent calcium current, INaP (B2), generating prolonged excitation of the motoneuron and causing a sustained contraction of the muscle (B3).

The research team tested two treatments in rats affected by spinal cord lesions. One of the molecules was a calpain inhibitor. Its use during a short period (ten days) restored correct function of the sodium channel and sustainably reduced the degree of spasticity. Indeed, a month after the end of treatment, the positive effects on spasticity persisted.

The other molecule tested, riluzole, acts as an inhibitor of the persistent sodium current. It also reduces spasticity, although its effects remain temporary, insofar as the disorder reappeared two weeks after the end of treatment. The molecule is nevertheless of considerable interest because it can already be administered to patients with Lou Gehrig’s disease. Phase II clinical trials, scheduled to start this year at Hôpital de la Timone (Marseille, France), will be testing its efficacy in the treatment of spasticity in patients with spinal cord injuries. In parallel, Frédéric Brocard’s team will continue to decipher the phenomenon of spasticity – or more specifically the involvement of calpain in the deregulation of motoneurons – and to test other inhibitors of this enzyme that can be administered in humans.

1 The most widely used pharmacological treatment, baclofen, is not wholly successful in crossing the barrier between the blood and spinal cord. For this reason, patients need to take high doses orally, which causes severe adverse effects (sensory disorders, insomnia). The other treatments are restrictive (intramuscular injections that must be repeated every 2-3 months) or even irreversible (surgery of the affected nerves). As for physiotherapy, it can only achieve transient relief.