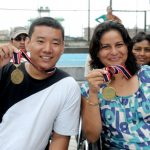 Digam Limbu, 23, had sustained spinal cord injury in a road accident in Qatar on August 28 last year. The accident changed Limbu´s life, who then worked in Qatar. His legs do not function and he is confined to wheelchair.

A year on, a happy moment came in his life as he won the title of a swimming competition of athletes with spinal cord injury on Sunday. Limbu clocked 39.98 seconds to complete 25 meters in the competition organized by Nepal Spinal Cord Injury Sports Association with assistance from wushu player Sami Lama and Buddha Prakash School, Jorpati.

“I´m happy to win the competition. It gave me hope that I can do everything despite my injury,” said Limbu.

Likewise, Sonika Dhakal, who met with an accident while playing on a swing six years ago and sustained spinal cord injury, stood first in the women´s competition. Dhakal completed the 25 meters in 40.98 seconds and was delighted at her victory.

“Since we can´t move our legs, we cannot maintain balance while floating on the water. Nevertheless, I overcame all that to win the competition. I´m happy,” said the girl from Kamalamai, Sindhuli.

There was tough competition among the differently abled athletes. Krishna Ram Chaudhary gave a tough competition to Limbu in the male section while Sita KC emerged an strong opponent for Dhakal. Chaudhary clocked 41.18 seconds while KC´s timing was 44.22 seconds.

Shiva Neupane was third in men´s section with 56.35 seconds and Ami Magar stood third among the women with a timing of 1 minute 49.34 seconds.

The differently abled athletes were divided into two teams — Black and Red — for water polo. Chaudhary, Dhakal, Magar, Laxmi Kunwar and Devi Acharya who were in the Black team won the match 4-1 against the Red team of Limbu, KC, Rekh Bahadur Karki, Rishi Dhakal and Manju Sapkota.

“It´s a kind of hydrotherapy for the injured. It not only helps boost them psychologically but also makes them feel stronger physically,” explained Dr Anil Bahadur Shrestha, consultant orthopedic surgeon at Nepal Orthopedic Hospital, Jorpati.

The association established by differently abled athletes in November has organized the swimming competition for the first time.

“We have been coming forward with different sports activities. We want to make the public know about our ability and also boost ourselves psychologically and physically,” said Kishor Bahadur Shahi, the president of the association.

Shahi, who is a sub-inspector in the Nepal Police, is also a spinal cord patient. He received two bullets in a clash with Maoist rebels at Masuriya, Kailali six years ago.

A Good Samaritan for the differently abled

Sami Lama is a national wushu player. She is in training camp for the upcoming 16th Asian Games. She had training session in the evening at the Dasharath Stadium on Sunday.

She also had a busy morning session as she was assisting differently abled athletes with spinal cord injuries at the swimming pool of Club Mosses, Jorpati.

“There are many differently abled people in my surroundings and I was aware of their ability. I always wanted to support them and so idea of this event came forward,” said Lama, who sponsored and supported the event along with Buddha Prakash Secondary School.

“My father is the founder of the school and he has been inspiring me for social work,” explained Lama.

Lama competed in the 11th South Asian Games in Sansou 52 kg and finished fourth while she claimed bronze medal in the South Asian Wushu Championship in Bangladesh. However, she switched to the chanchwan event of wusu thaulo for the Asian Games selection.

“After watching this event so closely, I got inspiration to do more in my own game,” said Lama.

Lama was recently crowned Miss Tamang in a beauty contest. “I want to give my best wherever I engage or participate. I´ll try every faculty of my interest and try to give my best,” said Lama.

Why We Need More Stories of Disability That Aren’t About Overcoming...

Murderball: This documentary is the wheel deal