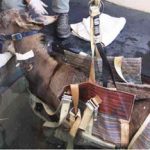 Eli the donkey’s recovery from incomplete quadriplegia could be the most important breakthrough in traumatic spinal-cord injuries and for the stem-cell treatment that restored his mobility—a breakthrough that could impact not only equids but all mammals, including humans.

Quadriplegia is considered incomplete if there is lack of mobility yet some sensory or motor function below the affected area.

On May 13, little Eli was inexplicably savaged by his longtime companion Watson, a jack nearly twice his size. During the attack, Watson grabbed Eli by the neck and shook him furiously like a rag doll, which caused severe spinal-cord trauma midway down his cervical spine.

Over the next few days, as Eli’s spinal cord swelled from the trauma, he experienced a rapid progression of weakness in his front end and hindquarters. With Eli’s condition quickly deteriorating, attending veterinarian Steve Goss, D.V.M., recommended that Eli be sent about 30 miles away to Alamo Pintado Equine Medical Center in Los Olivos, California, for specialized treatment. Alamo Pintado’s staff is credited with overcoming nearly insurmountable odds to save the lives of major stakes winners Thorn Song and most recently Global Hunter (Arg).

Eli arrived at Alamo Pintado on May 18, weak and unstable on all four legs.

“We did a normal treatment of [dimethyl sulfoxide], anti-inflammatories, and hyperbaric oxygen therapy, but he was deteriorating very fast right in front of us,” said Doug Herthel, D.V.M., Alamo Pintado’s founder and chief of staff. “So on May 22, Dr. Carter Judy did an MRI, and that gave us the definitive diagnosis.”

Eli suffered severe trauma to the spinal cord and its blood supply, and the resultant swelling caused compression of the cord within the spinal canal. The diagnosis was delivered by veterinary radiologist Travis Saveraid, D.V.M.

Herthel also sought the opinion of Mike Kistler, M.D., in Cortez, Colorado, a senior member of the American Society of Neuroradiology with more than 25 years of experience in human spinal trauma. Kistler also is a horseman who considered a career in veterinary medicine before turning to human neuroradiology.

“In a human, a comparable injury would have been sustained by diving into shallow water, and the majority of those injuries would have a poor prognosis, with paralysis,” Kistler said.

Kistler’s interpretation of the MRI results was that Eli’s spinal cord had suffered significant bruising and circulation damage, and that the prognosis was poor. Kistler speculated that it would be unlikely that Eli’s injury would resolve on its own, even with traditional treatment. Moreover, because an equid’s overall health declines when it cannot stand, he felt Eli most likely would not survive his injury or its complications.

Under the supervision of internal medicine specialist Tania Kozikowski, D.V.M., Eli received intense supportive care, treatment with anti-inflammatories to reduce the swelling in his spinal cord, and 24-hour-a-day nursing. Yet his condition continued to decline rapidly. On May 24, he lay paralyzed in all four limbs and could not lift his head, urinate, or defecate. He had developed pneumonia and was unable to maintain his body temperature, even with supportive care. Eli was on the verge of death.

Herthel is a pioneer in stem-cell therapy. Over the past 15 years, he has treated more than 5,000 horses with good results. But the bulk of these cases have been tendon and ligament injuries, and more recently laminitis and arthritis. He knew of no research to support the use of stem-cell therapy as a treatment for spinal-cord injuries. But, in theory, it made a lot of sense to him.

“The option to use stem cells was based on what we know adult stem cells can do—promote angiogenesis [formation of new blood vessels] and anti-inflammatory action,” Herthel said. “These injuries to the spinal cord created a lack of circulation and blood supply, which would cause cell death. Eventually, you just end up with a sac of fluid where the injured spinal cord used to be. So our goal was to get rid of the inflammation, similar to what we would use corticosteroids for. But more important were the angiogenesis properties of the mesenchymal stem cells and their ability to protect the cells in the spinal cord and promote the growth of new cells. They also inhibit the formation of scar tissue.”

On May 25, Herthel presented Eli’s owner with the option of euthanizing her beloved pet or opting for the experimental stem-cell therapy. She chose to give Eli one last chance.

“We had to do something fairly rapidly, and it was an extreme longshot,” Herthel said. “We had nothing to lose, but, still, we were extremely nervous.”

Within 48 hours, Eli improved and began to show some movement, even while recumbent. But he had lost significant muscle mass and was extremely weak. Fortunately, Eli never lost the ability to eat, so Herthel’s staff was able to maintain his nutrition as part of his supportive care, while treating his pneumonia with antibiotics.

“Eli’s owner drove 60 miles round trip daily to visit him and to provide lots of carrots, horse cookies, and TLC,” Herthel said.

On June 1, Eli had improved to the point where he was able to urinate, so his catheter was removed. The next day, he was lowered into Alamo Pintado’s recovery pool via sling, just to get him upright. Unfortunately, he was still not able to stand even with its support.

The first significant indication that Eli was responding to the stem-cell treatment came on June 8, when he was able to stand in his stall with the help of two veterinary technicians.

The effects of the first stem-cell treatment began to decline on June 10, when attendants noted that Eli had begun to weaken and was unable to stand, even with assistance. Herthel said this was not unexpected.

“We know that these stems cells do their work, but they don’t last forever, so we have to retreat several times,” he said. “It seems that after three treatments is when we see the biggest benefit, based on our experience with joint treatments.”

But the big moment of celebration came on July 31, when attendants found Eli standing in his stall.

“We couldn’t figure out how he got up,” Herthel said. “So we went back and looked at the [intensive care unit] video, and we saw him get up on his own. It wasn’t pretty, but he got up, and that’s what counts. After that third treatment, he just got better and better, and his muscle mass came back.”

Eli was released to his owner on September 15. He continues to improve on her Santa Barbara-area farm, being turned out during the day to romp in his paddock and housed in his stall at night. Herthel said he expects Eli to enjoy a normal existence, barring unanticipated complications later in his life.

Not only has this case opened the door for use of stem-cell therapy in treating traumatic spinal-cord injuries in all species, it has provided important knowledge to further this research. One essential theory that Eli’s case has confirmed is that adult stem cells, even from a donor, do not evoke an adverse reaction.

“Each time we gave the stem cells, we took a sample of Eli’s spinal fluid, and it was normal,” Herthel said. “You would think that giving foreign cells from a horse would cause some kind of inflammatory reaction, especially in the spinal fluid. But each time, Eli’s spinal fluid was normal, and that’s pretty amazing. That’s what makes these adult stem cells so useful.”

Skeptics will claim that anecdotal evidence of the successful treatment of one animal does not prove that stem-cell therapy was responsible for Eli’s cure. Kistler disagrees.

“The fact that Eli recovered after this initial injury over two to three months would indicate that the intervention is what promoted the recovery,” he said. “I think that’s a fair assumption.”

Herthel acknowledged that science cannot be based on a single case study, but he believes that Eli’s story will open the door to further research.

“This case breaks a barrier,” Herthel said. “We’re certainly not going to be afraid to use stem-cell therapy again if we have an animal with spinal-cord damage because we know it’s safe.”